Birthplace of a Revolution

It's a nondescript, sleepy town miles away from anywhere, but Sidi Bouzid sparked the flames of rebellion across the Arab world.

Birthplace of a Revolution

It's a nondescript, sleepy town miles away from anywhere, but Sidi Bouzid sparked the flames of rebellion across the Arab world. 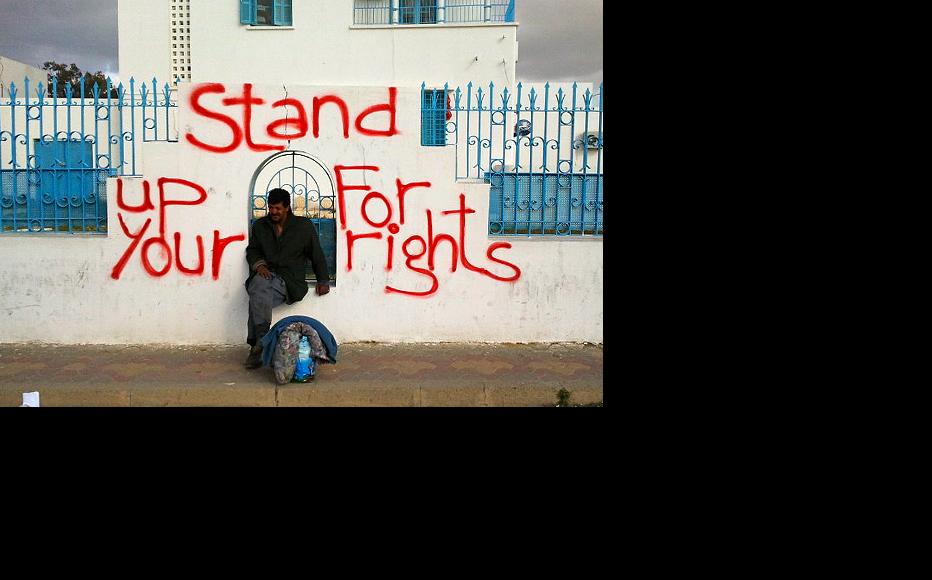 Sidi Bouzid residents blazed a trail for Tunisians desperate to better lives. (Photo: Susanne Fischer/IWPR)
The link has been copied

So this is where it all began. Before Mohamad Bouazizi, 26, set himself on fire in protest over his hopeless economic plight on December 18, Sidi Bouzid was a sleepy, little-known town in central Tunisia. But a town whose desperation so reflected Tunisia's condition that Bouazizi's cris de coeur ignited a revolution which swept dictator Ben Ali out of office and out of the country in less than a month.

It is a three-hour drive to reach Sidi Bouzid from Tunis, and yet it feels like a different world. People wearing traditional thick brown felt coats - to protect them from the harsh wind sweeping off the surrounding plains - walk down the streets, many of the men with turban-like, white scarves around their heads. Most of the women wear hijabs. There's a sense that this place has been forgotten - just as so many small towns in overly centralised states are overlooked and left to fend for themselves.

We park in front of the local governorate where a crowd gathers for the daily protest that you find everywhere across Tunisia these days. The dictator fell, but most of the day-to-day problems remain unsolved. People still don´t have jobs, old structures and bureaucracies remain. Getting rid of the legacy of a dictatorship takes time and patience.

A man walks towards us and asks, "Are there any journalists from France 24 present?" When we say no, he walks on. France 24 was, along with Al-Jazeera, the first TV channel to cover events in Sidi Bouzid, even when the town was under siege by Ben Ali´s security forces.

A few hundred metres further on, tall and golden, is a monument erected in honour of Bouazizi, dubbed by many as the hero of the Tunisian revolution. A Facebook group is even calling for him to be named TIME magazine's "Man of the year".

His picture hangs on the top of the column, looking down on the main street of the town that had so little to offer to him.

A university graduate, he never found a job in his field - like approximately one third of young, educated Tunisians - and his attempts to make a living by selling vegetables in the street were constantly thwarted by corrupt police who would seize his merchandise unless he paid them off. "Unemployment = humiliation", reads a hand-written piece of paper tacked to the monument.

We are here to meet with the young team behind Radio SB Zone, a tiny local web-based radio started by a group of friends in 2005. Anis Chorabi, one of the five founding members, directs us to one of the few cafés in town that allow men and women to mingle. At ten in the morning, the place teems with young men smoking Shisha and trying to make a cup of coffee or a coke last as long as possible to kill another long jobless day.

Why did they decide to start a radio? "Because there was absolutely no news about Sidi Bouzid and the region whatsoever. Even when there was a murder in town, nobody would know about it - we lived in a constant news black-out," Anis says.

Of course they suffered from many restrictions under the "ancieme regime", which is how people now refer to the presidency of Ben Ali. Politics were taboo, so people mainly talked about cultural and social matters. Or, as many opposition journalists in Tunisia call it, para-politics. They knew they were being monitored.

When Radio SB Zone was planning a special report on the role of bribes in daily life, they were warned to stay off the topic. When they applied for an FM license, Anis recalls, "We were told we could have it if we agreed to fully support the ruling RCD party of Ben Ali." They opted to stick to the internet and remain independent.

All the station's members work from home on their personal computers and have other jobs. The webmaster is a hairdresser, Anis a sports trainer. They taught themselves how to set up a website and how to stream audio files. Today, they have a network of correspondents in the region, all volunteers who phone in reports. If anything happens in Sidi Bouzid, they are the first to know: people call them or send text messages. "They know we are really here for them and listen," Anis says.

"Yeah, not like the State TV," his colleague Daly interjects. "A few days ago one of their teams was here, allegedly filming people protesting - but the cap was on the lens the entire time."

When we return to our car, we spot a group of men standing around an old man on crutches with a bottle under his arm. He is yelling towards the governorate building. "Do we have to set ourselves on fire for you to listen to us?" He raised the bottle, which probably contained alcohol. "I am ready. Hear me, I am ready!"

The men around him argued with him. He continued yelling for a while, then hobbled away and disappeared.

The Arab Spring
Tunisia
Protests
Connect with us