A series of blasts in Moldova’s separatist region have heightened fears of regional destabilisation. 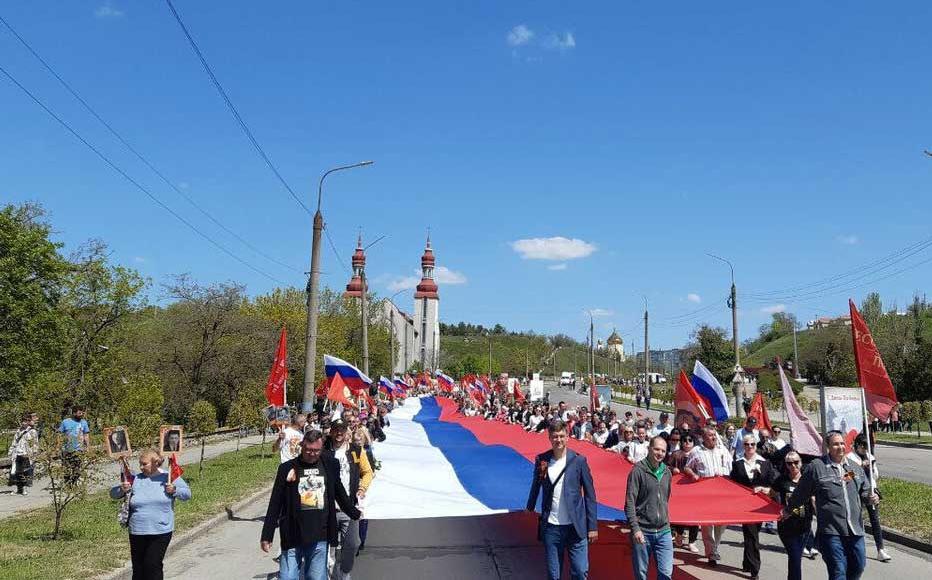 In occupied Berdyansk, in southern Ukraine, Russians marked 9 May bringing back Soviet-era symbols and Russian Federation flags. © Readovka News
The link has been copied

Only around 500 people gathered in Berdyansk’s main sports complex for the commemoration of the May 9 defeat of Nazism. About 50 of the participants were employees of the occupation administration; the rest were pensioners apparently hoping to get some humanitarian food aid.

The rally then moved to the Eternal Flame Memorial, which honours the soldiers who died in World War II. A concert with Russian songs was followed by an evening firework display. The occupying administration delayed the curfew in honour of the occasion.

Proceedings were broadcast on Russian TV as supposed evidence that the residents of the port city on the Azov Sea had welcomed the occupying forces.

"The Russians cordoned off the city centre with military equipment, public transport did not run, the central market did not work. Thus, nothing prevented the performance,” a local told IWPR, adding that they had perhaps feared unrest.

Commemoration events to mark the end of World War II, known both in the Soviet-era and in present-day Russia as the Great Patriotic War, were held across all of the occupied territories in eastern and southern Ukraine.

In Kherson, Nova Kakhovka, Melitopol, Berislav and even Mariupol, patriotic songs were sung, flowers were laid and there were marches with the Russian flag. Everyone got a day off.

May 9 has become central to the justification for the invasion of Ukraine. The highly symbolic, militaristic holiday, when it is customary to praise the power of Russian weapons, rarely mentions the contribution of other nations or the role of the West in defeating Nazi Germany.

In a video released on May 9, President Volodymyr Zelensky honoured the sacrifice of millions of Ukrainians in World War II, defying the Kremlin narrative of the “de-nazification” of Ukraine.

“Our enemy dreamed that we would refuse to celebrate May 9 and the victory of Nazism,” he said. “Millions of Ukrainians fought against Nazism and went through a difficult and long journey… we will not allow anyone to annex this victory. We will not allow it to be appropriated… We will not give anyone a single piece of our history.”

Life in Berdyansk, with the frontline not far away, had become "dull and dim," a local resident told IWPR.

“In two months, Berdyansk has aged several decades,” the local continued. “Soviet military songs are played on the radio, Russian TV channels are broadcast, communication is constantly disconnected, the internet is already a luxury.”

Some 110,000 people lived in Berdyansk before the February 24 invasion, but it is difficult to say how many remain in the city; people tend to stay put in their apartments. The fear of arbitrary arrest is real, with whoever is perceived to hold active pro-Ukrainian positions risking ending up behind bars. Nonetheless, pro-Ukrainian graffiti and leaflets have become regular features in the occupied territories.

A resident described daily life with “no jobs, no studies, skyrocketing prices in the city's markets, and a humanitarian and information blockade”.

Left with few options, every day hundreds of people try to leave and reach areas controlled by Ukraine. The ongoing fighting in Zaporizhia region and the numerous checkpoints make the journey difficult. Private drivers are afraid to pick up strangers, regardless of the money they offer.

On the eve of May 9, the price to travel from Berdyansk to Ukraine-controlled Zaporizhia, about 205 kilometres north-west, hiked from 32 US dollars to between 200 and 250 dollars. Traveling to Georgia through Russian-occupied Crimea costs about 600 dollars. Locals are hoping that prices will fall after May 9, and they will be able to get out.