Broadcast of pornographic images of activists coincides with attempts to stage Arab Spring-style protests against the regime.

Broadcast of pornographic images of activists coincides with attempts to stage Arab Spring-style protests against the regime. 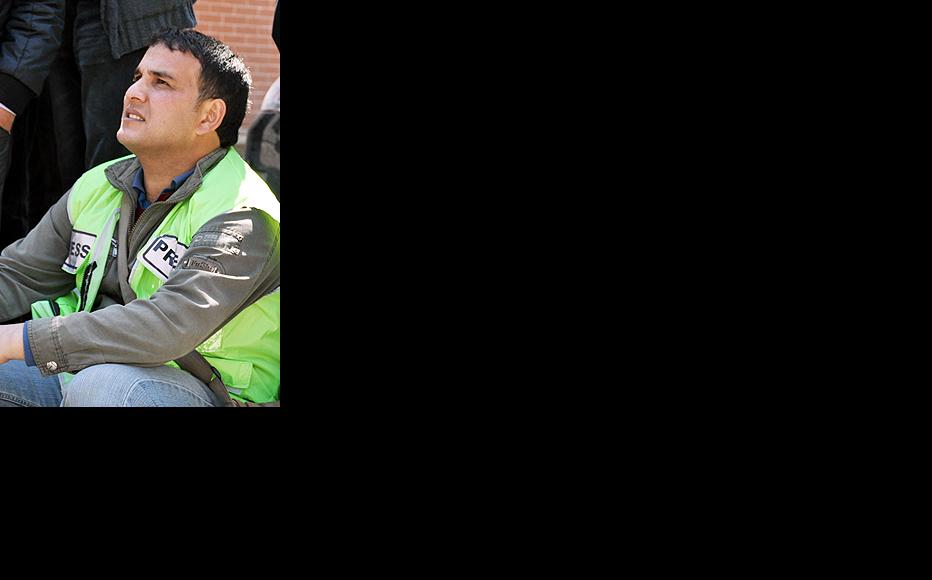 Natiq Adilov, a journalist from Azadliq and press spokesman for the National Front of Azerbaijan party, is said to have featured in the secretly-filmed videos. (Photo: IWPR)
The link has been copied

Azerbaijan opposition activists have pledged to sue a television station that aired what are said to be secretly-recorded footage of them engaged in sexually explicit activity in hotel rooms.

The alleged clips, which were also posted on the internet and emailed to journalists, separately featured Natiq Adilov, a journalist from Azadliq and press spokesman for the National Front of Azerbaijan party, and Qan Turali, founder of www.kulis.az.

They were broadcast on Lider TV, a channel owned by Adalat Aliev, cousin of President Ilham Aliev, and came at a time when opposition activists have attempted to emulate the mass protests in Arab countries to force a change of government.

“We were travelling to an international security conference, organised by the German organisation Conrad Adenauer Stiftung in the Afra hotel in Oguz,” Adilov said. “We are not the first people to be targets for Lider TV. But I do not intend to leave this defamation unpunished. I intend to sue them. And if I do not find justice in local courts, I will go to the European Court.”

He said he would also sue the Afra hotel and the National Council of Television and Radio Broadcasting, NCTB, which took no steps to halt the broadcast even though it appeared to be illegal.

“After the amendments to the constitution in 2009, according to 32nd article, video films made without the permission of their subject are illegal,” Alesker Mammadli, a lawyer from the IREX organisation, said.

The NCTB is technically independent, but is funded by the state and all nine of its members are appointed by the president. Since it was created in 2003, its head has been Nushiravan Maharramli, whose assistant Togrul Mammadov agreed to speak to IWPR.

“The whole council together will take a decision on the legality or illegality of the broadcast material together. However, this fact has not yet been discussed by the council,” he said.

Tavakkul Dadashov, head of the NCTB’s monitoring department, told IWPR, however, that the public had a right to know what opposition figures got up to in their spare time.

“These individuals are public figures, and people are interested in knowing them better. In their articles, they criticise others, instruct them. Lider TV showed that the moral level of these people is not that high either. Of course, from an ethical point of view, I think they should not show such intimate pictures on television. However, judging the legality of these films or their broadcasting is not our job,” he said.

That was not good enough for Intigam Aliev, lawyer for Adilov.

“If such outrages get on air, and not for the first time, and the NCTB take no steps against the TV channel, and the prosecutors refuse to investigate the use of a hidden video camera, and the invasion of someone’s private life, you have to ask whether this is all happening with the approval of the state. I think this is all done specifically to lower the authority of these public and politically-active figures,” he said.

This was not Lider TV’s first foray into this kind of reporting. In the run-up to parliamentary elections in November last year, it broadcast allegedly secret footage thrice daily of Azer Ahmadov, the then director of Azadliq, in intimate relations with a young woman. Before elections in 2005, it broadcast what were said to be photographs of Ahmadov and Azadliq’s editor-in-chief Ganimat Zahid in the company of prostitutes. Lider TV insisted, however, it just reports the news, and is not engaged in a smear campaign.

“These people are well known in society. And they should correct their own actions, rather than tell other people what to do. We haven’t slandered anyone, we’ve just shown information about some real-life facts,” Tofig Abbasov, director of Lider TV’s news programme, said.

The channel has never been censured for its close coverage of opposition figures’ private lives, but experts wonder whether this time it had gone too far.

“In transitional countries like Azerbaijan you often see below-the belt attacks on political opponents. In all these cases, laws were broken. Pornographic images were shown, and at prime time. This means a criminal offence was committed against these people, and against the viewers watching the television,” Zeynal Mammadli, a journalism professor at Baku State University, said.

“If the insulted people take this through the whole criminal process, they will definitely win. Even courts dependent on the government cannot refuse to satisfy this case.”

The Afra hotel insisted that it was not to blame for the films that were reportedly made in its rooms, and its director Mesme Sultanova herself said she would call in the police to investigate what had happened.

“This terrible incident has severely harmed the image of our hotel. We are suffering losses, losing clients. How could I want this to happen? I cannot imagine how they installed hidden cameras in our rooms. I myself intend to appeal to the law enforcement agencies to find out who decided to harm our hotel in this way and why,” she said.