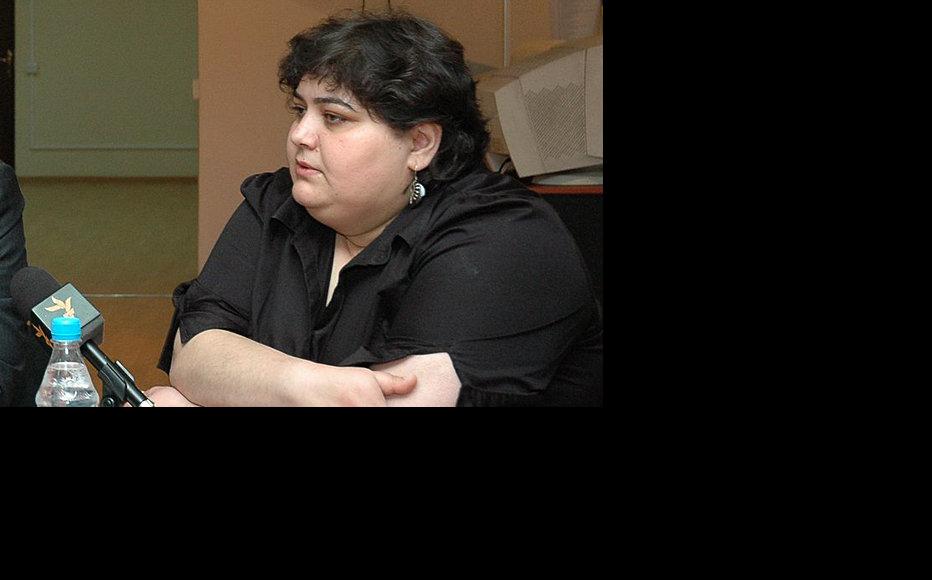 Khadija Ismailova. (Photo: Shahla Sultanova)
The link has been copied

Khadija Ismayilova, an Azerbaijani journalist famous for her investigations into the ruling Aliyev family, has said she will carry on regardless of blackmail, threats and a spy video posted on the internet.

“I have not done anything bad. I am investigating the true situation in this country. It is not I, but those who interfere in my private life who should be embarrassed,” she told IWPR.

O On March 7, Ismayilova received a letter with the words “behave, whore, or you will be shamed”, along with an envelope of photos taken inside her house of her engaged in sexual activity. The same letter was also sent to two opposition-leaning newspapers, which did not publish the pictures.

On March 14, after Ismayilova stated said in public that she would ignore the threats, video footage – again clearly filmed with a spy camera – inside her home, was posted on a website ostensibly linked to Musavat, an opposition party which has a newspaper of the same name. Both denied any connection to the website, but many internet users were clearly misled into believing they were responsible for carrying the video, judging by the angry comments they posted.

Ismayilova believes the underhand campaign against her is a consequence of her investigations into high-level corruption in Azerbaijan. Her recent report into the business activities of President Ilham Aliyev’s daughters, published by RFE/RL, was one of the very rare Azeri-language articles to discuss the first family.

After receiving the threatening letter, Ismayilova requested the interior ministry and prosecution service to investigate the matter.

Interior ministry spokesman Ehsan Zahidov confirmed that this was happening. That would make this the first case where the government has looked into the blackmailing of journalists.

Eleven international media and human rights organisations including Article 19, the Committee to Protect Journalists, Reporters Without Borders, Index on Censorship and Human Rights Watch have signed a statement condemning the smear campaign and insisting on a full investigation.

“Khadija Ismayilova is being subjected to a vicious campaign with the sole purpose of undermining her as a journalist and silencing her critical opinions,” Article 19’s executive director Agnès Callamard said. “By using sexual images of Khadija Ismayilova, those wanting to blackmail her appear to specifically target her gender, as such tactics in a society like Azerbaijan are likely to have particularly damaging repercussions.”

“The Azerbaijani government must take immediate steps to investigate this personal attack and to ensure the climate in which these types of threats can occur ceases to exist,” Callamard added.

Officials were quick to deny any connection to the blackmail attempt.

“The government’s duty is protect its citizens, not to blackmail them,” Elnur Aslanov, a government spokesman, told IWPR.

Ismayilova said she did not believe these protestations of innocence. The government was just trying to calm a storm of international criticism that it had failed to anticipate.

“Their response is them trying to protect themselves. They made a mistake – they didn’t count on the public reaction. They didn’t expect so many organisations to react to their actions. Now they are stepping back,” she said.

Ismayilova said she was sure officials were behind the threats against her. She noted a hostile article about her that was published in the government’s Yeni Azerbaijan newspaper in the days between her receiving the letter and the video being posted.

“No ordinary citizen of Azerbaijan is powerful enough to make those newspapers write a critical article about me,” she said.

The Yeni Azerbaijan article made several unsubstantiated claims that Ismayilova led a life inappropriate for an Azerbaijani woman, it accused her late father of having made money by blackmailing people, and it claimed she had left a job at the broadcaster Voice of America after a scandal there. It also said that the After Work programme which she hosts on RFE/RL was biased.

Hikmet Babaoghlu, editor-in-chief of the newspaper, denied any connection to the blackmail, saying the newspaper had been planning to run the article for a long time.

“We live in a democratic society, where we can write an article and criticise anyone. So we did so,” he said.

Babaoghlu declined to answer a question about why it was felt necessary to make claims about the journalist’s private life, saying all the relevant information was in the story.

On March 15, the pro-government paper Iki Sahil newspaper also ran an article on Ismayilova – this one claiming her grandmother was Armenian, and that she was immoral and therefore unable to defend the rights of Azeris. Ismayil Hajiyev, the paper’s deputy editor-in-chief said the paper had decided to write about the journalist because she had become famous.

And Rashid Hajili, director of the Institute of Media Rights, shared Ismayilova’s belief that the attack on her originated high up in the government.

“The fact that articles appeared in two government newspapers makes me believe this originated in the government. The one in Iki Sahil explicitly promoted the video,” he said. “I’m not optimistic that it will be investigated properly.”

Hajili said it was only the robust response from RFE/RL and international organisations that forced the authorities to launch an investigation at all.

Bahar Muradova, deputy secretary of the ruling Yeni Azerbaijan Party and one of the few women in parliament, said it was unreasonable to accuse the government of for threatening her.

“The Azerbaijani government is not so miserable as to fight with a journalist, especially a female journalist, in such an ugly manner,” she said. “It is unacceptable to interfere in someone’s private life like that. Those behind it should be found as soon as possible.”

Ali Hasanov, who heads the political affairs department in President Aliyev’s office, told journalists the case would be investigated thoroughly.

“Those behind the threat and blackmailing must be held to account,” he said.

But rights activists in Azerbaijan doubt that the full scale of the crime – for example the installation of hidden cameras in Ismayilova’s apartment – will be fully investigated. The Baku city prosecutor is only looking into threats made against her, not blackmail or invasion of privacy.

Arzu Abdullayeva, head of the national committee of the Helsinki Citizen’s Assembly, has written to President Aliyev asking for a full investigation.

“It is disgusting. Khadija’s courageous work should be valued, not subjected to blackmail. People are very angry about it. Those who signed our petitions wanted us to go further in our criticism,” she said. “A journalist gets blackmailed for her work. I don’t want Azerbaijan to be associated with things like that.”