Government forced to respond to strength of public feeling after young conscript dies.

Government forced to respond to strength of public feeling after young conscript dies. 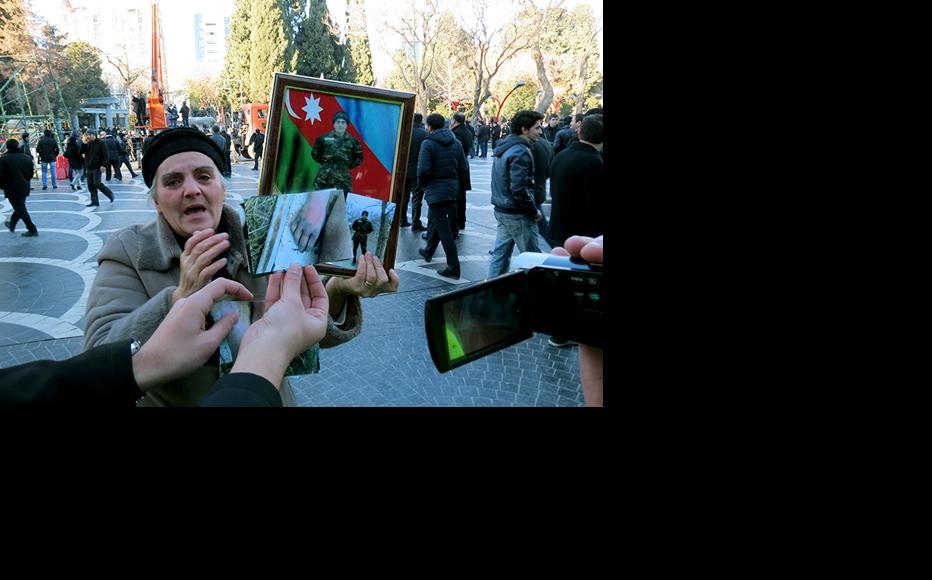 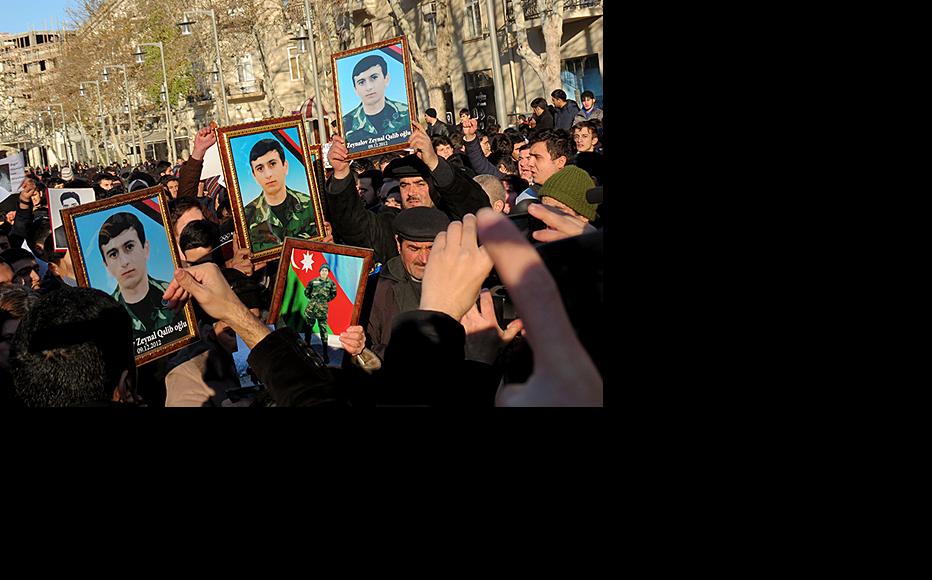 These placards show another soldier, Zeynal Zeynalov, who shot himself in December, and Gubadov (standing in front of a flag). (Photo: Idrak Abbasov) 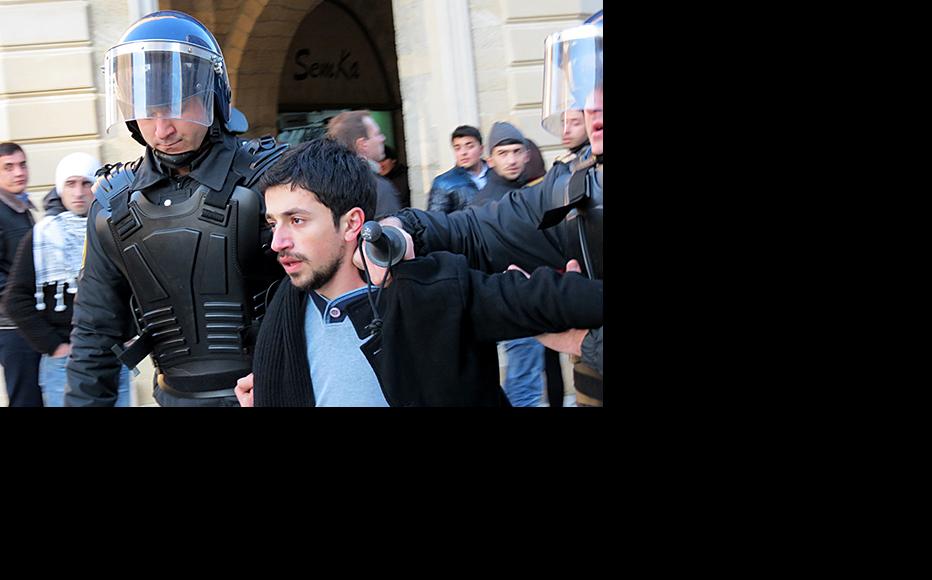 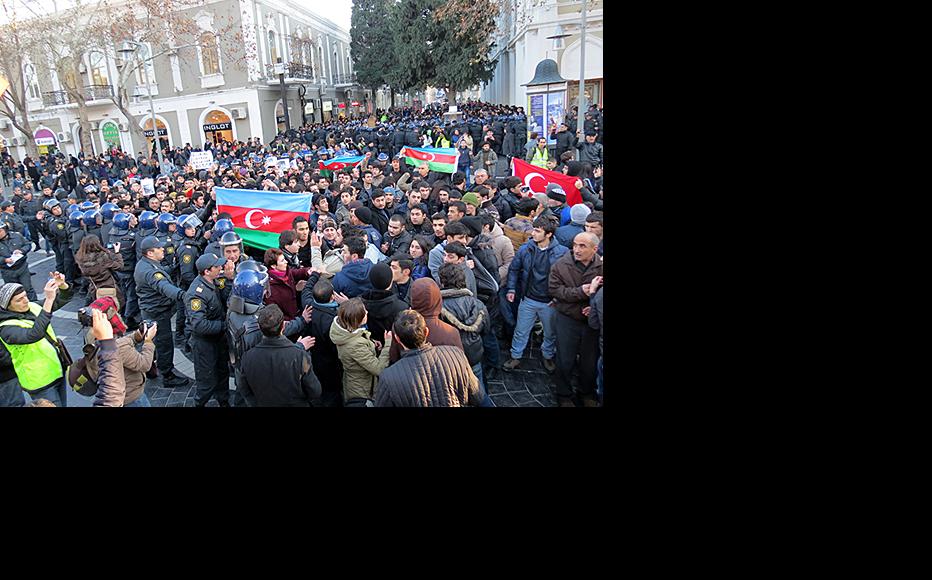 The demonstration reflected widespread anger over the treatment of army conscripts. (Photo: Idrak Abbasov)
The link has been copied

The death of an 18-year-old army conscript has roused Azerbaijanis to action, with thousands attending a rally last weekend to demand that the government account for his death properly.

Jeyhun Gubadov had served only three months in the army, and his death on January 7 under as yet unexplained circumstances was the latest in a series of similar tragedies.

Campaigners for army reform say that the Azerbaijani military is rife with bullying, and that many soldiers die at their own or others’ hands.

Doktrina, a research centre that covers defence affairs, says that of the 77 non-combat deaths in the military last year, 19 were suicides, 16 in car crashes, 14 from illness, 11 “while breaking the law”, eight from unspecified accidents and one was unexplained.

In this latest case, prosecutors initially wrote off the cause of death as a heart attack, but were forced to backtrack after photos and video material appeared showing signs of violence on Gubadov’s body.

His mother Samira issued a public call, saying “my son was beaten to death, help me punish the culprits”, which went viral on social media networks.

Facebook and Twitter posts helped organise a demonstration in central Baku on January 12. Given that such gatherings are illegal unless the authorities grant prior permission, the rally was surprisingly large, with journalists estimating that 2,000-3,000 people took part. (See Azerbaijan Protesters Face Harsh Penalties on recent legislation designed to deter people from taking part in such demonstrations.)

Unusually for Azerbaijan, the public anger felt across the country had an effect on the authorities.

Two soldiers from Gubanov’s unit, Lieutenant Veysal Agayev and Mugaddas Gurbanov, a professional rather than conscripted other rank were arrested.

Defence Minister Safar Abiyev formally reprimanded General Rovshan Akbarov, in command of the area where Gubadov was serving, demoted the base commander, Polad Hashimov, from colonel to major, and sacked the deputy commander.

“Only the hardest heart could fail to sympathise with this grief. We therefore we understand and sympathise with all honest people who are saddened by Jeyhun’s death,” he said.

Mubariz Gurbanli, a leading member of parliament from the ruling Yeni Azerbaijan party, also attempted to catch the public mood by expressing understanding for the January 12 demonstration.

“This youth protest on Fountain Square following Jeyhun Gubadov’s death was a peaceful one. The participants spoke, and their voices were heard,” he said.

Not by the police, apparently. Around 120 participants were detained, some of them driven 50 to 100 kilometres out of the city and dumped there to find their own way back.

The Institute for Reporters’ Freedom and Safety in Azerbaijan said that several journalists were prevented from doing their jobs, including the organisation’s head Emin Huseynov, punched in the chest by a policeman when he tried to use a camera.

“These people went out to protest against the death of a soldier, in fact against his murder. And they are being fined for it,” activist Parviz Azimov said. “So we have decided to collect the money together, and in five-gepik coins. I hope it makes them ashamed of themselves.”

Although the protest was not overtly political, Ali Kerimli, head of the opposition Popular Front party, expressed his support and said it was time the government stopped ignoring the death of soldiers.

“It wouldn’t actually be hard to stop these cases. It’s just a question of establishing parliamentary and civilian control over the army, and of bringing those guilty of every death to justice,” he said. “That means the courts would have to be independent…. The government must acquire the will to undertake serious reforms of the army. That is unavoidable, otherwise the people will speak out, which won’t be good for the government at all.”