Azerbaijanis on Both Sides of Syrian Conflict

Religious affiliation – Shia or Sunni – determines which side volunteers take. 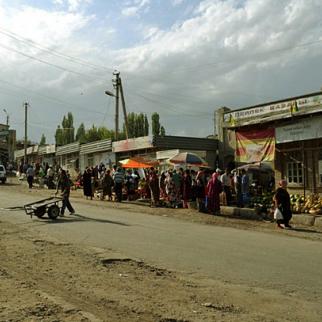 A handful of young men have left Batken province in southern Kyrgyzstan in the hope of joining the Syrian rebels. This is Isfana, in the same province. (Photo: Nataev/Wikimedia)

Azerbaijanis on Both Sides of Syrian Conflict

Religious affiliation – Shia or Sunni – determines which side volunteers take. Images that appear to show Azerbaijani fighters in Syria, taken from video on FIsyria.com, a Russian-language jihadi website.
The link has been copied

It has emerged that Azerbaijani nationals are among the foreigners fighting in the Syrian conflict. Video footage shows Azerbaijanis among the rebel forces, and a number have been reported killed.

While most seem to come from Azerbaijan’s Sunni Muslim minority, and gravitate towards radical Islamic militias, some members of the Shia majority are on the other side, fighting for the government of President Bashir al-Assad.

Militant jihadi websites report that at least 100 citizens of Azerbaijan have died fighting against the Assad government.

One recent casualty was Nijat Seyfullayev, an 18-year-old from the town of Gusar in northern Azerbaijan who was a student in Cyprus before he travelling to Syria and joining the Sunni Islamist group Jabhat al-Nusra.

“At first Nijat was just an ordinary bloke,” Bahaddin Aliyev, one of Seyfullayev’s former course-mates from university, wrote on his Facebook page. “But at the end of the first term, he began growing his beard. It seems he’d linked up with Wahhabis [Sunni fundamentalists]. Then he started sleeping at the mosque… and one day, he just vanished, and we didn’t know where he had gone. When we saw his photo and the report, we recognised him.”

Najaf Karimov, who was just 14, also died this month. He came from Sharur in the southwestern Nakhichevan region. His aunt Gunel Babayeva confirmed his death to IWPR, saying he had been fighting alongside his father in the Jaish al-Muhajirin wal-Ansar group.

An IWPR journalist on a reporting trip to Syria discovered that Azerbaijanis on the anti-Assad side mainly join Jabhat al-Nusra or Jaish al-Muhajirin wal-Ansar. The latter group is drawn from foreigners, and even had a special commander for Azerbaijani volunteers whose nom de guerre was Abu Yahya al Azeri. He is reported to have been killed recently.

The Azerbaijani fighters are generally based in the cities of Aleppo and Idlib. This is partly because their language and customs are similar to those of the local Syrian Turkmens, and partly because these cities are close to the Turkish border, and thus more accessible for new arrivals.

A local Turkmen militant who asked to remain anonymous told IWPR that volunteers cross the border from Turkey either at Cilvegözü or at Reyhanli, and are met and taken to training camps.

Although Karimov was from the southwest, most of the anti-Assad fighters come from northern Azerbaijan, which is mainly Sunni.

“My son Rashad Mammadov is currently in Syria. He’s fighting there,” Zakariya Mammadova, from the northwestern Zaqatala district, told IWPR. “He’s fighting for Allah, for Muslims.”

Another mother, Khajjat Qadirova, from Khachmaz also in the north, said she thought her son Rizvan Suleymanov was just going to the Azerbaijani capital Baku to make some money. She only found out he had gone to Syria later on.

The rest of Azerbaijan is predominantly Shia, like Iran to the south. Tehran and its Lebanese ally Hezbollah are backing Assad, and a number of Azerbaijani nationals are said to have travelled via Iran to join Syrian pro-government forces.

Kavkaz Centre, a website linked to Chechen rebels, reported that these pro-Assad fighters were students from Azerbaijan’s southern Lenkoran region who had been studying in the Iranian city of Qom. While this report needs to be treated with caution since the website favours Syria’s Sunni Islamists, independent experts agree that some Azerbaijani volunteers have sided with Assad.

Arif Yunusov, a leading political analyst and religious historian, told the www.haqqin.az website that the media in Azerbaijan had largely ignored this aspect of the conflict.

“According to information that I have, Azerbaijanis are coming into Syria from two directions – Iran and Turkey. Those entering Syria from Turkey join the militant groups, and those from Iran join Hezbollah or the Iranians,” he said.

Both Azerbaijan’s foreign ministry and the Iranian embassy in Baku said they had no information about any Azerbaijani nationals fighting for pro-Assad groups.

Foreign ministry spokesman Elman Abdullayev pointed out that his country’s Damascus embassy had been relocated to Beirut, and the ministry had recommended that all nationals stay away from Syria since 2011.

“We continue to follow events in Syria. Above all, we are trying to establish the facts about the deaths of Azerbaijani citizens. If it is confirmed, we try to discover how they got to Syria, and at whose expense,” he told the APA news agency. “Given that there is no diplomatic mission left in Syria, you can see how hard it is to investigate. But we are doing all we can.”

Arastun Orujlu, head of the East-West research centre in Baku, told IWPR that once militants started seeping back into Azerbaijan, they could create significant problems.

“The young people in these armed groups are very professionally trained by agents from foreign countries. They are used for specific duties. When they come back to Azerbaijan, it isn’t not going to be an ordinary homecoming,” Orujlu said. “I think that if they come back, they will arrive with specific aims, which I very much doubt will be peaceful. We need to think about this now so as not to have to pay the price later.”

Ilham Ismayil, a former officer in Azerbaijan’s secret service, the National Security Ministry, sees the Sunni jihadi fighters as a direct threat to the country, as they might seek to create an Islamic state.

“From time to time, these people, these radical Islamists, have attempted to stage terrorist acts and have carried out small incidents in Azerbaijan,” he said. “Azerbaijani nationals used to cross through Turkey into Syria as individuals, on their own initiative. But now this process is being controlled by particular individuals, and it’s organised,” he told IWPR. “We need to do serious public education work. If need be, we will have to employ the methods used to combat illegal armed groups.”

Sabuhi Mammadli is a journalist with the lent.az news site in Azerbaijan.