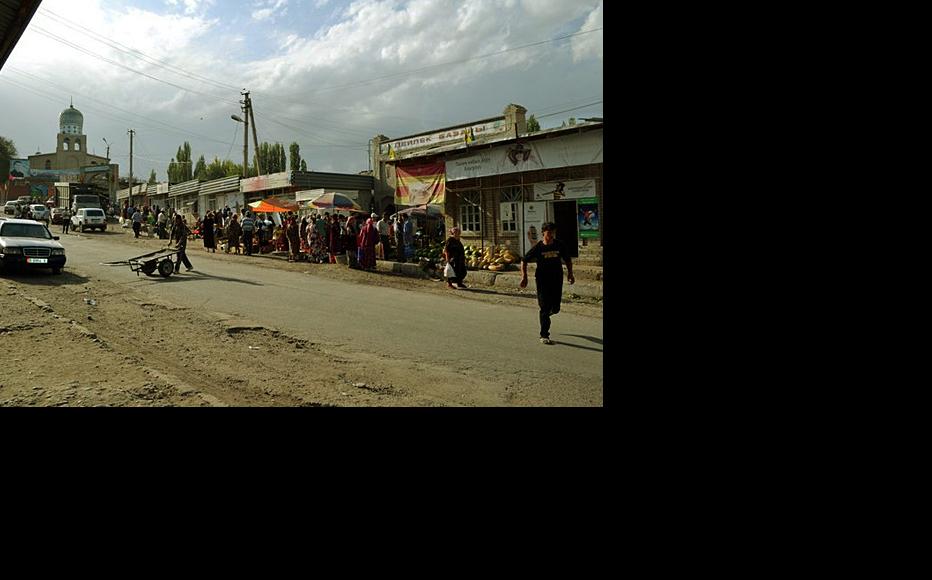 A handful of young men have left Batken province in southern Kyrgyzstan in the hope of joining the Syrian rebels. This is Isfana, in the same province. (Photo: Nataev/Wikimedia)
The link has been copied

A small number of young men from the Central Asian states of Kyrgyzstan and Tajikistan have gone off to fight on the side of rebel forces in Syria.

The head of Tajikistan’s national security agency, Emom Melikov, announced on May 23 that three nationals of the country had been killed while fighting for the Syrian rebels.

Melikov did not say how the men ended up in Syria, but spoke in general about the danger of young people being radicalised at Islamic schools abroad. There are believed to be 1,000 Tajik nationals studying in Afghanistan, Iran and Pakistan.

“I don’t think they go there to become terrorists, but once they are there, they are easily entrapped by terrorist groups,” he said. “There’s a lot of temptation – they get paid a great deal of money.”

Nozirjon Buriev, spokesman for the Tajik security agency, told IWPR he had no specific information on nationals of the country involved in the Syrian conflict, but he too claimed they were paid for fighting.

“It’s like a chain reaction – if one person leaves [from a particular place], others will follow. The main reason is financial, as they are offered good money,” he said.

In recent months, a group of young men from the town of Kyzyl-Kia in Kyrgyzstan’s southern Batken region have left for Turkey, in the hope of crossing into Syria to join the fight.

“Police say 14 or 15 young men have left home to join the jihad in Syria, via Turkey,” the leading Muslim cleric in Kyzyl-Kia, Mukaddas Ajy Kojoniazov, told IWPR. “They lied to their wives and parents, saying they were going to Russia.”

Kojoniazov said he knew the men because they used to attend his mosque regularly, but he said it was impossible that they were recruited there.

“There was never any talk about Syria or jihad at the mosque. They did this themselves either through the internet or from other people, and made the decision to go. They visit various religious websites on the internet, ‘wrong’ websites… in Russian and Kyrgyz,” he said.

Kojoniazov argued that Islamist rebels in Syria could not be described as waging a jihad, since those on the government side were Muslims as well.

The alarm was raised when one of the men called home and his parents informed the local authorities.

Two of the group, 35-year-old Almaz Jalalov and 29-year-old Atabek Tashbaltaev, came home in May, according to Kyrgyzstan’s national security agency.

In a statement, the agency said the men’s safe return was secured by their parents and members of parliament. One parliamentarian, Omurbek Sabirov, accompanied some of the parents on a trip to Istanbul.

IWPR contacted the Kyrgyz security agency for an interview on this case, but it had not responded by the time this article was published.

Ernist Nurmatov, an RFE/RL reporter who visited Kyzyl-Kia, said he understood 17 men had gone in total. He told IWPR that they staggered their departure over March and April, but seem to have coordinated their plans.

Nurmatov said he also checked out a report that a similar group from the neighbouring Osh region had been recruited for the Syrian conflict, but found no confirmation that this was true.

Residents of Kyzyl-Kiya were shocked at the news, as the young men involved did not fit the perceived profile – they were settled in married life rather than rootles youngsters; they were reasonably well-off, not unemployed; and they had no known connections to Islamic extremist groups.

The local member of parliament from Kyzyl-Kia, Mukhtar Mirkadyrov, told IWPR he was personally acquainted with one of the men who returned, and also with another man who was still in Turkey. Both, he said, were practicing Muslims but not overtly devout.

“As far as I know, many of them are from well-off families,” he said.

According to Mirkadyrov, the group, which included men of Kyrgyz, Uzbek and Tajik ethnicity, seemed to have been recruited by a friend living in Russia, who used the internet to send them information about events in Syria.

“The guy was sending them things saying, ‘we’re sitting here, we have it good, but it’s the afterlife that counts. In Syria, they are killing our brothers and here we are, sitting quietly,’” he said.

Mirkadyrov said the volunteers funded their own travel, and were seen by some as local heroes.

“Here in Kyzyl-Kia, the more religious guys – those who grow long beards – say they admire these men who were able to go there. They would have liked to have done the same, if they had the financial means,” he added.

Kadyr Malikov, an expert on religious affairs, said the group was clearly motivated by idealism, not money.

“They didn’t go because of money. They weren’t promised anything; they had a clear goal,” he said.

Malikov said that while this was an isolated case, more generally there were signs that more and more young people in Kyrgyzstan were being drawn towards radical forms of Islam.

Malikov suspects the rise in radicalisation has been influenced in part by the increase in material posted on the web by supporters of the Syrian rebels, especially since they started losing ground to government forces earlier this year.

“There are a lot of videos and appeals for volunteers on the internet, in Russian, Turkish, Arabic and English, , with no indication of who posted them,” he said.

Malikov the reasons for radicalisation included a lack of leadership from local leaders, a sense of alienation, disillusionment with the government, and feelings of solidarity with other Muslims.

“When young people have already been introduced to radical ideas, all this leads to the creation of a certain image of ‘the enemy’ and makes them highly susceptible to various forms of recruitment,” he said.