Resentment of their presence is deeply connected with historical memories of occupation.

Resentment of their presence is deeply connected with historical memories of occupation. 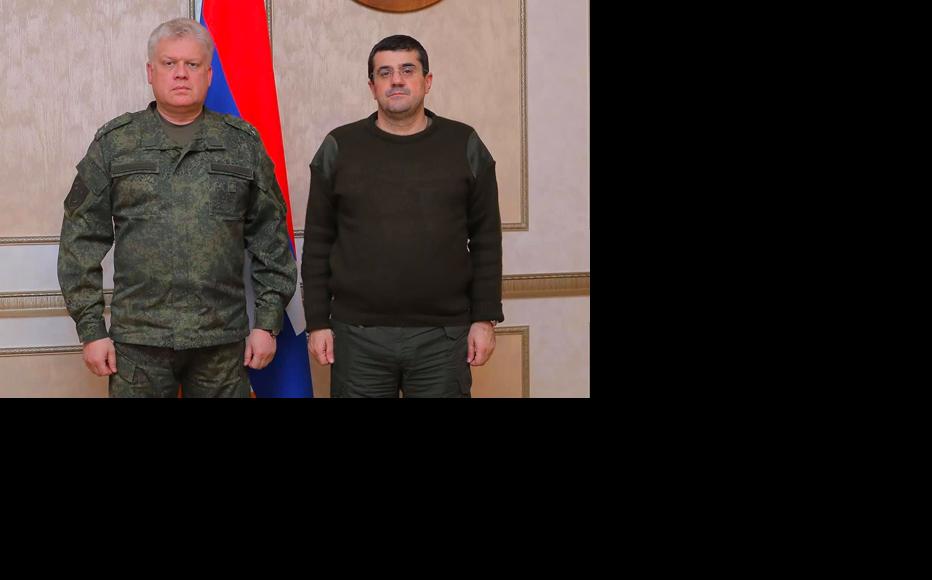 The Deputy Commander of Russia’s peacekeeping forces, Dmitry Shuvarkin’s meeting with Araik Harutunyan, president of the unrecognised Republic of Nagorno-Karabakh. (Photo: Arayik Harutyunyan/Facebook)
The link has been copied

The deployment of Russian peacekeepers in Nagorny Karabakh as part of the November 10 ceasefire agreement has caused disquiet among many Azerbaijanis who fear it may impact on their own sovereignty.

According to the document's provisions, nearly 2,000 Russian forces will provide security in Karabakh territories remaining under Armenian control and in the Lachin corridor that connects Armenia with Stepanakert.

Opposition figures and civil society activists have expressed fears that the Russian deployment amounted to an occupation, with some warning that Russia could eventually hand territories over to Armenia. Many are worried that the peacekeeping forces will go beyond their current five-year mandate to ensure that Karabakh stays under Russian control in the long term.

Ali Karimli, head of the Azerbaijan Popular Front Party (APFP), denounced the presence of Russian forces in a video address right after the signing of the ceasefire agreement that ended the 44-day war.

“After 27 years Russian military forces are again returning to Azerbaijan. It is bad,” he said, in a reference to the removal of their military forces from Azerbaijan in 1992. This is commonly considered one of Azerbaijan’s most significant foreign policy achievements since independence in 1991.

Azerbaijani resentment of the presence of Russian military forces on its territory is deeply connected with the memory of occupation.

This specifically relates to the Bolshevik occupation of the Azerbaijani Democratic Republic in 1920 as well as the deployment of Soviet forces to thwart independence in Baku in 1990, in which 147 people were killed.

Many in Azerbaijan also recall Russia’s backing of Armenia during the first Karabakh war. The 366th CIS regiment, dominated by Russian military personnel, provided direct support to Armenian forces which resulted in the 1992 Khojaly massacre in which hundreds of ethnic Azeri civilians were killed.

Azerbaijanis have long questioned Russia’s interests in resolving the Karabakh conflict, viewing it as a way Moscow can maintain its geopolitical leverage in the region. They are also highly sensitive to any move that can be interested as accepting the Armenian narrative.

For instance, there was widespread fury on social media after a picture was released of a meeting between Dmitry Shuvarkin, the deputy commander of Russia’s peacekeeping forces, and Araik Harutunyan, president of the de facto republic. Many Azerbaijanis felt that this meeting legitimised Harutunyan’s position and were incensed that the flag and coat of arms of the unrecognised territory were visible in the meeting.

Journalist Jahangir Youssif said that, despite any promises Moscow might make, the very presence of Russian military personnel also created fears that Azeri sovereignty might be endangered.

“Although the Russian president publicly said that the region is the sovereign territory of Azerbaijan, in the long term, there are uncertainties about how the presence of Russia will affect the negotiations over the status of Nagorny Karabakh,” Youssif said.

Given these powerful historical memories, some ordinary Azeris feel that the very presence of Russian troops created a sense that conflict will break out again.

“My fear is that with the presence of Russian peacekeeping forces a new war might start,” said Aysel Shikhlinskaya, a 26-year-old graphic designer living in Baku. “Azerbaijan’s dependence on Russia and Russia’s influence over Azerbaijan will increase.”

Many in Azerbaijan hope that their staunch ally Turkey will send its own peacekeeping forces as a counterbalance to the Russain troops.

Isa Gambar, former chairman of the opposition Musavat party, stated in a TV interview that Ankara should not have been excluded from the ceasefire agreement and expressed hopes that Turkey would actively engage in the issue in the future.

Anar Mammadli, chairman of the Election Monitoring and Democracy Studies Center, said that all the uncertainty was fuelling greater fear within Azerbaijan and called for the agreement to be revised.

“The mandate and mission of the Russian peacekeeping forces is not clear,” he said. “There are no provisions regarding this in the ceasefire agreement. There is a need for a new document in order to clarify this issue.”

Giving Voice, Driving Change - from the Borderland to the Steppes
Azerbaijan, Karabakh
Army, Conflict
Connect with us