Armenians living in the Lachin corridor, which will soon be handed over, refuse to leave. 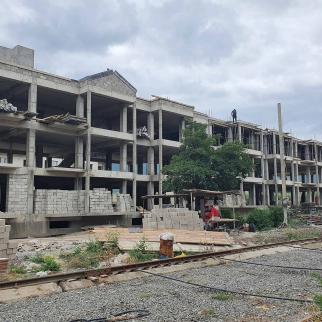 A microdistrict with more than 10 three-story buildings is being built in the village of Ivanyan, close to next to the base of Russian peacekeepers. Construction is ongoing to house thousands who have been displaced from the territories that Azerbaijan's armed forces regained control of as a result of the 2020 war. © Arshaluis Mghdesyan

Armenians living in the Lachin corridor, which will soon be handed over, refuse to leave. 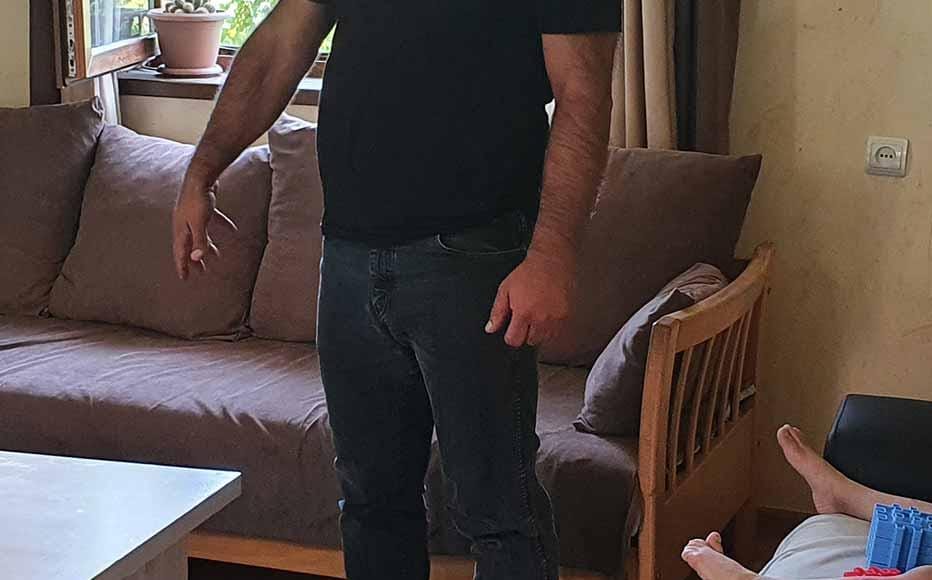 Andranik Chvushyan with his children in the family home in Aghavno. The 41-year-old jeweller moved with this family from Lebanon to the village in Nagorny Karabakh in 2017. They are among the residents of the Lachin corridor who are to leave their homes by August 25 as the Azerbaijani forces will regain control of the area. © Arshaluis Mghdesyan 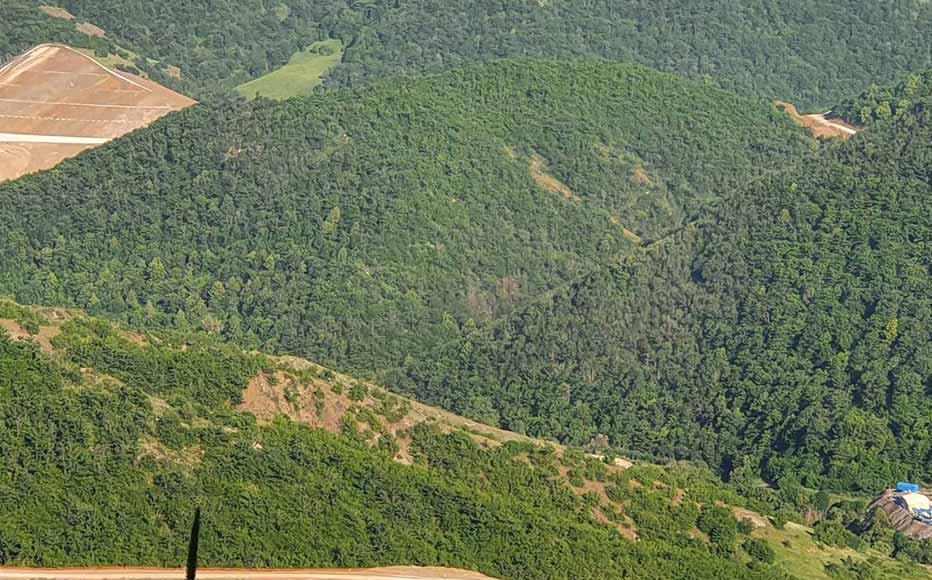 A section of the new road being built in Nagorny Karabakh by the Azerbaijai government. In July Baku announced that it had completed its 32-kilometre part and demanded Yerevan arrange a transport link between Armenia and Stepanakert bypassing the town of Lachin, which Armenians call Berdzor. © Arshaluis Mghdesyan 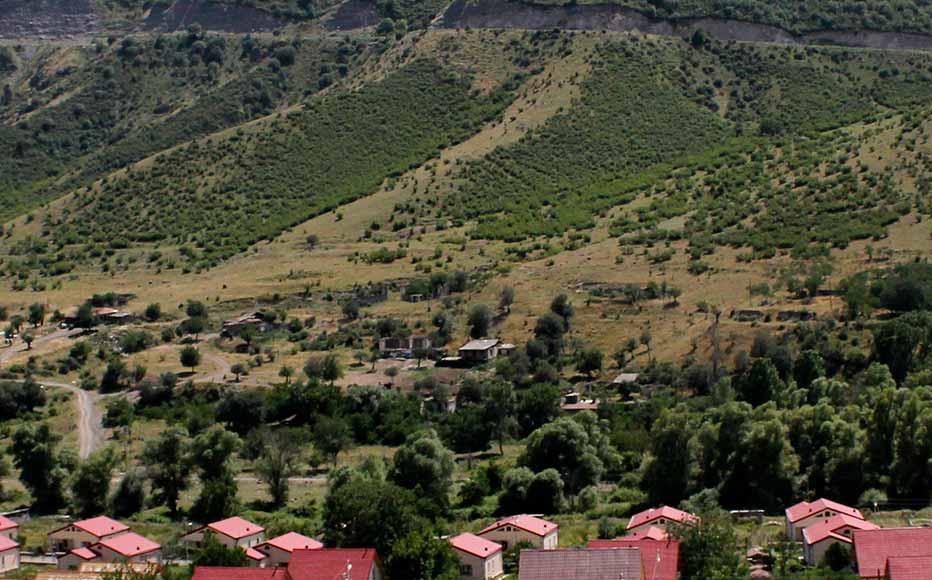 A view of Aghavno, the first settlement travellers encounter on the way from Armenia to Nagorny Karabakh. Built in 2014 with the financial support of the Armenian diaspora, the village has lost most of its residents after the 2020 war: of the 270 inhabitants of 2019, a mere 40 still remain. © Arshaluis Mghdesyan 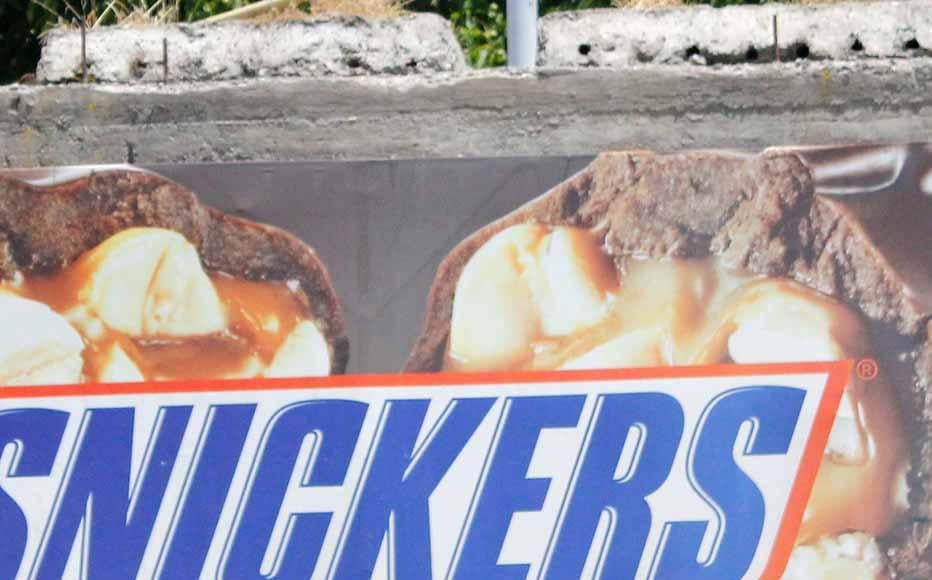 A flag with the Soviet Union's hammer and sickle was placed over a Snickers' billboard in the center of Berdzor, the Armenian name of Lachin. Berdzor is one of the three villages Armenians will have to leave by August 25. © Arshaluis Mghdesyan
The link has been copied

Andranik Chvushyan does not want to abandon his home. The former jeweller, his wife Kristine and their five children left Lebanon in 2017 to settle in Aghavno, a village inside the Lachin corridor that connects Nagorny Karabakh to Armenia through Azerbaijan. When asked why he decided to relocate, he just turns towards the houses spreading along the left bank of the homonym river.

“Fierce battles were fought to open this humanitarian corridor during the first Karabakh war [in the 1990s],” the 41-year-old told IWPR, looking at the spectacular natural fortress of mountains surrounding the village. “How can anyone agree to ceding this land to Azerbaijan?”

The corridor has been Karabakh’s lifeline since Azerbaijan lost control of the region in 1994. About ten kilometres long in a straight line, the serpentine strip unfolds for 25 km and is five km wide.

Chvushyan, who has acted as the village administrator since 2019, is among those who will have to leave the area by August 25 when the Azerbaijani forces regain control of the area for the first time in 30 years. The corridor is currently under the supervision of Russian peacekeepers deployed to the region in the wake of the war between Armenia and Azerbaijan for the control of the Karabakh.

Aghavno is small but highly symbolic. It is the region’s gateway, the first settlement travellers encounter coming from Armenia and it is a strategic hub connecting infrastructures of Armenia’s Syunik region.

The village was built in 2014 on the area of Zabukh, an Azerbaijani settlement destroyed in 1992 during the first Karabakh war. The Armenian diaspora financed the construction of a new, model village: a carpet of red roof tops and white houses surrounded by abundant vegetation. The 2020 war ended the dream: of the 270 inhabitants of 2019, a mere 40 still remain.

The 2020 war, which killed more than 6,500 people in around six weeks, saw Azerbaijan win back swathes of territory that had been controlled by Armenians since 1994. Russia deployed about 2,000 peacekeepers to the region after brokering a ceasefire on November 10, 2020.

According to the accord, the entire Lachin district was to be handed over to Azerbaijan on December 1, 2020, apart from the five-kilometre buffer along the road where Russian patrols would allow Armenians to travel safely between the region and Armenia.

Aghavno, Sus and Berdzor, as Armenians call the district’s administrative centre Lachin, remained under the control of Stepanakert, Karabakh’s de facto capital. The deal also foresaw the construction of an alternative road by 2023.

In July 2022, Baku announced that it had completed its 32-kilometre section and demanded Yerevan arrange a transport link between Armenia and Stepanakert bypassing Berdzor. President Ilham Aliyev confirmed completion on August 5.

The new road bypasses Shushi, the region’s cultural capital with deep symbolic significance for both Armenians and Azerbaijanis, who call it Shusha. It is also designed to avoid the two communities crossing paths, apart from a large overpass with one lane designated for Armenian cars and another for Azerbaijani.

Yerevan labelled Baku’s demand illegitimate, stating that Azerbaijan went ahead with construction without coordinating the route with either Armenia and Russia.

Since then, the situation has sharply escalated. On August 3, two Armenian servicemen and one Azerbaijani died in renewed violence. Skirmishes and ceasefire violations have been regular since 2020, putting into question the role of the Russian peacekeepers who are the principal guarantor of security.

Residents cling on to hope that Aghavno can remain Armenian.

“No one, neither Prime Minister Nikol Pashinyan, nor the President of Karabakh Arayik Harutyunyan should decide the fate of this land,” Chvushyan told IWPR. “This is a national matter. Our children, soldiers died for these lands, but now we are told that we have to cede them.”

On August 8, Suren Petrosyan, leader of Armenia’s Democratic Consolidation Party, moved to the village with his wife and young child. He is one of the volunteers who have relocated to organise self-defence and retain control of the corridor. He urged others to follow his example in a post on the party’s Facebook page, which has gathered over 267,000 views.

In March, Arusyak Mkrtchyan moved to Karabakh with other volunteers from the Mshakutamet Civic Initiative, which carries out cultural activities in border villages. They were driven by the belief that only education and culture can defeat the war. Arusyak works in the village school, which was renovated in May 2021.

“There are many available houses, many people want to move here, to this beautiful village with red roofs, but the Karabakh authorities oppose it,” the 24-year-old music teacher told IWPR.

Sus and Berdzor are also empty shells. Some grocery shops remain in the centre, but their customers are largely Russian peacekeepers.

Since the beginning of 2022, the number of registered Azerbaijani convoys travelling on the Lachin corridor has increased.

“There were days in June when there were ten or 11 convoys a day. They headed to the areas where the alternative road was being built,” said Olesya Vartanyan, an analyst at the International Crisis Group, adding that they mostly moved workers to the construction site.

Some who remain in the villages cannot accept abandoning them, while others refuse to leave complaining that the resettlement programme is insufficient, if not insulting.

The compensation is considered too low to purchase any property in Armenia, according residents who also say it that a ten-year sale ban of properties they could eventually purchase is unacceptable.

Armenia has been supplying Karabakh’s energy, electricity and Internet through the Lachin corridor for 30 years.

“The new road includes communications, electric lines and internet cable,” said Hayk Khanumyan, Karabakh’s minister of territorial administration, adding that local officials were also involved in the negotiations about the route. For Karabakh’s de facto authorities the supply from Armenia remains critical as purchasing resources from Azerbaijan would mean the end of the independence of the unrecognised republic.

Gas is another problematic issue.  Gazprom Armenia, a full subsidiary of the Russian energy giant, supplies gas to the region but Karabakh partially depends on Baku as well, since the pipeline crosses territories now controlled by Azerbaijan. In early March, Karabakh was left with no gas supply for two weeks: Armenian authorities claimed that Baku first damaged the pipeline and later installed a valve on it. Baku denied all accusations.

A relocation of the gas pipeline is also planned but there is no timeline due to the substantial investments it requires. Negotiations are ongoing for the numerous private hydropower plants in the district that Karabakhi Armenians own.

While the Armenian section is yet to be completed, construction is progressing, authorities claim.

“The section crossing the settlements of Hin Shen, Mets Shen, Kanach Tala in Karabakh and leading to the Armenian border is completed. The 11-kilometer long part from the Armenian border to the village of Korni Dzor, is not yet ready,” Khanumyanthe said in a recent TV interview.

On August 1, Armenia began repairing the Korni Dzor-Tekh section of the M12 highway, which should presumably join the new route of the Lachin corridor.

“After the closure of the existing road [through Lachin], a three-four kilometres section of a dirt road passing from the border with Armenia will be used as a temporary solution until the Armenia section of the new route is completed,” Khanumyan said.

As the fate of the last Armenian village in the Lachin region remains uncertain, ombudsman Gegham Stepanyan said that the authorities have back-up plans.

“The assistance programme to IDPs [internally displaced persons] will apply to residents of Berdzor,” he told IWPR. “Perhaps they will be provided with apartments in Armenia. At the moment, many questions remain.