Since one in ten of the population uses the popular networking site, old-fashioned restrictions may not work any more.

Since one in ten of the population uses the popular networking site, old-fashioned restrictions may not work any more. 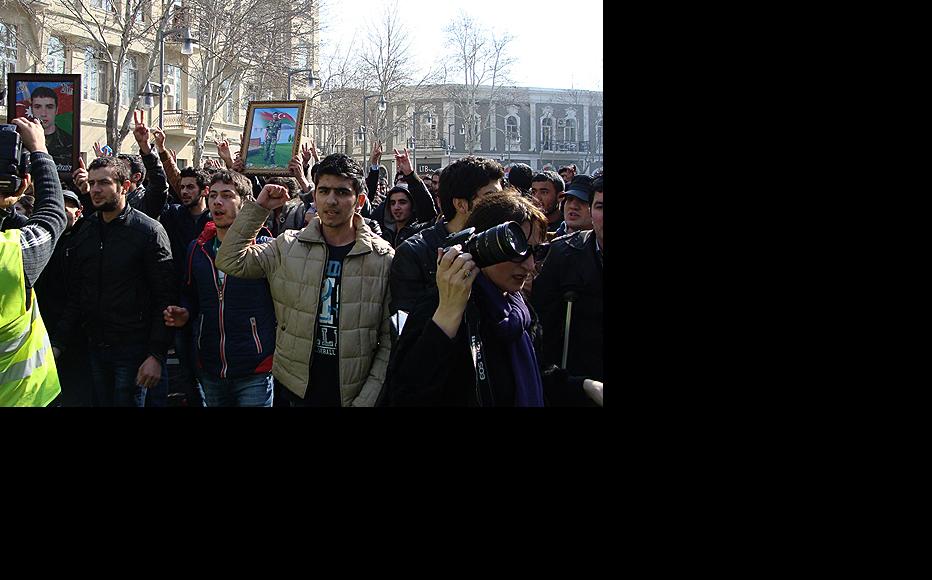 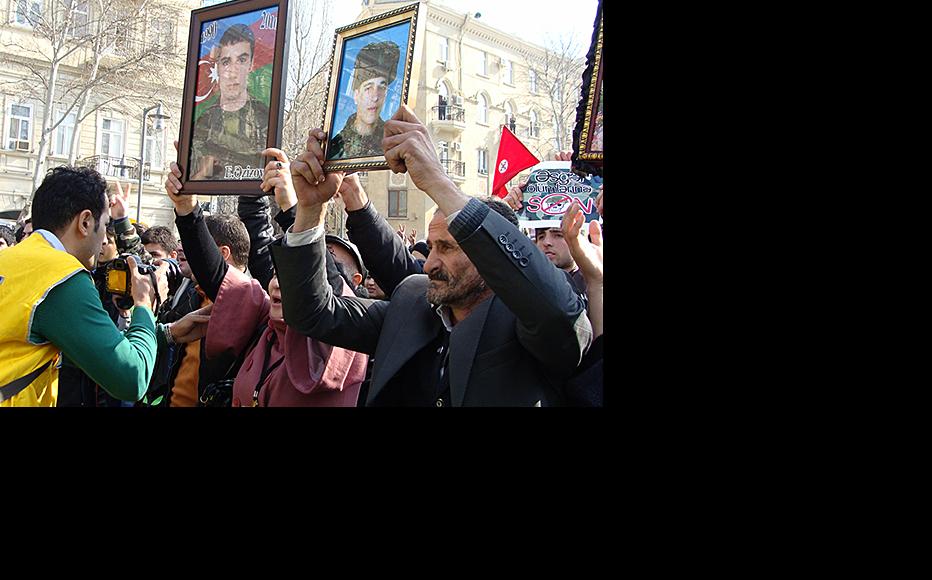 Protesters were angry about the frequent deaths of young conscripts. (Photo: Aliya Haqverdi)
The link has been copied

The social networking site Facebook is booming in Azerbaijan, where more than a million people now use the site. They include a new generation of opposition activists who are seen as a challenge by officials accustomed to controlling the media.

Some officials have proposed restricting use of the site, but experts say Facebook is almost impossible to regulate unless it is closed down altogether, and it may already be too deeply embedded in Azerbaijan to be removed.

Facebook’s mobilising power was seen in January, when the first demonstration organised exclusively online took place. The protest followed the death of Jeyhun Gubadov, an 18-year-old conscript soldier who died just three months into his military service. His mother was officially told that he died of heart failure, but pictures of his body taken by family members showed clear signs of injury. The images spread online, together with pictures of other soldiers who died in non-combat situations, and videos of their grieving parents, causing widespread anger. (See Azeri Anger Roused by Soldier's Death.)

A Facebook page called “Stop Soldier Deaths” called for a protest on January 12, and within days more than 17,000 people had clicked to say they would attend. Although the actual protest was not that large – journalists estimated that 3,000 people came – Professor Katy Pearce of the University of Washington said that in a society like Azerbaijan’s, clicking “attending” on a protest event was a significant step in itself.

“In today’s social media world, where your ‘attendance’ is visible to the public and the government, this sign of support is meaningful,” she said.

It was in any case a large protest by Azerbaijani standards. In spring 2012, the opposition Popular Front and Musavat parties called for protests on the eve of the Eurovision Song Contest. Although this was announced on Facebook, it did not gain much traction on social media sites, and was mainly coordinated through the opposition press. Around 1,000 people attended the first demonstration, with subsequent protests far smaller – some were attended by just a few dozen people.

When fines were imposed on 22 participants in the January 12 demonstration, social networking sites again showed their power with the “five qepik” campaign, in which sympathisers paid a tiny amount each towards the penalties, which ranged between 300 and 600 manats, or 380-765 US dollars.

Nermin Rehimli, one of the organisers of the campaign, the sum of 10,500 manats needed to cover all the fines was collected within five days.

“The amount of money raised in such a short period of time and the demonstration of support by a wide variety of Azerbaijanis was significant,” Pearce said. “More than 2,000 people donated during the campaign, the majority of them Facebook and Twitter users. The purpose of the campaign was to continue the solidarity demonstrated at the January 12 protest action over conscript deaths.”

In what looked like a response to the “five qepik” campaign, the government amended the civil offence code in early February to stipulate fines of 250 to 500 manats for anyone who donates money to political parties, civil society groups and international non-governmental organisations. The fines are higher for state employees, and there are separate penalties for organisations that accept the money.

The government used evidence gathered from Facebook to justify the arrest of three members of the new opposition youth group NIDA – Bakhtiyar Guliyev, Shahin Novruzlu and Mahammad Azizov – on charges of planning violent protests. Their arrests on March 7 came just three days before another Facebook-organised protest was due.

The national security ministry and the prosecutor’s office issued a statement accusing the three suspects of using Facebook to call for violent action and discussing plans to use smoke grenades and petrol bombs. Nevertheless, protesters were undeterred and hundreds gathered in Fountain Square in central Baku on March 10 for another demonstration against conscript deaths.

Osman Gunduz, head of the Azerbaijan İnternet forum, a Baku-based NGO researching social media in Azerbaijan, the rising number of Facebook users has made it easier to mobilise more people for events of this kind.

According to the web statistics site socialbakers.com, Azerbaijan had 1,013,000 Facebook users in Azerbaijan in February, over 12 per cent of the entire population, but heavily concentrated in the capital. The total reflected an increase of 100,000-plus in the space of two weeks.

The popularity of Facebook gives anti-government activists access to the kind of audience that the opposition newspapers Azadliq and Yeni Musavat, with a circulation of just 10,000, could never reach. Internet forums, of which www.disput.az was the most important, preceded Facebook, but they too had limited reach.

“The increased number of users affects their activity,” Gunduz said. “Facebook becomes a catalyst. Communication gets much more effective. Facebook already has a significant role in shaping public opinion in Azerbaijan.”

The authorities seem alarmed at the emergence of Facebook as a tool for activism.

National Security Minister Eldar Mahmudov has said telecoms companies should help monitor social networking sites, as they are being used to recruit extremists. And Ramiz Mehdiyev, head of the presidential administration, has alleged that certain international organisations are paying and organising young people via social networking sites.

“The views of those who make provocative calls on Facebook about various events do not coincide with the views of the majority,” Mehdiyev told the state news agency Azertag. “Those calls on social networks are the emotions of young people supported and incited by the treacherous radical opposition.”

Immediately after the March 10 protest and the arrest of the three NIDA activists, Fazail Aghamali, a parliamentarian from the government-aligned Ana Vatan party, said officials should examine whether social networking sites were a threat to national security.

“I have observed serious aggression at the latest Facebook-organised protests about conscript deaths,” he told IWPR. “Facebook puts them onto the streets, but it cannot bring them back.”

Pearce said that to date, the Azerbaijani government did not seem to have a firm policy on how to deal with the challenges that Facebook might pose to it.

Noting that the government uses social media to promote itself as well, she said, “That alone is a good indication that Facebook will not be closed. Additionally, it is fairly difficult to restrict Facebook. It is, more or less, an all-or-nothing site.”

However, she added that as with the recent arrests of NIDA members, “information disclosed on Facebook or any internet site – regardless of privacy settings – can be used against people offline. Content monitoring and deep packet inspection [intense monitoring of web traffic] is not impossible.”

Gunduz said the government should wake up to the fact that Facebook was just a medium.

“Facebook is a circumstance, not a reason for action. If there is a problem, there must be groups and opinions that form around it and who take the issue to Facebook. The focus should be on solving the problems, not limiting Facebook,” he said.