Once seen as an instrument of Turkish soft power, the educational programme has fallen foul of a battle between Prime Minister Erdoğan and influential preacher Fethullah Gülen.

Once seen as an instrument of Turkish soft power, the educational programme has fallen foul of a battle between Prime Minister Erdoğan and influential preacher Fethullah Gülen. 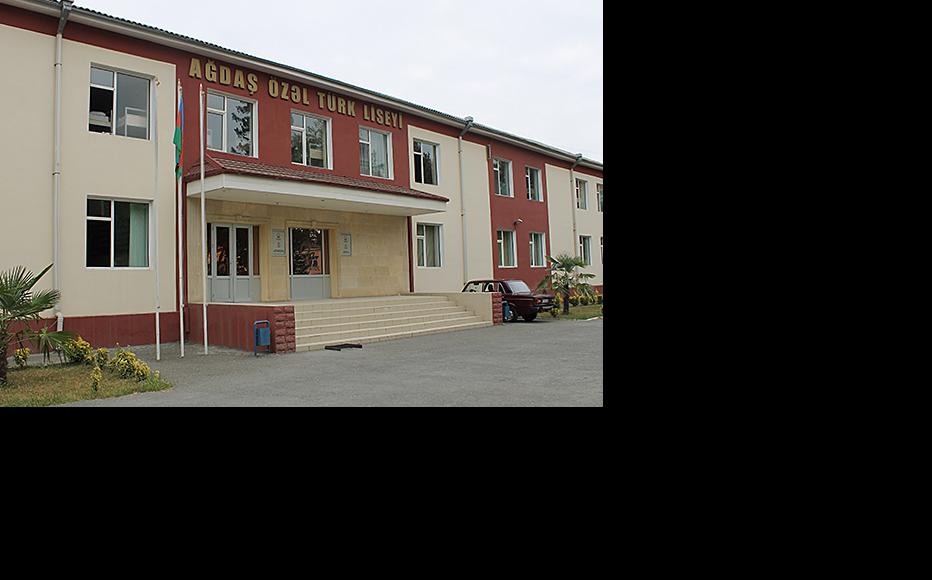 One of the Turkish-curriculum schools that has been shut down in Azerbaijan. (Photo: Agdash Lycee’s website)
The link has been copied

Turkish prime minister Recep Tayyip Erdoğan has scored a success in his war against exiled Islamic thinker Fethullah Gülen by getting close ally Azerbaijan to shut down schools run by his foe’s Hizmet movement.

Gülen’s movement runs over 2,000 educational establishments around the world, including 11 high schools, 14 primary schools and the Qafqaz University in Azerbaijan. All the schools have now been closed.

Graduates of the Hizmet-run schools say they offered a good education which will be hard to replicate in Azerbaijan.

When Gülen’s movement moved into the new Turkic states of the post-Soviet Azerbaijan in the 1990s, its educational programme was actively encouraged as a useful arm of Turkish foreign policy.

In earlier years, Erdoğan’s AKP party with its openly Islamic agenda found Gülen a natural ally. But the two forces fell out badly, with Erdoğan going after what he saw as a fifth column pervading the institutions of state. A corruption investigation targeting government figures last December was, the prime minister claimed, a plot by the Hizmet movement.

The Turkish leadership has been doing what it can to close down Hizmet’s influence and educational networks in other countries. As a close ally, Azerbaijan has been cooperative. In February, there was talk of a “parallel structure” of Gülen sympathizers within the Azerbaijani government, as well. (See Senior Azeri Official Sacked in Spillover From Turkish Internal Strife on the row.)

When Erdoğan visited Azerbaijan in early April, local media reported that the Hizmet movement and its schools topped the agenda of his talks with President Ilham Aliyev. The latter assured him that “we won't allow anything to damage our relationship”.

Farhad Mehdiyev, a political analyst and professor at Qafqaz University, said Ankara had made no secret of its desire to see the schools shut down.

“Erdoğan has been demanding the closure of the schools for a while. He did so openly during his visit to Baku,” Mehdiyev said.

Technically, the 25 schools were closed not by the government but by the state oil company SOCAR, which since March 2013 has controlled them under its international education programme.

At the time, SOCAR’s vice-president Khaliq Mammadov said the arrangement would make the schools more commercially viable, since their high fees put them out of reach for most Azerbaijanis. But announcing the closures on June 18, SOCAR’s education programme said the schools had proved hard to manage and were a financial burden.

“We think it best that SOCAR does not involve itself this area. Oilmen should deal with extraction and the education ministry with education,” SOCAR President Rovnaq Abdullayev said, according to APA news agency.

On June 19, Azerbaijan’s education ministry said there was no “no need or cause for concern”, and pledged to accommodate both pupils and teachers within the state school system.

Whether they will get the same quality of education remains in question. The government body that deals with student admissions acknowledges that exam results at the Hizmet school students are between 20 and 40 per cent better than those achieved by state schools.

Elkhan Bashirov, who graduated from a Hizmet school in Mingechevir in 2011 and now works for BP, told IWPR he was shocked by the decision, and insisted the schools had been doing excellent work for 20 years.

“It’s certainly going to have a negative impact on Azerbaijan’s education system,” he said.

The schools are not universally popular in Azerbaijan. Most people cannot afford to pay the fees, so it is mainly the children of businessmen and top officials who go there. That raises suspicions that the schools are indoctrinating a new elite with Gülen’s teachings. Interviewed earlier this yearm Nermin Rehimli, a graduate of Qafqaz University and co-founder of the Positive Changes youth organisation, dismissed such fears as “nonsense”.

Critics of Hizmet’s educational programmes do not deny that they achieve excellent academic results, but question what else they are teaching.

In a Facebook post, Rustam Qarakhanli, a political analyst who writes for the ruling party’s newspaper, wrote of his concerns about a group that he said “is of course not a radical Islamic movement like Wahhabism, for example, but has very powerful political leverage”.

“From the standpoint of state sovereignty, you can understand and justify closing these schools in Azerbaijan,” he wrote.

But there were dissenting voices even among pro-government politicians like Fazil Mustafa of the Boyuk Qurulus party.

“We don’t care whether these schools were brought to Azerbaijan by the English, the Americans, a religious movement, or some religious figure – we must evaluate them on their merits,” he said. “By closing the Turkish schools, tens of thousands of students will be left without a quality education.”

Lamiya Adilgizi is a freelance journalist from Azerbaijan currently based in Istanbul.

Azerbaijan, Turkey
Education
Connect with us