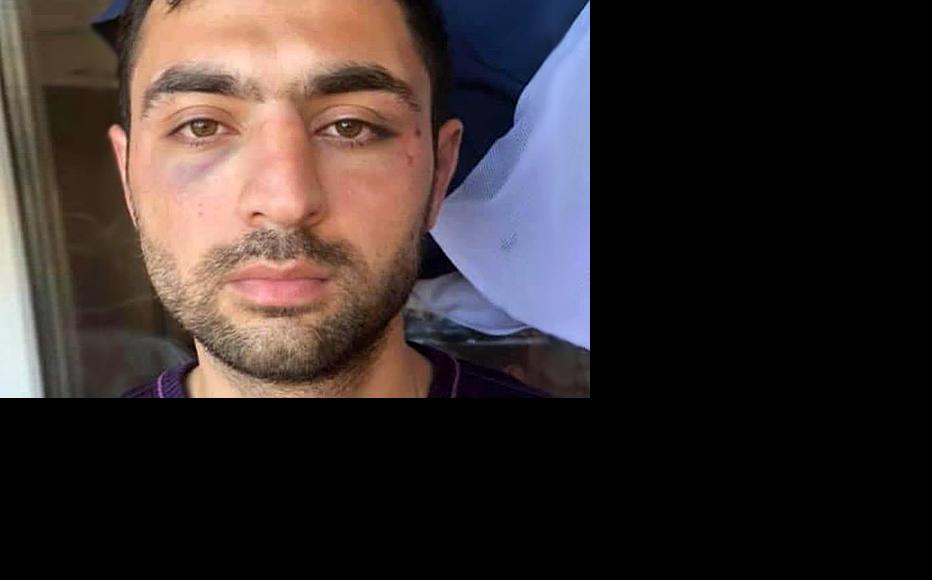 Karim Suleymanli, who was beaten and detained by the police. (Photo courtesy of K. Suleymanli)
The link has been copied

Civil society activists in Azerbaijan have accused the government of using the coronavirus quarantine as a means of facilitating and excusing police violence.

On June 7, footage emerged of police beating and forcibly detaining a citizen who was putting out the rubbish in front of his building in the Yasamal district of Baku. They claimed he was violating quarantine rules.

In the video, neighbours looking out at the scene started throwing rubbish at the police car to protest the violence.

The following day, the police themselves broadcast footage of a raid at the same address in whihc they dragged out 11 people, some only half-dressed.

Gular Suleymanova, a resident of the building, said that the police had not even allowed her son to put his clothes on.

“My son was taken out of  bed, beaten and not allowed to get dressed,” she said. “Although we said that there were children and they would be afraid, they didn't pay attention. They beat my son at the 29th police station, his eyes are black and there are signs of violence on his body.

“If someone violates the quarantine or protests, they need to explain their mistakes in words or punish them in some other way. Aren't these people criminals? Such violence does not fit into any law,” Suleymanova said, adding that she had filed a complaint against the police for their actions.

Javad Javadov, a lawyer providing the family with legal assistance, said that Article 25, paragraph four of the law on police prohibited officers from entering a house wthout a warrant.

“The entry of police into homes violates [citizens’] right to the inviolability of the home,” he continued. “Certain conditions must be observed when the police enter the apartment.”

The Yasamal operation was met with great outrage on social media, with many people using the hashtag End to Police Violence, and a number of activists and journalists launched petitions.

Investigative journalist Khadija Ismayil, along with several human rights activists, signed a letter of complaint to the prosecutor general’s office over the alleged police violence.

“We demand that legal action be taken so that violent police do not go unpunished,” she said. “We don't have high hopes, but we still want the new prosecutor general to do his job. If he does not, we will continue legal proceedings and complain about the inaction of the prosecutor’s office.”

Giyas Ibrahimov, who was detained in May 2016 after he and a friend wrote “Happy Slaves’ Day” in Azeri on a monument to ex-president Heydar Aliyev, hung a banner from his roof reading “Statue Prisoner” to protest the violence.

Police arrived shortly afterwards and arrested Ibrahimov, detaining him for several hours before fining him 50 manat (30 dollars) and releasing him.

“I was protesting against police brutality and they were ordered to detain me... and even after being detained, struck me,’’ Ibrahimov told IWPR.

Activist Bakhtiyar Hajiyev said that given that people in Azerbaijan were persecuted for the slightest ctiticism or infraction of the rules – and the lack of an avenue for legitimate, peaceful protest – the outcry came as no surprise.

“In many countries around the world, both government officials and law enforcement officers are attacked with eggs, tomatoes or rubbish bags when they take steps that anger citizens,” he said. “All this is happening in countries where the population has the freedom of peaceful assembly. In this case, officials think, ‘What mistakes have we made against a citizen that there is such a harsh reaction?’”

Political commentator Arastun Orujlu said that the government’s goal was to completely subjugate all protest, especially among the opposition.

“This pandemic period in Azerbaijan has been used for many political purposes,” he continued. “The authorities punished many dissenting, free-thinking people. There were those who were arrested and fined. For example, the police violence in Yasamal was a provocation. The police could detain the person who violated the quarantine rules and tell him to go home quietly.

The government is using this period to exert pressure by showing its power,” he continued. “They know that the population is exhausted and they are intimidated. There are only political motives in events in Azerbaijan - either intimidation or protest.”

Coronavirus Pandemic, Giving Voice, Driving Change - from the Borderland to the Steppes
Azerbaijan
Police, Coronavirus, Civil society
Connect with us