The ruling party is trying to change its image after a difficult few months.

The ruling party is trying to change its image after a difficult few months. 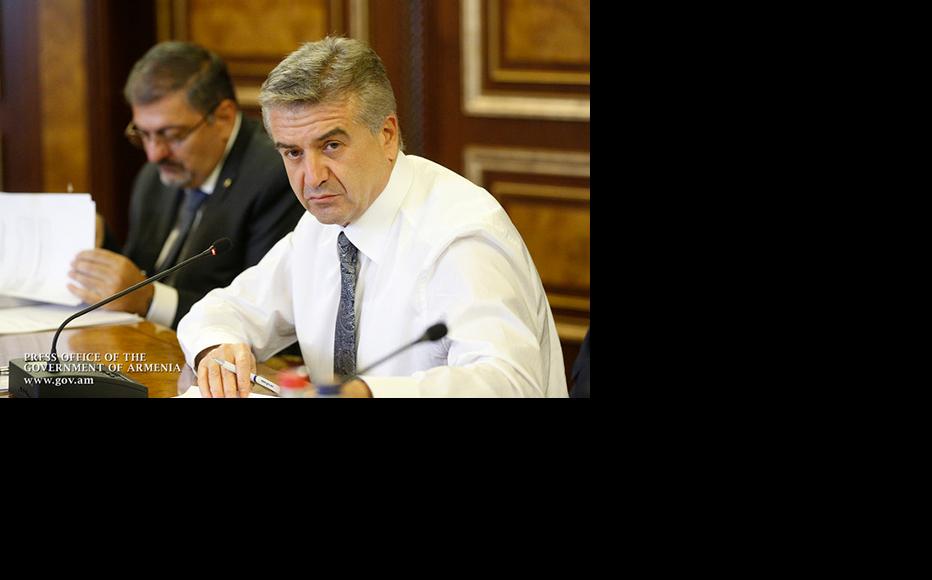 Armenia’s newly appointed prime minister Karen Karapetyan has been described as a “a symbol of change” by President Serzh Sargsyan.

The former Yerevan mayor’s appointment has been widely interpreted as an attempt to cast the ruling Republican Party in a new and more positive light ahead of parliamentary elections in April 2017.

The Armenian establishment was badly shaken by July’s two-week standoff with gunmen who had seized control of a police station in the capital.

A considerable part of the population supported the armed group, which had demanded the president´s resignation, leading to mass protests.

In the immediate aftermath, Sargsyan raised the idea of forming a government of national consensus, and the appointment of the premier appears to be the first step in that process.

On September 13, the president signed a decree appointing 53-year-old Karapetyan as Armenia´s 14th prime minister since the country gained independence 25 years ago.

Sargsyan praised the new head of government, who has spent the last five years as a senior executive with the Russian gas giant Gazprom, as a man of experience.

“We all know very well the capabilities and style of Karen Karapetyan.  He may indeed be on the crest of a great wave of change in Armenia, lead society to new economic and political freedoms, break stereotypes, give new flexibility to economic growth and so on,” Sargsyan said.

Next year’s polls will mark the country´s transition from a semi-presidential form of governance to a parliamentary republic.

But many people in Armenia are disenchanted with the country´s longstanding economic and social problems.

The economy is highly dependent on Russia, which in turn has been influenced by falling oil prices and European sanctions.  Russia´s economic downturn has hit Armenian exports and affected remittances from Armenian labour migrants.

The figures look grim. Armenia’s economy grew by 3 per cent in 2015 and the World Bank has predicted this will slow down to 2.2 to 2.5 per cent over the next years.

The poverty rate stood at 30 per cent in 2014, the World Bank reported earlier this year.

According to the Central Bank of Armenia, unemployment was 18 per cent in the first quarter of 2016.

Foreign direct investment fell from 497 million US dollars in 2012 to 181 million dollars in 2015, according to the United Nations Conference on Trade and Development (UNCTAD).

Moreover, Sargsyan has been under political pressure following the four-day war in early April between Azerbaijan and Armenian-backed military forces over Nagorny Karabakh.  The authorities were criticised for how they handled the flare-up and for making territorial concessions.

Experts believe that the ruling party has high expectations of Karapetyan, which he will have only a short time to meet.

“In the pre-election period, they have to bring the kind of figure who will create new hope,” Styopa Safaryan, founder and head of the Armenian Institute of International and Security Affairs (AIISA), told IWPR.

“The president did not say by chance that this person ´will be the symbol of change´, since Karen Karapetyan has experience getting positive results in a short period [of time].”

“Of course, this will lead to a new coalition, since it was obvious after the July incident that he [the president] has problems with the management,” he said.

According to Safaryan, Sargsyan has set Karapetyan both short and long-term tasks.  The first goal is to help present the ruling party as able to bring change now and in the future.

“At this stage, short-term results are important.  This [entails] at least raising the image of the ruling party, improving relations with Moscow, resolving questions related to Gazprom and Gazprom´s growing role in the Iran-Armenia cooperation on energy,” Safaryan said.

Safaryan recalled that when Karapetyan was elected Yerevan mayor, he successfully began reforms only to encounter obstacles and then resign unexpectedly for reasons that remain unclear.

“He was not part of the system or of a party and in this sense it will certainly be difficult to take drastic steps without support.  Today, I think, he at least has the support of the president and a stipulation on how deep he can go with the changes,” Safaryan said.

Alexander Iskandaryan, director of the Caucasus Institute in Yerevan, agreed that the authorities need to bring fresh faces into the government ahead of elections.

“Karen Karapetyan fits the mould, and he will select a government that will consist of people who have not been part of the political elite.  The point of this is to get this government to the parliamentary elections and beyond,” Iskandaryan told IWPR.

But whether Karapetyan´s team will succeed is hard to say, he added. The political elite is often seen as favouring its own business and family interests over the interest of the country.

“Belonging to the government lowers the rating of any person who joins it.  The problem is not the people, the problem is systemic.  Society, or at least a significant part, has rejected the political system of the country,” Iskandaryan said.

However, Karapetyan told parliament on September 14 that rapid changes would not happen straight away.

“There are steps we can take in the near future.  For the second phase, time is needed to determine in which direction we will lead the country… You have to understand that there is no magic wand.  If we want changes in the economy, we need to make structural changes.  Honestly speaking, the state of our economy is very grave,” Karapetyan told lawmakers.

Having instructed the state revenue committee to increase transparency, he called on the commission on regulation of public services, the ministry of energy and natural resources, the ministry of labour and social security to present proposals to revise the gas and electricity tariff policies.

Karapetyan has appointed the first six ministers of his new cabinet, four of whom have not held ministerial positions before.

On September 22, it was announced that the ministry of urban development will be scrapped and the ministries of economy, energy and natural resources and transport and communication will be renamed.