Parents are forced to shoulder a significant burden to ensure that their children receive proper schooling.

Parents are forced to shoulder a significant burden to ensure that their children receive proper schooling. 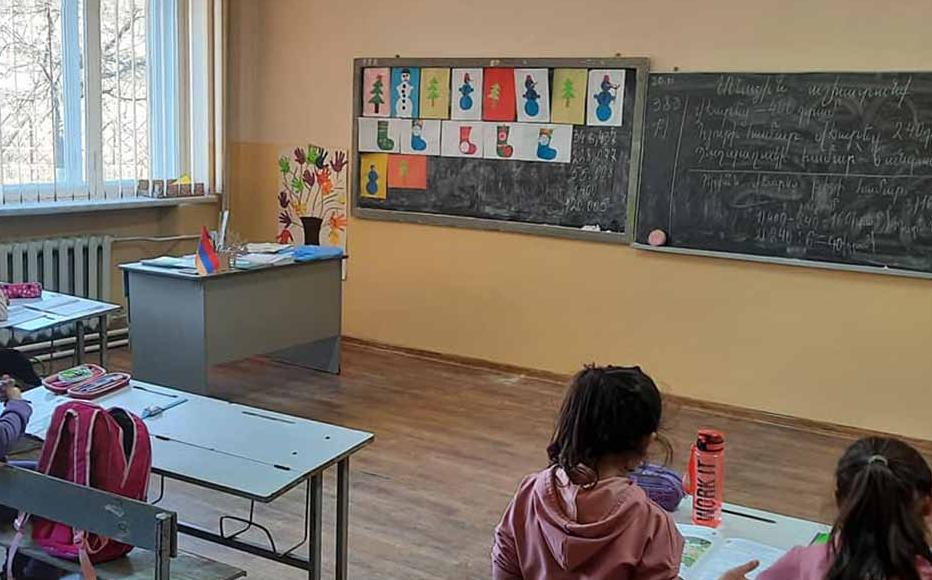 An elementary school in Armenia's Syunik province. Parents shoulder a significant burden to ensure that their children receive proper schooling, with some experts assessing that a third of the average Armenian household expenditure was on education-related costs. © Mania Israyelyan
The link has been copied

Mother-of-three Elena described her annual back-to-school ritual as one of “dread”.

Herself a school teacher in a Yerevan public school, she listed all the items that Armenia’s theoretically free education system did not cover: transportation, books, snacks, stationery, field trips, hygiene products, special events and more.

“We make long lists of items, and spend hours in supermarkets to compare prices before we buy,” Elena said.

Parents in Armenia are forced to shoulder a significant burden to ensure that their children received proper schooling, with some experts assessing that a third of the average Armenian household expenditure was on education-related costs.

A new government plan is intended to narrow the gaps between those who can afford extra help and those who cannot, although educational specialists warn that a more individualised approach will be needed.

While there is no official fee for public education in Armenia, families need to budget for covering multiple costs as well private tuition to compensate for the sometimes basic gaps in provision in state schools.

According to the OECD universal skills report, as of 2015 almost 45 per cent of students in Armenia lacked basic educational abilities and 20 per cent were functionally illiterate.

Elena said that her two oldest children had to take private lessons to fill in educational gaps.

Mher Davtyan, a senior educational expert with UNICEF, said that parents routinely paid for private lessons to fill gaps in knowledge, making “education related expenses… one third of the budget of middle-income families”. The older the children got, the more the academic gaps widened.

“Our educational system does not provide equal opportunities to all children in order to prepare for their smooth passage from school to university,” Davtyan continued, adding that this effectively excluded a whole tranche of society from further education and served to further aggravate discrimination.

UNICEF has reported that public school attendance in Armenia in recent years was 74 per cent.

Anush Lalazaryan, head of policy development at the ministry of education, sports and science, said that she did not know how many school age children were currently excluded from school because they could not afford extra costs.

Parliamentary hearings on amendments to the law on general education began in January, with the intention of broadly increasing access to education and addressing inequality.

The proposed changes include the further certification of teachers and school principals as well as expanding inclusion to take into account that those with special educational needs were not only children with physical or mental disabilities.

“Children who found themselves in difficult living conditions, are socially vulnerable, and have become orphans as a result of armed conflicts” will be included in this category, the bill read.

Lalalzaryan said that the amendments would also solve the problem of tutoring, thus easing parents’ financial burden. Indexes of teacher’s professional achievement would be reviewed, with those reaching a more advanced level able to apply for higher salaries ranging from 250,000 AMD (513 dollars) to 400,000 AMD (822 dollars).

“If teachers do not take care to improve their professional knowledge, then they will have no role in the school,” Lalazaryan said.

Critics argue that while the legislation might eventually improve attendance and standardise achievement, it would nonetheless fail to maintain creativity, interest and excellence.

Ashot Bleyan, headmaster of Mkhitar Sebastatsi educational complex, was sceptical about the plans.

“These changes are intimidating, rather than motivating,” he said, calling for a more individualised approach that included parents, teachers and students alike.

“The success of many of us is not conditioned by school,” Bleyan continued. “The opportunities of self-education should be explored.”

Lalazaryan urged patience, adding, “Large scale changes are underway, but it is not possible to change things in one day.