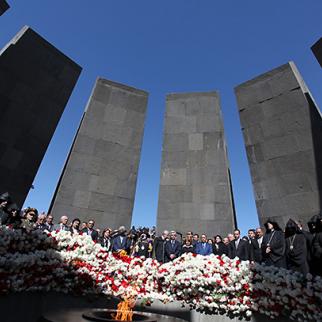 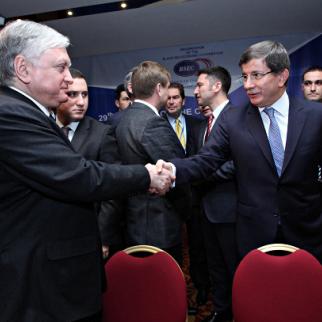 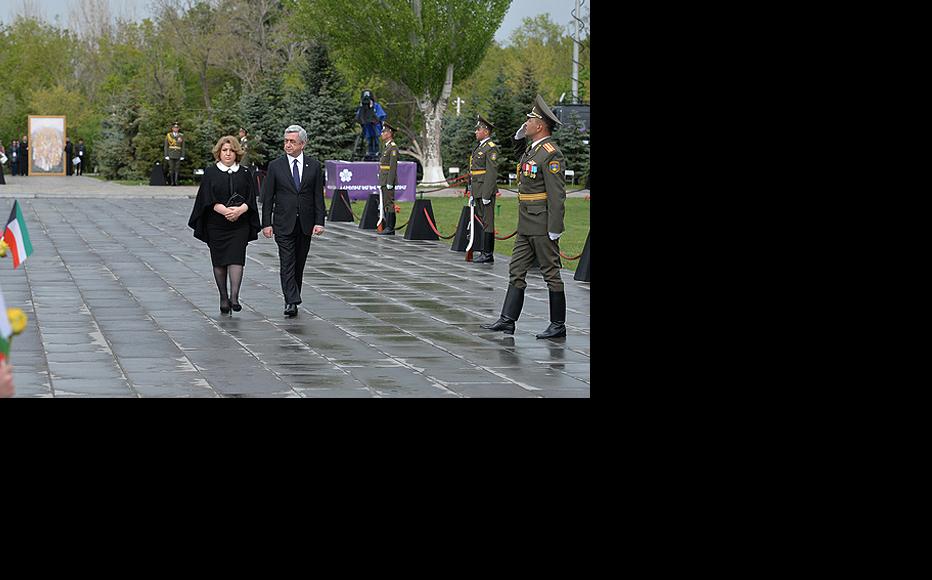 As dignitaries gathered for  Armenian Genocide Remembrance Day on its 100th anniversary, the campaign for more states to adopt the word “genocide” appeared to be making headway.

Sixty-five countries sent representatives to Yerevan to remember the Armenians killed in Ottoman Turkey in 1915. An estimated 1.5 million died; others were deported from eastern Turkey to Syria and other Middle Eastern countries, many of them moving into the large diaspora elsewhere.

“The cruel but now retreating machinery of denial is countered by conscience and honesty,” President Serzh Sargsyan said at the commemoration. “Recognising the genocide is not some global gift to the Armenians or to the victims… it is a victory for humanity’s conscience and honesty over intolerance and hatred. We must find a resolution before humanity once again betrays its pledge of ‘never again’.”

The day before the event, bells rang out at Etchmiadzin, the seat of the Armenian Apostolic Church, and all around the world as 1.5 million dead were canonised en masse.

Armenia has lobbied world states to recognise the 1915 killings as genocide and to use that word. Twenty-five have done so, but modern Turkey continues to fight the use of the term and insist that the deaths were just part of the First World War.

On April 12, Pope Francis I spoke of 1915 as “the first genocide of the century” which, with the Nazi and Stalinist atrocities that followed, was one of “three massive and unprecedented tragedies" of the 20th century. Turkey recalled its ambassador from the Vatican.

The Pope’s landmark use of the word “genocide” was followed three days later by a European Parliament vote in favour of a resolution that also used the term, and urged Turkey to “use the commemoration of the centenary of the Armenian Genocide as an important opportunity” to “come to terms with its past” and recognise the genocide. The resolution also asked all European Union members to do the same.

The United States and Britain are among the more prominent non-recognisers. The US Congress has not passed a recognition resolution, and President Barack Obama has stopped short of doing so, referring instead to the Armenian term “Meds Yeghern” (“Great Crime”).

Russian president Vladimir Putin and French leader François Hollande, both of whose governments have recognised the genocide, were among the heads of state joining Sargsyan for the event.

“There are words – and important words – that have already been said in Turkey,” Hollande said, “but others are still awaited, in order for sharing in sorrow to become sharing in a common destiny.”

The “words” Hollande was referring to were clearly those of then Turkish prime minister (and now president) Recep Tayyip Erdoğan who, in April 2014, expressed sympathy with Armenians over the mass killings and spoke of “our shared pain”.

Although Erdoğan did not use the word “genocide”, apologise or ask for forgiveness, his remarks were seen as a first step towards reconciliation with the Armenians, and also with the state of Armenia, with which his country’s relations have been poor. By autumn last year, an apparent willingness on both sides to move towards a rapprochement had faded. In February 2015, President Sargsyan announced that he had formally recalled a set of accords with Turkey from parliament because of an “absence of political will” on Ankara’s part to resolve their differences. The accords were signed in Zurich in 2009 during an earlier unsuccessful attempt at a rapprochement.

Experts in Armenia say the 100th anniversary coupled with Pope Francis’s statement are a watershed in the long-running campaign for genocide recognition. With key world states and figures speaking so unambiguously, the argument is in a sense won, and in may be time for a shift in the focus of diplomatic efforts on the issue.

According to Suren Manukyan, deputy head of the Armenian Genocide Museum in Yerevan, the government invested a lot of money and effort in the centenary and will not be able to afford to do the same in future years, nor does it make sense to do so. What is needed now, he argues, is the mundane tasks of diplomacy and historical research, in an attempt to make quiet but significant gains in those areas.

“The ball has been passed to the embassies which will engage on a daily basis with politicians, the public, and the press in the countries [they work in], starting from a fairly strong position,” he said.

Ruben Melkonyan, deputy head of Oriental studies at Yerevan State University, agrees that the campaign needs to become more subtle and diverse. He believes the approach, or approaches, need to be discussed in Armenia and in the diaspora, but should include statesmanship, actions by the Armenian church, and person-to-person contact.

Alongside Genocide Remembrance Day, Yerevan hosted a forum called Against the Crime of Genocide, which discussed both the Armenian experience and wider historical issues.

The 600 delegates included some from Turkey who favour reconciliation through a recognition process.

Turkey should seek forgiveness for what it did, normalise relations with Armenia by opening its border and ratifying the [2009] Zurich accords without preconditions,” Ufak Uras, a former member of the Turkish parliament, said. He argues that the current policy of non-recognition is “nothing other than complicity in the crime”, whereas recognition could lay the way to a better future.

Arevik Sahakyan is a freelance journalist in Yerevan. Armine Martirosyan is Yerevan correspondent for the Kavkazsky Uzel news site.