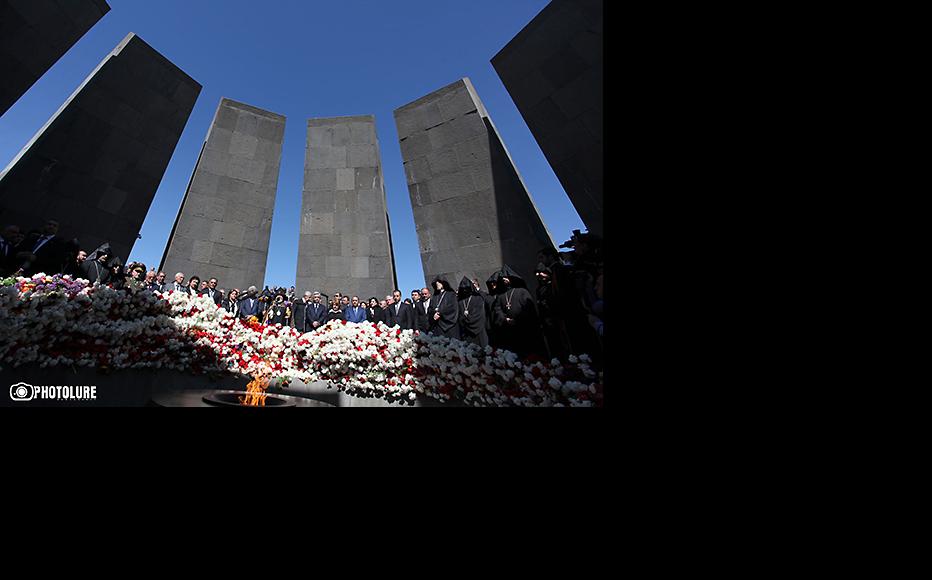 Commemoration at the Armenian Genocide Memorial in Yerevan, April 24, 2013. (Photo: Photolure agency)
The link has been copied

Armenians were pleased to hear Turkish prime minister Recep Tayyip Erdoğan expressing sympathy over the mass killings that occurred during the First World War, but noted his failure to use the word “genocide”, apologise or ask for forgiveness.

Armenians mark Genocide Remembrance Day on April 24, the day in 1915 when Ottoman officials arrested 800 Armenian intellectuals in the capital Istanbul. Most of whom were later killed.

More than two million Armenian Christians lived in the Ottoman Empire, and researchers estimate that three-quarters of them were killed in the violence as the community was uprooted and deported.

Over 20 countries have officially recognised the killings as genocide, including France, Russia, Sweden and Germany. Many Turkish academics and public figures have also used the word, including Nobel Prize winner Orhan Pamuk, but their government continues to resist doing so.

“April 24 carries a particular significance for our Armenian citizens and for all Armenians around the world, and it provides a valuable opportunity to share opinions freely…. It is a duty of humanity to acknowledge that Armenians remember the suffering experienced in that period, just like every other citizen of the Ottoman Empire,” Erdoğan said in a statement issued on April 23. “The events of the First World War are our shared pain. To evaluate this painful period of history through a perspective of just memory is a humane and scholarly responsibility.”

Erdoğan said Turkey was opening its archives up to researchers, but he was also clear that he would not allow debate to turn into criticism of his country.

“Using the events of 1915 as an excuse for hostility against Turkey and turning this issue into a matter of political conflict is inadmissible,” he said.

The Turkish leader’s remarks failed to satisfy the government in Yerevan.

“We have carefully studied the Turkish prime minister’s statement, and we have tried to see it as a first attempt to confront history, but regrettably we must say that it is just another, though perhaps more refined, attempt to deny and conceal the fact of the Armenian genocide,” Vigen Sargsyan, President Serzh Sargsyan’s chief of staff, told the Armenpress news agency a few hours after Erdoğan issued his statement. “More is required from Turkey – to acknowledge and unequivocally condemn the crimes committed during this period.”

Vigen Sargsyan said Ankara claimed to be inviting Yerevan to discuss the matter while simultaneously refusing to ratify the inter-state protocol agreements drawn up in 2009 to improve relations and open the border between the two states.

Armenia has not ratified the protocols, either, but in remarks on April 24, President Sargsyan said Turkey needed to make the move first, and could use the 100th anniversary of the Armenian genocide next year to show it had changed.

“This could be an opportunity for Turkey to repent, and wipe clean the stain of history. Words are no longer enough for it to show its relationship with to Armenia. It requires specific steps, the opening of its border and the establishment of normal relations,” the president said.

The opposition Dashnaktsutyun party is heavily involved in lobbying world states to recognise and use the word genocide. Giro Manoyan, who heads the party’s political department, said Erdoğan might well be reacting to the fact that more and more countries were doing so.

United States president Barack Obama was one of many world leaders who made special statements on April 24, though he avoided the word “genocide” by using the Armenian term “Meds Yeghern” (“Great Crime”).

“Peoples and nations grow stronger and build a foundation for a more just and tolerant future by acknowledging and reckoning with painful elements of the past,” he said in a statement. “We recognise and commend the growing number of courageous Armenians and Turks who have already taken this path, and encourage more to do so, with the backing of their governments and mine.”

Turkey, Armenia
Connect with us