How the arrogance of a ruling elite, determined to retain power, triggered public rage.

How the arrogance of a ruling elite, determined to retain power, triggered public rage. 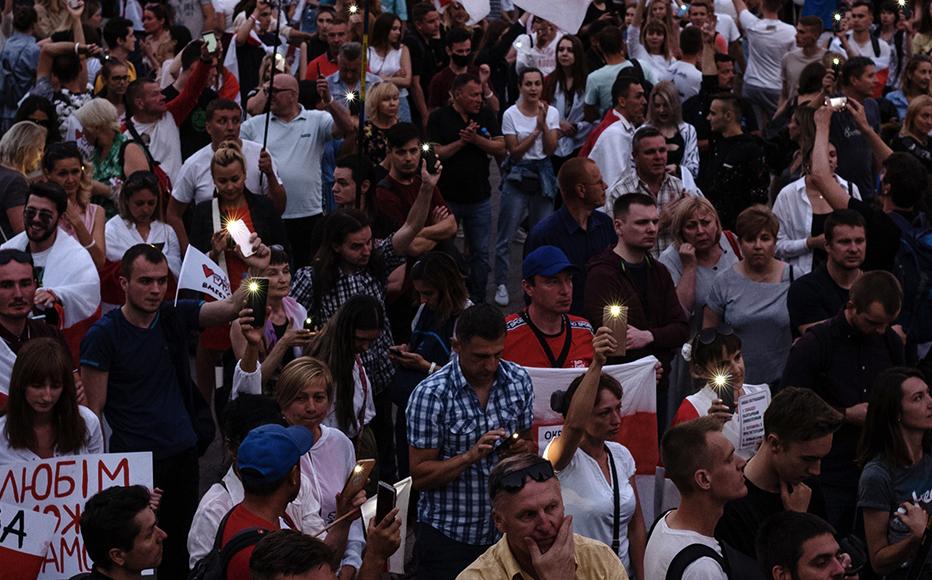 Demonstrators participate in an anti-Lukashenko rally on August 18, 2020 in Minsk, Belarus. © Misha Friedman/Getty Images
The link has been copied

The images of mass protests in Belarus, with crowds of more 100,000 demonstrators demanding change, cannot help but remind Armenians of their own Velvet Revolution in 2018.  In both cases, the crisis was triggered by the overconfidence of a ruling elite.

In Armenia, it was President Serzh Sargsyan’s arrogance in seeking to stay in power as prime minister that was the tipping point.  For Belarus, it was the egregiously falsified presidential re-election of strongman Alexander Lukashenko after 26 years in power that triggered a wave of unrest.

A stark difference is that Armenia’s uprising was exceptional for its reliance on disciplined non-violence; in Belarus, the security forces’ harsh, abusive response to peaceful protestors stands out in grim contrast.

But in both countries, the confrontation between potent people power and an increasingly desperate and defensive regime crackdown demonstrates the weakness and fragility of a political system based on fear and repression, rather than on legitimacy and popular support.

As is now evident from the experience of both Armenia and Belarus, the momentum of civic protest and demand for critical change can overtake fear or hesitation, forcing the incumbent regime into a defensive posture barely capable of responding and reacting.  In this context, the protests in Belarus are now past the tipping point, with no retreat or resolution likely.

Another important parallel in both cases is that geopolitics only had a secondary, external role in the unrest.  For both Armenia and Belarus, the driver for unrest was rooted in confrontation over domestic issues, and much less any strategic contest or choice between Russia and the West.

This important distinction also defines the limits of external engagement, whether from Moscow or Brussels, and defends the thesis that in both Armenia and Belarus, local politics and economics are much more important than larger geopolitics.

In a more surprising development, however, their cases have significantly diverged, specifically driven by Armenia’s response to developments in Belarus.

Ironically, the leader of Armenia’s Velvet Revolution, Prime Minister Nikol Pashinyan, has become much less an inspiration and much more of an irritant for opposition demonstrators in Belarus.

In what can only be seen as either a crude repudiation of principles or a critical resignation of statesmanship, Pashinyan faltered by extending a message of congratulations to Lukashenko immediately after the August 9 “re-election.”

For an Armenian government proudly heralding its own democratic credentials, this political misstep was further enhanced by a policy mistake when Armenia abstained from a more recent UN vote deploring human rights abuses in Belarus.

And while the Armenian government has defended these moves as necessary, based on the two countries’ linkage as members of both the Russian-led Collective Security Treaty Organisation (CSTO) and the Moscow-dominated Eurasian Economic Union, the diplomatic cost for Armenia from endorsing the authoritarian regime in Minsk may be much greater than any possible dividends from pleasing Putin.

For Russia, the implications from Belarus are as significant as they were sudden.  Although Lukashenko was never easily embraced by the West, as his authoritarian rule greatly damaged his ties to the EU, he was equally never effectively endorsed by Moscow, as his argumentative handling of Russian demands for greater integration diminished his country’s dependence on Russia.

Yet in this situation, Moscow is the only patron available to Lukashenko.  And a weakened autocrat in Belarus may be a more attractive option for Moscow, more vulnerable to Russian pressure and much more compliant.  This context suggests that from a Russian perspective, Belarus may become a more desirable ‘supplicant state’, with an isolated leader in Minsk as a much more submissive figure.

As it has been thus far in Belarus, Russia’s response to Armenia’s Velvet Revolution was uncharacteristically permissive and passive. A more delicate policy of leveraging economic necessity and energy dependence for both Armenia and Belarus may offer Moscow a more effective means to project its power over the longer term.