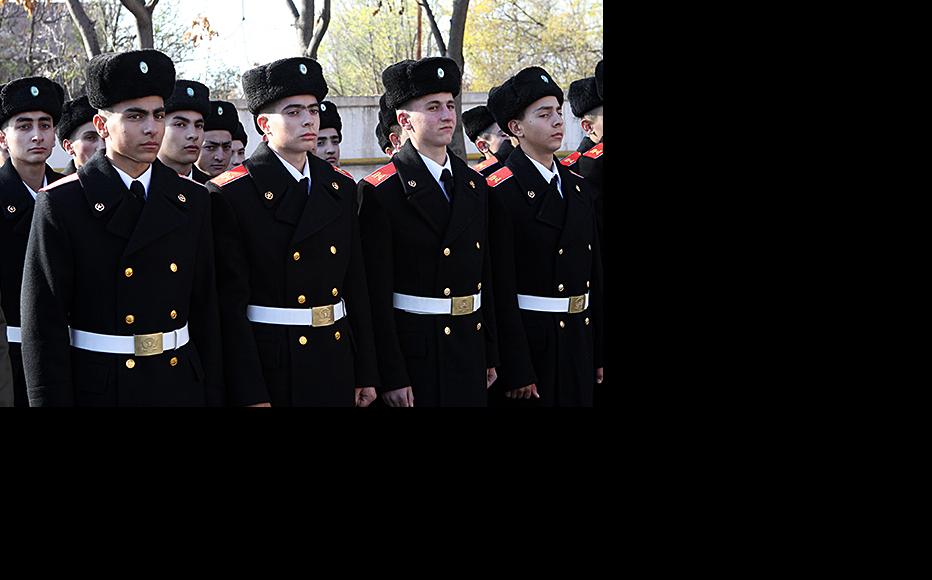 Armenian officer cadets. The government suspects that many less willing recruits go abroad to study instead. (Photo: Photolure agency)
The link has been copied

New rules designed to stop young Armenians going abroad to study as a way of avoiding army conscription will prevent all but the wealthiest benefiting from a foreign education.

Until now, young men who take up study places abroad have been automatically exempt from army service. A proposal approved by the government on January 23 would change that, requiring students to hand over 8.5 million drams (20,000 US dollars) as security, which they will get back if and when they return. Then they will be drafted into the military, if required.

The authorities say the refundable sum is intended to guarantee that students come back, and to deter would-be draft-dodgers from exploiting the loophole.

Tigran Sahakyan, head of the external relations and diaspora department at the education ministry, said around 200 people were leaving the country every year to go on academic exchange programmes administered by the ministry.

Some 80 to 90 per cent of them were male, he said, and it was clear many just wanted to avoid military service.

“In the last two or three years, we have noticed that the male applicants coming to us aren’t really interested in what country they go to or what course they’ll do. They just want to leave so as to gain exemption from the army. The proof is that they apply to sit every single test,” he told IWPR. “That creates an unhealthy, unfair atmosphere, since there are people who really want to get an education but who fail the tests.”

Sahakyan said the payment had nothing to do with the cost of foreign study, which varied from country to country and, in the case of exchange programmes, was paid for by the host state.

Aharon Adibekyan, head of the Sociometer Research Centre, argues that the government has every right to engage in social engineering to boost the number of personnel available for active service.

“Around 5,000-6,000 Armenian students study abroad, and surveys we’ve done show that two-thirds of them don’t come back. Armenia’s birth rate has fallen sharply, and this has serious implications for our defence capacity,” he told IWPR. “Every country resolves its problems in its own way. The government is doing this to protect the state’s interests, and there’s nothing odd about that.”

Students and rights activists say the challenge of finding such a lot of money will prevent all but the wealthiest from furthering their education abroad.

Vahe Hakobyan, a 17-year-old at an IT college in Yerevan, said he would now be unable to accept an offer of a study place abroad.

“Sadly, my parents’ only income is their monthly salary. They don’t have the money to pay a deposit and send me abroad to study,” he told IWPR. “That this upsets me, since there are far better-qualified specialists outside the country and I’d have had an opportunity to acquire a higher qualification. After completing my studies, I was planning to return and work here. I didn’t intend to run away.”

Artur Sakunts, head of the Vanadzor office of the Helsinki Civil Assembly, said that only the rich and well-connected would have access to a world-clas education.

“The government has implemented no reforms; it has pursued dead-end policies and created a situation where people are forced to leave the country,” Sakunts said. In this case, he said, “Human resources are being treated purely as a security problem, not in terms of economic, cultural and scientific development.”

Arsen Manukyan, who has been at the Higher School of Economics in Moscow for the three years, agreed that the rules would simply widen the gap between the haves and the have-nots.

“The world is developing a knowledge-based economy, but they are taking away our chance of developing intellectually as a society,” he added.

Aram Vardevanyan, head of legal analysis at the Armenian human rights ombudsman’s office, said the current proposal had in fact been watered down. Government officials originally wanted to scrap the exemption from immediate conscription granted to students going abroad, and only backed down after the ombudsman’s office intervened.

“Entirely annulling the right to exemption could have led to a breach of the rights to education and to free movement. We therefore suggested that the government set objective legal standards which one could fulfil in order to receive an exemption,” he told IWPR.

Gohar Abrahamyan is a correspondent for ArmeniaNow.com.