Armenian Protests End, But is it Truce or Draw?

After initial confrontation, demonstrations die down in fairly amicable manner.

Armenian Protests End, But is it Truce or Draw?

After initial confrontation, demonstrations die down in fairly amicable manner. 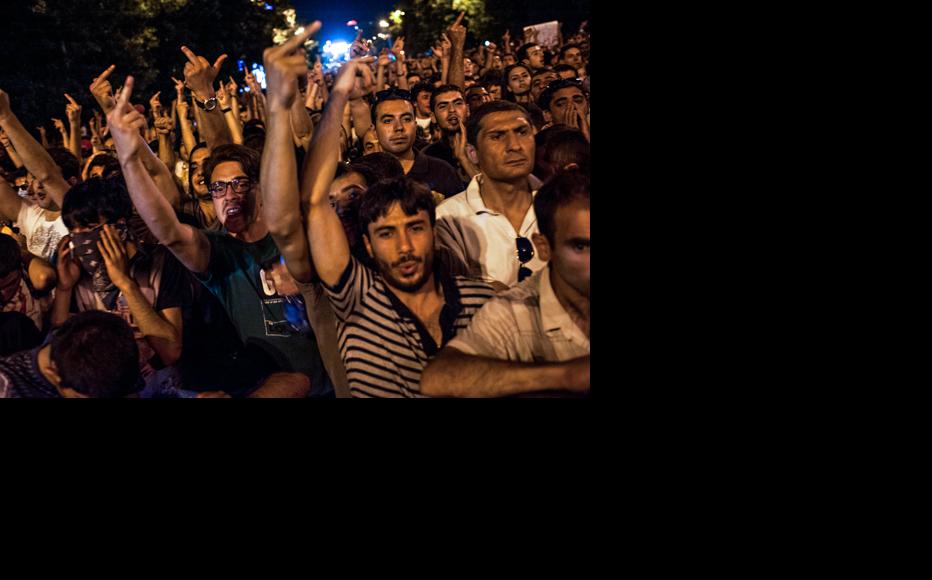 The number of demonstrators increased soon after police tried to end the rally by force. June 23, 2015. (Photo: Nazik Armenakyan)
The link has been copied

Although the mass demonstration against electricity price rises in Armenia fizzled out two weeks ago, organisers say they are ready to resume if need be.

After police moved in with physical force and water cannon on June 23, more demonstrators came out into the streets and a sit-down rally began on the central Baghramyan Avenue. (See Armenia Electrified.)

President Serzh Sargsyan's intervention on June 27 was crucial to defusing popular anger. He made concessions on some but not all the protesters’ demands, promising that consumers would not have to pay the extra charges until an independent audit of ENA was completed.

“We realised it was time to change the format,” Vaghinak Shushanyan, a member of the coordinating group No to Robbery, told IWPR. “The wave of protest began receding after the authorities made certain concessions. It would have been dangerous to whip up the situation artificially. Under the circumstances, we suggested shifting the rally to Freedom Square. Some of the demonstrators followed us and the rest, the majority, stayed where they were. After that, the protest started dying down.”

In the end, police moved in on July 6 to clear the remaining demonstrators off Baghramyan Avenue, and although they briefly detained several dozen of them, there was little trouble.

Organisers were quick to claim they had not been outmanoeuvred.

“The struggle has not peaked; it is simply changing shape,” said David Sanasaryan, who was part of the group that set up the Stand Up Armenia movement, also involved in the protests. “A few days ago, we held a march and handed in a letter to President Serzh Sargsyan containing our demands – cancelling the electricity price rises and launching a criminal case around the fact that the energy sector is in danger of collapse.”

Sanasaryan said that if the authorities did not fulfill the demands, further rallies and demonstrations would follow, and a campaign would take place to urge people not to pay.

Shushanyan agreed, warning, “This isn’t the end of it.”

Sergei Minasyan, deputy head of the Caucasus Institute in Yerevan, believes that renewed protests are likely given the general level of public resentment.

“That’s only natural given that there’s effectively no strong opposition, but there is acute social and economic discontent in society. Under circumstances like this, popular resentment about a range of issues could spill out into the streets,” Minasyan said. “It’s clear that any unpopular decision by government will bring thousands of people out into the streets from now on. There’s now a precedent for it.”

Minasyan noted the marked change in the authorities’ tactics after the failed police action of June 23. After that, officials adopted a softer tone and some politicians even came close to expressing sympathy with the protestors.

Hovhannes Sahakyan, a member of the ruling Republican Party and chair of the parliamentary committee on legal affairs, said he was “very pleased” to see young people out demonstrating but not breaking the law.

“This problem mustn’t be resolved by force. Talks are what’s needed,” he added.

Even Armenia’s police chief Vladimir Gasparyan sounded a conciliatory note and guaranteed that there would be no more tough action.

“Young people have to go a bit crazy or else there won’t be any progress,” he said.

In Minasyan’s view, comments like this show that the authorities realised that hard-line methods would be counter-productive.

The apparently successful tactics the government settled on were at odds with the view from Moscow. The Russian media portrayed the demonstrations as a repetition of past “colour revolutions” in various post-Soviet states, and specifically of the protests in Ukraine last year that brought down the government, and argued that they must be a Western plot to destabilise Armenia, a long-term ally.

“The [Russian] media did not anticipate these developments, so they picked the simplest dictionary definition of “public protest” – as ‘colour revolution’,” said Andrei Sushentsov of the Valdai International Discussion Club, a group that promotes debate between Russia and the international community.