Politicians respond to public concerns about low living standards, but it's unclear whether pledges will be honoured beyond election day.

Politicians respond to public concerns about low living standards, but it's unclear whether pledges will be honoured beyond election day. 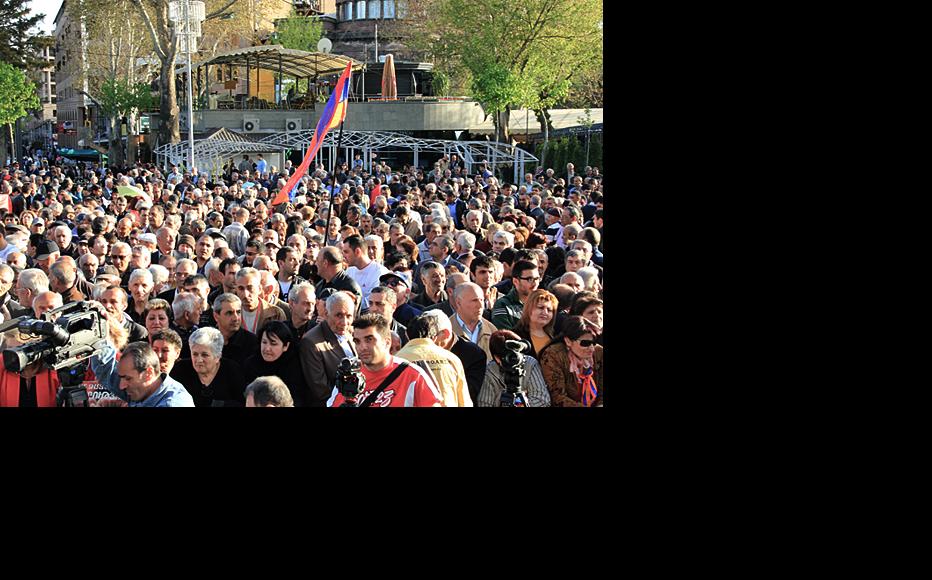 Armenians are becoming increasingly vocal in their calls for change. This is a rally of the opposition Armenian National Congress. (Photo: Arka news agency)
The link has been copied

Parties campaigning for Armenia’s May 6 parliamentary election are focusing on social and economic issues rather than foreign policy, for the first time for many years.

The shift in focus has surprised political observers in the country, who have got used to parties talking about the Nagorny Karabakh dispute with Azerbaijan, the Armenian genocide and the troubled relationship with Turkey.

However, some analysts say the proposals on offer from the various parties look like populist promises to increase public spending without a clear plan as to how this could be funded.

“This time, three or four parties have presented voters with programmes containing concrete measures that I don’t recall seeing in any previous election,” Tatul Manaseryan, head of the Alternative research centre, said. “All the programmes bear many similarities. In most if not all cases, we’re talking mainly about promises to provide jobs. They forget that we’re having a parliamentary election, and parliament does not create jobs.”

Eight parties and a coalition of smaller ones are fighting for places in parliament. Most opinion polls suggest that the pro-government Republican Party and its coalition partners the Prosperous Armenia and Rule of Law parties will win seats, as will the opposition Armenian National Congress, Dashnaktsutyun and Heritage parties.

Opinion surveys such as one conducted by Russian pollster VTsIOM for Shant television indicate that most Armenians see social problems as the highest priority. Some 51 per cent of respondents in that poll said it was unemployment that worried them most, while another 25 per cent named low living standards.

The unemployment rate in the country is officially 6.2 percent, but that figure conceals the large numbers of people who have gone abroad in search of work.

Political parties both in government and in opposition have responded by tailoring their campaigns to meet these public concerns.

“Economic development will be directed towards providing people with work and a decent salary,” President Serzh Sargsyan, head of the Republican Party, said in a speech he made in Sisian, a town in the southern Syunik region.

Now that the institutions of state and national defence had been built up, Sargsyan said, “we can concentrate on resolving the problems facing all citizens and on improving their standard of living – which is no less important”.

Tatev Sargsyan, an analyst with the Caucasus Institute in Yerevan, said the various parties had made plenty of promises, “but they rarely give an answer as to how they plan to do it. All the parties focus on people’s difficult social circumstances and the problems facing rural areas and small and medium-sized businesses, but only a few are proposing systemic reforms”.

The Rule of Law party, for example, “is talking about numerous social reforms, raising pensions and salaries, and creating jobs. There are a lots of proposals to draft and implement whole programmes, but what these programmes are and how they will be implemented is not stated,” Sargsyan said.

The Armenian National Congress wants to double state pensions and raise average monthly wages to 245,000 drams, around 620 US dollars. Hrant Bagratyan, a former prime minister, said his party would fund the increases by curbing Armenia’s oligarchs and ending monopolies.

“We are not promising to create jobs, but to create the conditions for people to be self-employed,” he said. “Robert Kocharyan and Serzh Sargsyan [former and current presidents] have talked every year about creating 50,000 to 100,000 jobs, but in the last 12 years the number of unemployed people has risen from 80,000 or 90,000 people to 302,000. The ANC says it will create 500,000 entrepreneurs by lifting the monopolies so that people can take an active part in the economy.”

Experts question whether the wage increases on offer are at all possible.

“At least half the workforce – 550,000 people – now earn less than 80,000 drams. The opposition knows this, and is just trying to fool people,” Karlen Khachatryan, a lecturer at Yerevan State University, said. “A sharp increase in the minimum wage could have negative consequences – increasing the size of shadow or concealed employment and spurring inflation. Increasing average wages can only be done by reducing unemployment and improving labour productivity. But you can’t achieve that in a month or a year; you need a long-term policy.”

Khachatryan said parties should avoid making populist promises that would do more harm than good.

“Combating the shadow economy and the monopolies in a short-term way cannot be effective. Systemic, well-thought-out steps are needed. Citing figures and making declarations are no more than populism unless they’re underpinned by serious analysis.”

Now the parties have to convince the average voter that they will stick by their pledges. Judging by the reactions of people like Yerevan resident Rita Sargsyan, 56, that will take some doing.

“Both on the right and on the left, everyone is promising mountains of gold – high wages and pensions. But once they come to power, they’ll forget all about it,” she said. “I’m fed up even listening to them. Many of them have been in power before, and others are in power now, but the situation hasn’t changed much. They should try living on these [current] wages and pensions.”