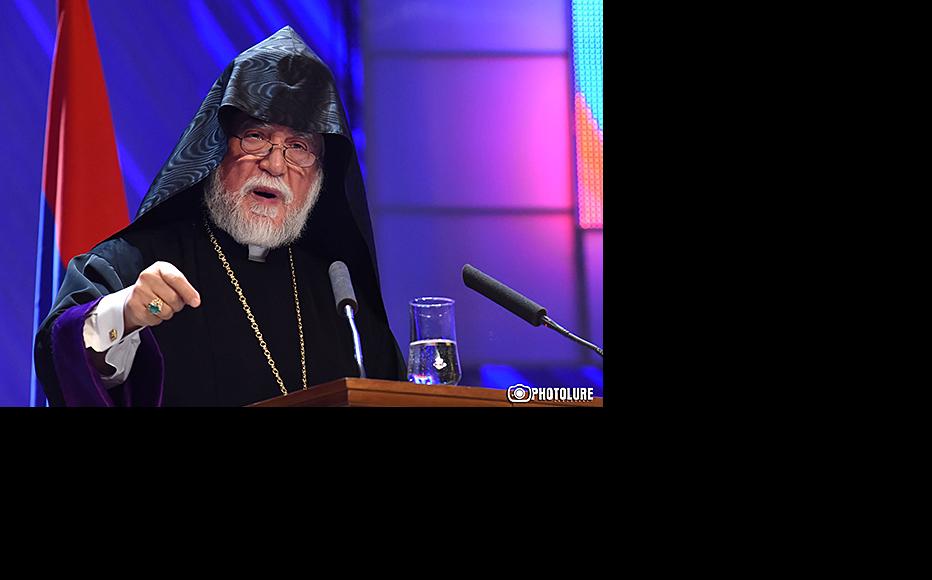 Catholicos Aram I addressing the Armenian diaspora conference in Yerevan, September. (Photo: Photolure agency)
The link has been copied

A plan by leading Armenian clerics to seek legal redress from the Turkish judiciary for church property lost in the early 1900s takes the campaign for genocide recognition to a new level, analysts say.

Aram I, the Catholicos or head of the see of Cicilia based in Lebanon, announced the lawsuit at an annual congress of the Armenian diaspora which opened in Yerevan on September 19.

“Here, before this meeting which represents our nation, we wish to announce for the first time that next year, the Catholicosate of the Great House of Cilicia plans to file a suit at Turkey’s constitutional court seeking the restitution of its historical centre, the Catholicate of Sis,” he said.

The Armenian Apostolic Church is an ancient and unique institution, not part of either the Orthodox or Roman Catholic worlds. It has two spiritual sees, the Mother See at Etchmiadzin in Armenia, and the “Great House” or holy see of Cilicia, in Lebanon.

The Great House of Cilicia was based in Sis, near the Turkish city of Adana, from the 13th century to 1921, when its leaders fled a fresh wave of killings. This followed the mass killings in 1915 which Armenians call genocide, a term Turkey hotly disputes.

Armenians have spent many years lobbying countries around the world to acknowledge that genocide took place and to press Turkey to do the same.

The planned lawsuit is a new approach which will take the dispute to Turkey’s highest court. Commentators have drawn direct parallels with the legal action taken to secure material restitution in post-war Germany for Jewish survivors of the Holocaust, through compensation or restoration of property.

The Armenian government has indicated it will support the church’s action. Asked about the plan during the same diaspora congress, Foreign Minister Eduard Nalbandyan said, “How can there be any other opinion about this? It’s essential to support this initiative.”

Catholicos Aram said a sound legal basis for the proposed court action had been crafted over the past two years. He added that “if our lawsuit is turned down by the Turkish constitutional court, we will go to international courts”.

Ashot Melkonyan, director of the Institute of History in Yerevan, says that as well as church property, large numbers of Armenian homes were lost. “In the 1920s and 1930s, everything was transferred to state ownership. Then the Turkish government sold some of it to the local Muslim population,” he said.

The property claim is especially will be particularly as 2015 is the year Armenia marks the 100th anniversary of the start of the bloodshed with the Genocide Commemoration in April.

Ahead of the 2014 commemoration, Recep Tayyip Erdoğan – then prime minister and now president of Turkey – issued an unprecedented but carefully-worded statement noting that “Armenians remember the suffering experienced in that period, just like every other citizen of the Ottoman Empire…. The events of the First World War are our shared pain.”

The omission of the word “genocide” meant that his remarks fell short of what Yerevan wanted. Presidential chief of staff Vigen Sargsyan called it as “just another, though perhaps more refined, attempt to deny and conceal the fact of the Armenian genocide”. (See Armenians Call on Turks to Say "Genocide".)

At the same time, there are signs both countries want to revive a process of rapprochement that began in 2008 but foundered in 2010. Armenian foreign minister Nalbandyan attended Erdoğan’s inauguration as president at the end of August, and handed him a formal invitation to attend the 100th anniversary commemorations in Yerevan. (See Armenia Sends Official to Erdoğan Inauguration.)

IWPR wrote to the Turkish foreign ministry asking it to comment on Catholicos Aram’s statement, but it declined to do so.

One reason for bringing an action now is that Turkey is under pressure to change its legislation on historical property claims.

“In 2005, Turkey, which is seeking to join the European Union, tried to bring its legislation into line with the requirements set by Brussels, which demand that illegally acquired property be returned to its rightful owners,” Vigen Kocharyan, head of the European and international law department at Yerevan State University, explained. “But the process was not completed.”

If a submission to the Turkish judiciary fails, then Kocharyan points to “a universal principle in international law according to which, when the judicial resources of a state have been exhausted, one can appeal to an international court”.

Manvel Sargsyan, director of the Armenian Centre for National and International Studies, says that a formal application for compensation or restitution is a new development in the long-running campaign by Armenia and its diaspora.

“We can see an apparent shift from demands to acknowledge the fact of genocide to a more concrete tactic of seeking compensation,” he said. “This is a new approach. In the near future, the compensation issue is going to be of increasing importance.”

Armenia, Turkey
Connect with us