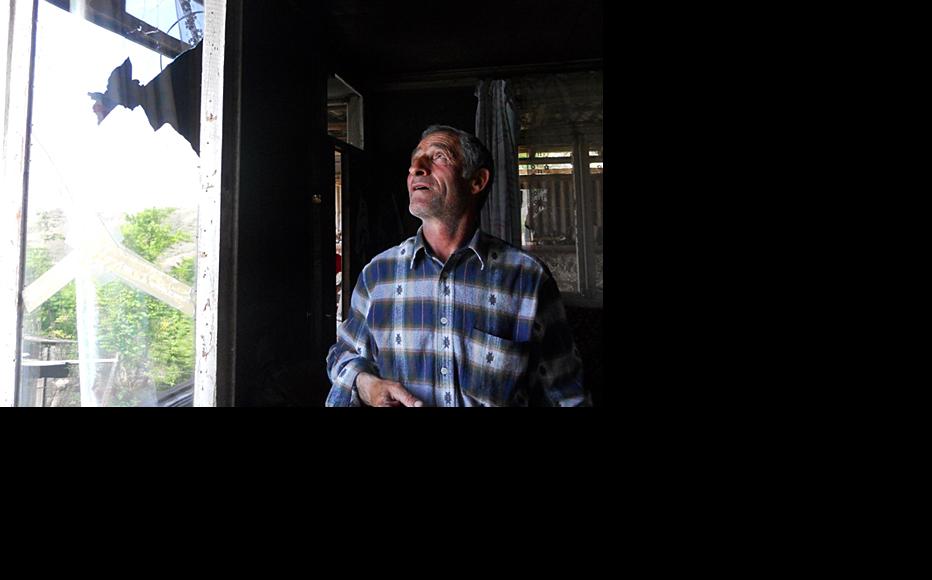 Volodya Petrosyan shows the damage done by bullets that struck his house in the village of Nerkin Karmiraghbyur. (Photo: Gohar Abrahamyan)
The link has been copied

A series of shooting incidents on Armenia’s border with Azerbaijan and around Nagorny Karabakh has heightened fears among local civilians, even though they are well used to the sound of gunfire.

The border village of Dovegh in Armenia’s northeastern Tavush region came under sustained fire for 90 minutes on April 25. Two days later, three Armenian solders were killed when their car was hit by shots fired over the border as it was travelling between the villages of Aygepar and Movses.

While sporadic gunfire is a constant danger to Tavush residents, they say it has been particularly intense in the last two months.

Samvel Soghoyan, the mayor of Chinari, a village right on the border with Azerbaijan said the 1,200 or so residents were effectively living under wartime conditions.

“The village is constantly being shot at. From 1992 until now, we have not had a ceasefire. They [Azerbaijanis] use heavy-calibre machine guns, which present a danger to any house. Most of the agricultural land is right on the border, so people don’t farm it,” he said.

In nearby Nerkin Karmiraghbyur, villagers have similar complaints.

“All the roofs of the house are full of [bullet-] holes,” Hakob Israelyan. “The residents live in permanent fear. It’s been quiet for several nights now, but ahead of the 20th anniversary of the liberation of Shushi [town in Karabakh], there was sustained fire from a heavy machine gun, and almost all the children had to be sent to neighbouring villages.”

Around Nagorny Karabakh, numerous shootings were reported. According to local Armenian forces, 650 separate violations of the ceasefire were committed by Azerbaijani forces between April 29 and May 12, amounting to 2,400 shooting incidents.

War in the early 1990s left an Armenian administration in control of Nagorny Karabakh, which declared independence from Azerbaijan. It has not won international recognition, and Azerbaijan continues to claim sovereignty. Although the conflict ended in a ceasefire in 1994, no peace deal was signed, and negotiations on conflict settlement and on Karabakh’s future status have made little progress.

Armenian and Azerbaijani troops face each other along the border between the two states, as well as along the “line of control” that separates them around Karabakh.

Exchanges of fire over the front lines are fairly frequent, and each side tends to accuse the other of provoking violence by shooting first.

“The Armenians strictly adhere to the ceasefire arrangements, and only respond when the opposing side breach it,” Armenia defence ministry Mushegh Aghekyan spokesman said with reference to recent events.

Political and defence analysts in Armenia suggested the upsurge in incidents might be a deliberate attempt by Azerbaijan to disrupt campaigning for their country’s May 6 parliamentary election, and also the May 9 celebrations for the anniversary of the Armenian capture of Shushi, a town in Karabakh, in 1992.

On April 27, the day the three soldiers were killed in Tavush, Armenian president Serzh Sargsyan was out campaigning for his Republican Party ahead of the election.

He assured voters that Armenia would retaliate for the killings.

“Let no one think they can exploit the political process going on in our country and assume we are too busy with elections. We have a strong army and we will take the steps that are required,” he said.

Defence Minister Seyran Ohanyan stressed, however, that Armenia favoured negotiations, not a resumption of conflict.

“They [Azerbaijanis] have shown yet again that the principles under which we reached the [truce] agreement, specifically including the principle of non-use of force, have been violated many times. But these actions will not benefit them in any way, since our view is that relationships are [framed] only through the negotiating process,” he said.

“In recent years, the reporting of ceasefire violations regime has become more open and transparent, and this often upsets people. The Azerbaijani side is aware of this. People are scared when they hear about the increased frequency of shooting incidents,” he said. “To reassure them, I should say that the shots fired from the Azerbaijani side are ineffective; they achieve nothing. We can react to ceasefire violations ten times more or less than we do now, but the key thing is that there shouldn’t be casualties – and that an impulsive reaction could restart the war.”

In Tavush region, many villagers have become resigned to outbreaks of shooting, even though the risks are real enough.

“They were shooting when my son was a year old, and now he’s 21 and they’re still shooting,” Lena Andreasyan from the village of Movses said. “It makes no difference – we aren’t leaving the village, as it’s our home. There was some very heavy gunfire three days ago, but when our lads started firing in response, they soon quietened down.

“The shots do damage house windows and doors. It’s rare to see a house that doesn’t have bullet holes.”

Gayane Mkrtchyan and Sara Khojoyan are reporters for ArmeniaNow.com.