Is Armenia-Turkey Détente Ahead?

Leaders of both countries have repeatedly hinted that direct talks on a rapprochement could soon begin.

Is Armenia-Turkey Détente Ahead?

Leaders of both countries have repeatedly hinted that direct talks on a rapprochement could soon begin. 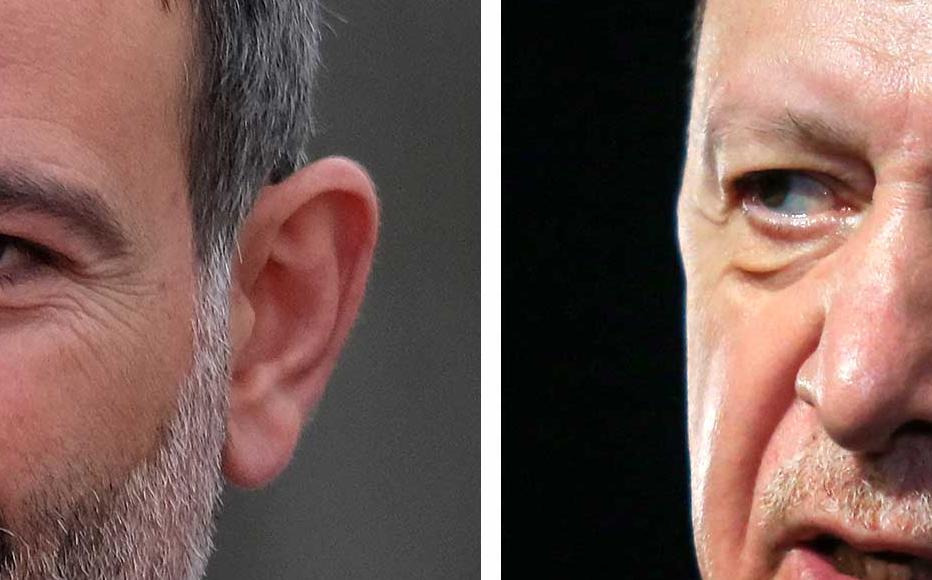 Armenian analysts have responded with caution to apparent overtures between Yerevan and Ankara over a possible détente between the two countries.

Both Armenian Prime Minister Nikol Pashinyan and Turkish President Recep Tayyip Erdoğan have repeatedly hinted in recent weeks that they were prepared to begin talks on repairing bilateral relations.

The two countries have never established diplomatic ties and their shared border has been closed since the early 1990s. Relations further deteriorated last year over the 44-day Nagorony Karabakh war, in which Turkish military support for Azerbaijan may have played a decisive role in its victory.

However, last month Erdogan said that Turkey was willing to open talks towards normalising ties if Armenia also “declares its readiness to move in this direction”. He has also raised the prospect of creating a regional platform that would help establish links from Turkey's Igdir to Azerbaijan, possibly via a rail route through Armenia.

In turn, Pashinyan told a September 8 cabinet meeting said that Erdogan’s remarks presented “an opportunity to discuss normalisation of Armenia-Turkey relations and de-blockade the Armenia-Turkey railroad and [other] communications. We are ready for such discussions”.

Pashinyan added that global players including Russia, US, EU, China and India would welcome such a move.

Oppositions figures have expressed scepticism about Pashinyan’s approach. Lawmaker Hayk Mamijanyan, of the Pativ Unem (I Have Honour) faction, said that Ankara’s lack of extensive preconditions made him question whether Turkey might have already have received some kind of assurances. Critics have previously accused Pashinyan of covert negotiations to end the Karabakh war, in which Azerbaijan took control of extensive territory previously controlled by Armenia.

Mamijanyan said that Pashinyan should “seek to dispel such doubts, or else [it means] he once again has decided to strike some sort of a backdoor deal”.

He said that progress could not be made without separating Armenia’ relations with Turkey from those with Azerbaijan.

“We want Turkey to realise – and we ourselves need to do it too – that Azerbaijan and Turkey are totally different entities and individual players in the region, whose interests are not necessarily identical,” Aghajanyan said.

Eric Hacopian, a contributor to Civilnet media, noted that successive governments in Armenia had supported the idea of normalising relations with Turkey without achieving any kind of breakthrough. He said that Baku’s opposition may play a part in this stalemate.

“Azerbaijan thinks they can impose their will or get the worst for us-best possible for them deal and any kind of a Turkish rapprochement with Armenia actually would weaken the case,” Hacopian said.

He added, however, that domestic Turkish considerations might derail any fresh efforts to start talks, given that the National Movement Party (MHP) - part of Turkey’s ruling coalition - would likely oppose better relations with Armenia.

As a result, Erdogan would be reluctant to press forward with any dialogue as he will need MHP support in the upcoming 2023 elections.

“His [Erdogan’s] words are meaningless, only his actions matter,” Hacopian continued. “I do not see anything changing on the primary relationship between those two countries until the fall of the Erdogan regime.”

However, historian Hrant Ter-Abrahamyan said that the very fact of holding talks with Turkey was in itself significant, even though it was important to have realistic expectations about what could be achieved.

“There is a lot to talk about with Turkey and it is expected that Armenian society cannot have a positive attitude towards that state – that is quite natural for understandable reasons – but we need to be pragmatic,” he said. “If Armenia and Turkey have something to give and receive, if they expect something from us – and it is through a dialogue that such a thing can be revealed – then we should follow that path. We needed to have it done earlier.”

Ara Sahakyan of the opposition Hayrenik (Homeland) party, said that although Armenian-Turkish relations needed to be slowly normalised, the internal politics of both countries did not currently support this.

“It needs to be done slowly, stage by stage,” he said. “The authorities need to understand that succeeding in laying the foundations of Armenian-Turkish relations would be an achievement by itself. But it will take more than one generation to achieve that. Such matters are not resolved by an [Armenian] government which has 53 per cent of votes, but rather by large coalitions.”