Armenia Takes One Step Towards Europe

Armenia Takes One Step Towards Europe 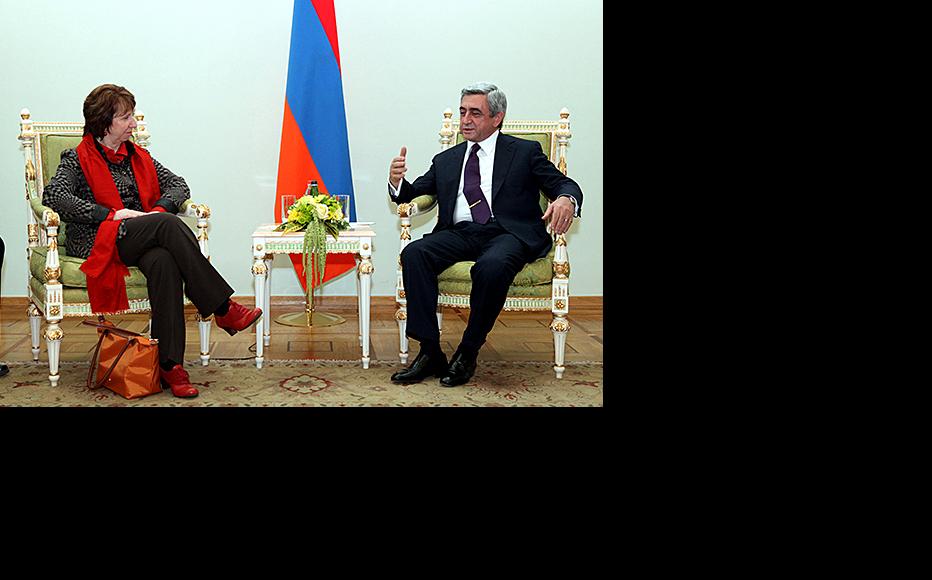 An impending deal with the European Union should be good news for Armenia’s struggling economy. But economists warn that the benefits of trade on preferential terms will take a long time to make themselves felt, because Armenia’s economy is in no shape to compete internationally.

Negotiations on the “Association Agreement” were successfully completed on July 24, and once it is signed at a meeting in Lithuania at the end of November, it will result in lower tariff and other barriers between Armenia and the EU, offering the country access to a massive market.

One immediate benefit is that Armenians will find it easier to get visas for the Schengen Zone, which includes most EU states.

Closer association with the EU has been a key aim of Armenian foreign policy for most of the post-Soviet period.

Talks on the Association Agreement with Armenia have taken three years.

In a statement, the EU commissioners for external affairs and enlargement, Catherine Ashton and Stefan Fule, said the agreement would “allow the EU and Armenia to drive forward together a programme of comprehensive modernisation and reform based upon shared values, political association and economic integration”.

“The agreement will have a direct positive impact on daily life and will bring Armenia and all its citizens closer to the European Union,” the joint statement said.

Zohrab Mnatsakanyan, a deputy foreign minister who was Armenia’s chief negotiator on the agreement, said he anticipated that the deal would finally be signed, ratified and in force by 2017 or 2018.

Officials say the deal could lead to a boost in trade between Armenia and the EU, already its biggest trading partner. But implementing the agreement will take time.

William van der Geest, a consultant on trade matters based in Yerevan, said the Armenian economy would take a long time to reach international standards, and judging by the experiences of countries like Romania and Bulgaria, there would be a transitional period before the terms of the deal could be fully implemented.

One decisive factor, he said, would be addressing the monopolies that currently dominate in Armenia.

“There are monopolies in the economy everywhere,” he said. “The question is about how we control them. This supervision process must allow new businesses to enter the market.”

Van der Geest predicts that “it will take five to seven years for the average Armenian to see the difference. In the long term, however, residents of Armenia will see a greater choice of goods and services on offer in their country. Thanks to the reduction of obstacles to import, goods will get cheaper. The growth of exports will create more jobs.”

Some commentators say the average Armenian has no idea of the significance of the EU agreement or its implications for them personally.

“Even the country’s parliament is only superficially informed about the points in the deal. The time has come to tell the people what the purpose of this agreement is,” said Naira Zohrabyan, head of the parliamentary commission for European integration.

In Zohrabyan’s opinion, the key aspects of the deal are the prospect of economic integration with Europe, impetus to combat corruption, and free movement for Armenian nationals.

She said the agreement should help keep the pressure on Armenia’s leaders to change the way politics and business were conducted.

“Armenia will be forced to undertake concrete, specific reforms, rather than just issuing announcements with neither the political will nor the readiness to implement them, which is what the government has always done up to now,” she said. “If, after the Vilnius summit [in November], Armenia slows the pace of reforms, I am certain the EU will be able to impose sanctions.”

An agreement unveiled last November and due to come into force later this year already allows for simplified – and cheaper – Schengen visa procedures for certain categories like official delegations, academics, students, journalists, sportspeople, artists, and relatives of anyone with permanent residency.

“Of course, at first the simplification of visas affects only a few sections of the population – students, academics, journalists and politicians,” Zohrabyan said. “But all the same, it will be a very important step. The degrading conditions for Armenian citizens applying for a Schengen visa at the moment are simply not appropriate to the current level and nature of Armenian-EU relations.”

Yekaterina Poghosyan is a reporter for the Mediamax agency in Armenia.