Journalists say the decriminalisation of defamation has left them facing a flood of actions.

Journalists say the decriminalisation of defamation has left them facing a flood of actions. 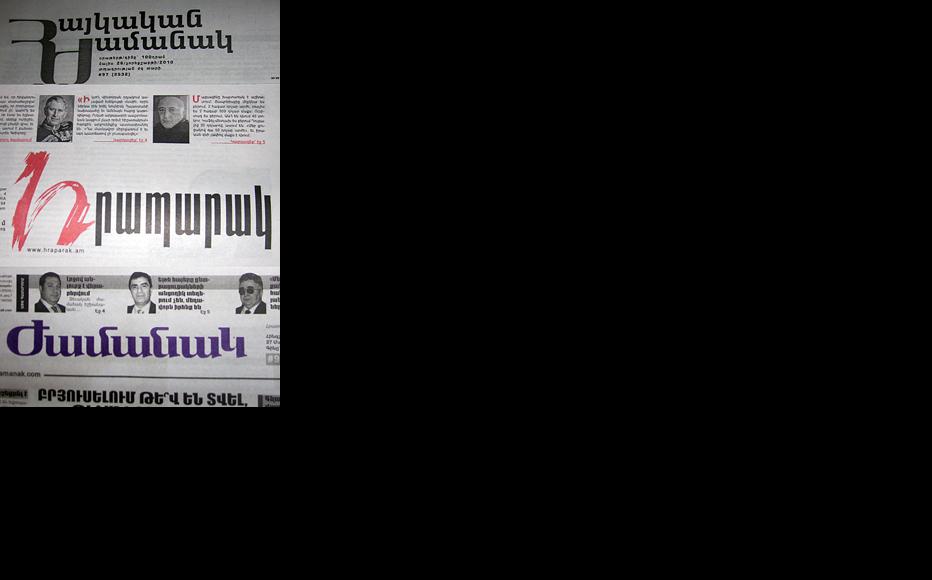 Newspapers that have been sued since the libel law reform. (Photo: Karine Ionesyan)
The link has been copied

Armenia’s decision to make libel a civil, rather than a criminal, offence has won praise from international organisations, but journalists say it has sparked a wave of cases against them that seriously affect their ability to work.

Before May last year, libel was a criminal offence investigated by prosecutors, and punishable by up to a year in jail. Now it is a civil offence and the plaintiff can claim damages of up to 2000 times the minimum wage, or 2 million drams (just over 5000 US dollars).

The change was welcomed by, among others, the Council of Europe and the Organisation for Security and Cooperation in Europe as a serious step towards true freedom of speech. It seems to have worked in the opposite direction, however.

Since May, officials past and present have launched a dozen libel cases against journalists all claiming the maximum compensation, prompting media organisations to claim that they risk paralysis.

“If the civil code allowed us to claim compensation of a billion, we would demand that much. We are talking about a deputy in the national assembly, you cannot say things like that about a deputy,” said Vahe Hovsepyan, the lawyer for deputy Tigran Arzakantsyan.

Arzakantsyan, who represents the Republican party, sued the Yerkir newspaper claiming that an article about the amount of time he spends gambling in casinos harmed his reputation, and demanded 3.568 million drams for legal costs on top of the compensation. Journalists and editors say officials are abusing the new law to stop them working freely.

“The removal of this law from the criminal code was a well planned step by the authorities, who wanted to take control of the opposition press. I cannot see another reason for it apart from the desire to settle accounts with those who dared to write something about them that was not completely positive,” said Arman Babajanyan, editor-in-chief of the Zhamanak newspaper, who is currently subject to three separate libel cases under the new law.

“In the first place, this could lead to self-censorship, when a journalist or editor will feel himself unfree and will be forced to think about whether publishing an article will lead to serious financial difficulties,” Shushan Doydoyan, of the Freedom of Information Center, said.

She said the legal definition of defamation was very vague, leading to potentially arbitrary decisions from judges.

The first guilty verdict under the new law was handed down in January. The court upheld the complaints of three deputies – Ruben Hayrapetyan, Samvel Aleksanyan and Levon Sargsyan – against the Haykakan Zhamanak newspaper. The judge ruled that the title had to pay each deputy 2.044 million drams in compensation.

Next was the turn of the weekly Hraparak, which saw its financial assets frozen at the request of the lawyer for ex-president Robert Kocharyan, who had accused the newspaper of defamation. After a storm of media outrage, the assets were unfrozen, and the case continues with Kocharyan demanding 6 million drams. His family is also demanding the same amount from Zhamanak in a separate case.

Armine Ohanyan, editor-in-chief of Hraparak, accused state ombudsman Karen Andreasyan of responsibility for the unfolding legal mayhem, since he took part in the discussions on the formulation of the law. Andreasyan denied responsibility, blaming the judges who, he said, needed to base their decisions on the precedents of the European Court of Human Rights.

“It is impermissible to demand that a journalist prove the plausibility and reliability of the opinions, assessments or commentaries they have published. Apart from this, journalistic freedom allows them to write certain exaggerations and provocative opinions,” he said.

Ashot Melikyan, head of the Committee for the Protection of Freedom of Speech, said the fault lay with the legal system.

“I remain convinced that the removal of defamation from the criminal code was a progressive step, but Armenia is a country where even a progressive step can lead to unexpected consequences,” he said, blaming the lack of an independent courts system and the authorities’ intolerance of criticism.

He said the main problems with the law were the high level of compensation set, and the broad definition of defamation which allows the judges a wide degree of personal interpretation of each individual case. He said his committee’s figures showed ten cases had been registered in the first three months of this year, on top of three registered last year.

On the plus side, however, the number of attacks on journalists has plunged since the law was passed. None were registered this year, nine last year and eleven in 2009.

“Before this journalists were beaten, intimidated, their cars were burned, their equipment was destroyed, etc. But now tactics have changed. They are being forced to shut up with the assistance of financial pressure,” Levon Barseghyan, chairman of the Asparez press club, said.

Lawyers are concerned by the cases, fearing that they could harm their image in society. Almost half of the sums claimed as damages go as legal expenses, so the head of the Chamber of Lawyers of Armenia, Ara Zohrabyan, and other lawyers have asked for judges to reduce the levels of compensation paid to lawyers to cover their fees to stop them looking like accomplices in the campaign.

Officials themselves refuse to comment on the allegations of harming freedom of speech, saying they are acting to protect their good names.

Mary Aleksanyan and Karine Ionesyan are correspondents for the online magazine Human Rights in Armenia.

Armenia
Media
Connect with us