Raffi Hovhannisyan rallies thousands to back his claim that he should be president.

Raffi Hovhannisyan rallies thousands to back his claim that he should be president. 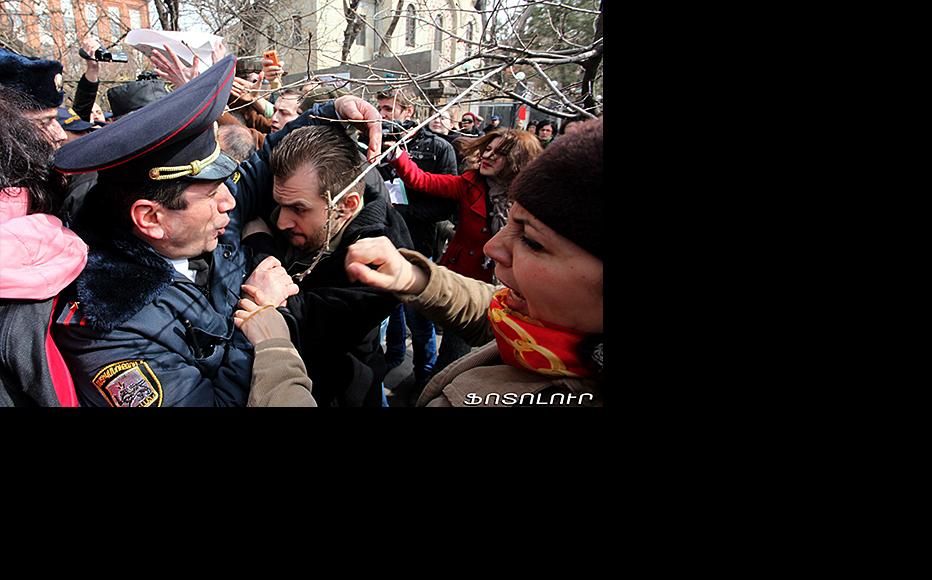 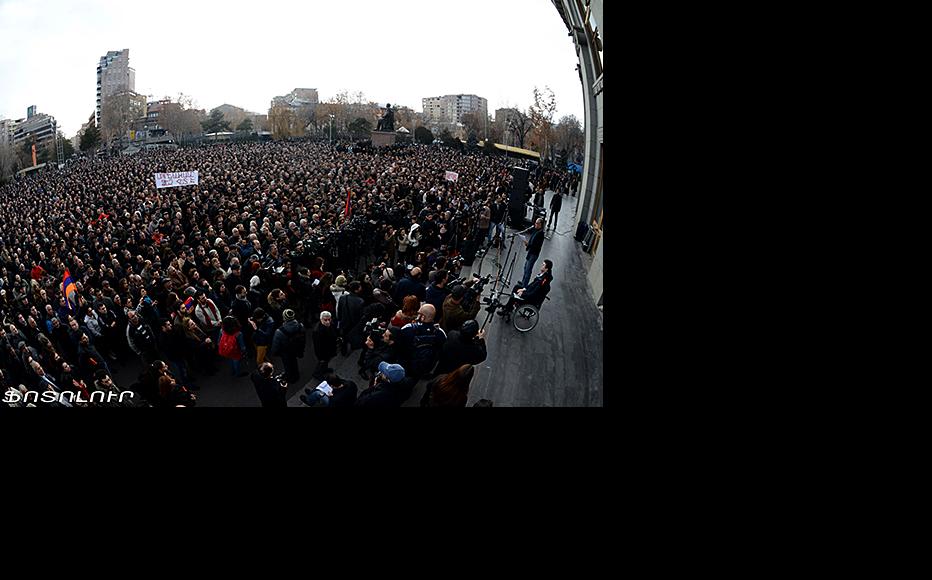 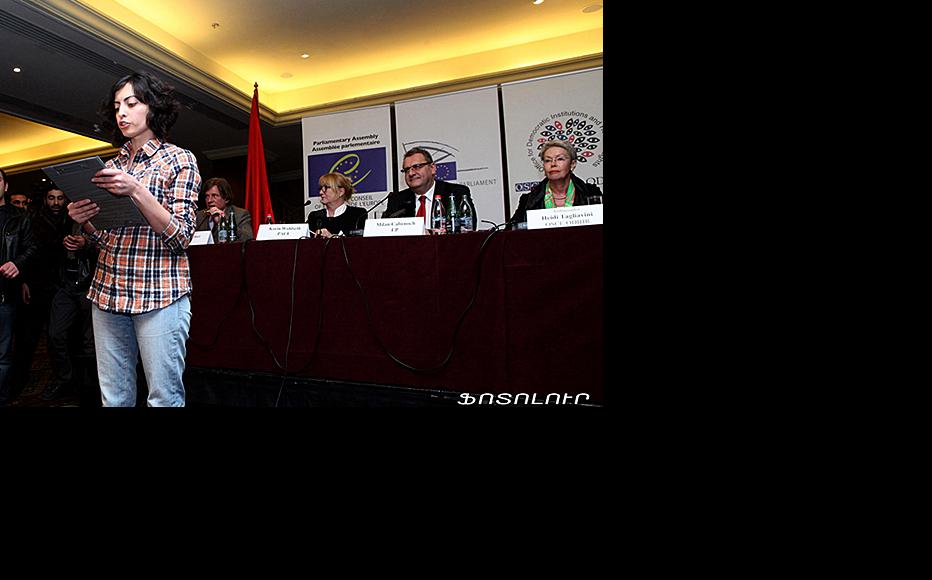 Lena Nazaryan of Transparency International speaks at a February 19 press conference by OSCE election monitors which she and other activists invaded. (Photo: Photolure agency)
The link has been copied

The main opposition candidate in Armenia’s presidential election, Raffi Hovhannisyan, has refused to accept defeat, and says the official figures are the result of widespread fraud.

Hovhannisyan has rallied supporters on the streets and pledged to use all legal means available to get the result of the February 18 ballot overturned.

Official results from Armenia’s electoral commission give Hovhannisyan 36.7 per cent of the vote, some way behind the incumbent, Serzh Sargsyan, who has declared victory with 58.6 per cent. The other five candidates scored lower percentages.

Sargsyan won by significantly fewer votes than most commentators had been predicting, but his opponent insists he actually lost. Instead, Hovhannisyan says he himself was the clear winner, with the backing of four out of every five voters.

“I am the newly-elected president,” he told journalists in Freedom Square in central Yerevan on February 19.

Three days later, Hovhannisyan had a meeting with Sargsyan at which the latter neither conceded defeat nor offered him concessions.

Hovhannisyan’s Heritage party, set up in 2005, is the smallest represented in parliament. But since Armenia’s leading opposition politicians refused to take part in the presidential election, Hovhannisyan’s appears to have acted as a unifying figure for anti-Sargysan, and this is reflected in his surprisingly strong showing, even according to the official poll figures. (See also Armenia Gears Up for "Least Interesting" Ballot.)

“The election results gave one a clear sense of voters’ distrust in and dissatisfaction with the government,” Artur Sakunts, head of the Vanadzor branch of the Helsinki Citizen’s Assembly, said.

Hovhannisyan was born in the United States and grew up there, moving to what was then Soviet Armenia in 1988. He served as the new state’s foreign minister in 1991-92.

“We will fight peacefully, as prescribed by the constitution, but our movement will not weaken,” he said. “We will secure new victories and take them to every town in our country, from north to south,” Hovhannisyan told the crowd.

Smaller protests took place in a number of regional towns.

Election observers have come out with differing assessments of how fairly – or unfairly – the ballot was run. Some groups like The Choice is Yours reported some breaches of the rules, but probably not enough to affect the overall result. Others like the Armenian Bar Association alleged widespread, flagrant cases of fraud.

Sakunts of the Helsinki Citizen’s Assembly was an election observer in the Tavush and Lori regions, and he said the lack of independent observers and opposition representatives made it hard to be confident that the polling was properly run.

The Organisation for Security and Cooperation in Europe, OSCE, which sends poll monitoring teams to its member states, has often come out with scathing findings after elections in former Soviet states. On this occasion, however, it was broadly positive.

“The February 18 presidential election was generally well-administered and was characterised by a respect for fundamental freedoms,” the OSCE mission’s preliminary report concluded, based on the findings of its 300 monitors. “Contestants were able to campaign freely. Media fulfilled their legal obligation to provide balanced coverage, and all contestants made use of their free airtime.”

The OSCE report did criticise some aspects of the poll, although it concluded that this election was an improvement on the 2008 polls which resulted in mass protests, clashes between police and opposition supporters, and almost a dozen deaths.

“A lack of impartiality of the public administration, misuse of administrative resources, and cases of pressure on voters were of concern. While election day was calm and orderly, it was marked by undue interference in the process, mainly by proxies representing the incumbent, and some serious violations were observed,” the report said.

NGO activists in Armenia who felt the OSCE had been far too soft on the authorities burst into a hall in the hotel where the mission was holding a press conference on February 19.

They included Lena Nazaryan, who works for Transparency International. She observed the election in the town of Artashat, where she says she saw people from Sargyan’s Republican Party working with local officials to fix the ballot. She says they behaved properly only when international observers were around.

Nazaryan and her fellow-activists tried to present their own findings to the journalists assembled for the OSCE event.

“There was a struggle because the organisers of the press conference tried to escort the activists out of the room. Nevertheless, we did manage to present our point of view,” she said.

Eduard Sharmazanov, spokesman for the Republican Party, said allegations of fraud were mere rumours and should not be taken seriously.

“Violations are not toys to be played with,” he warned. “No serious incident of electoral fraud sufficient to influence the course of vote was recorded. This election was the best in Armenia’s recent history.”

Although several foreign leaders, including key foreign ally President Vladimir Putin of Russia, congratulated Sargsyan on his re-election, Hovhannisyan said he was determined to keep fighting to have the results overturned.

Support for his cause still seems to be growing. Student groups in Yerevan announced they were going on strike.

However, it is not clear whether there is the momentum to create a mass movement behind Hovhannisyan.

“People gave their votes to Raffi not because they like him, but because they don’t like the authorities,” Alexander Iskandaryan, head of the Caucasus Institute, said. “The rallies Hovhannisyan is organising are unlikely to be sustained or to grow into mass action.”