After calling out supporters to demonstrate and then sending them home, Armenian National Congress has some ground to make up in order to remain serious political force.

After calling out supporters to demonstrate and then sending them home, Armenian National Congress has some ground to make up in order to remain serious political force. 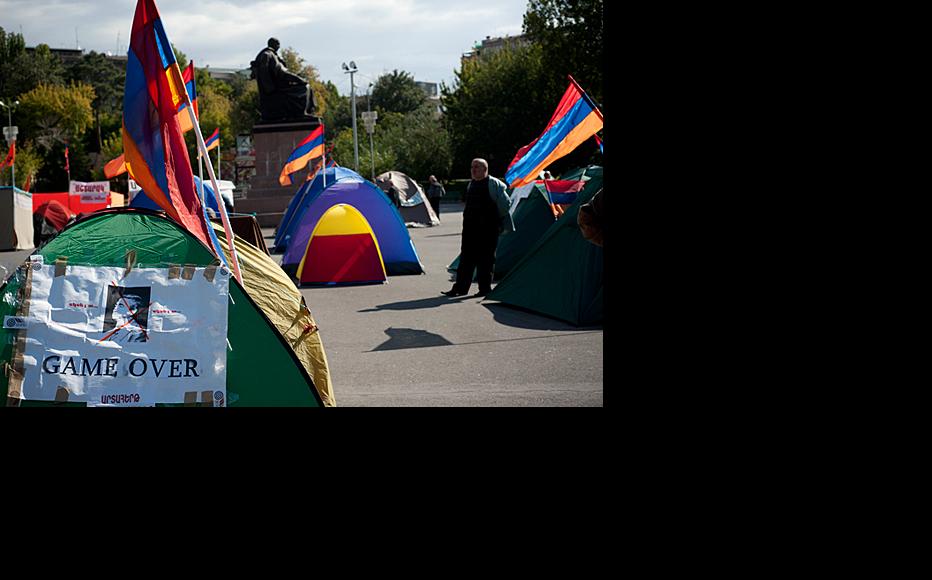 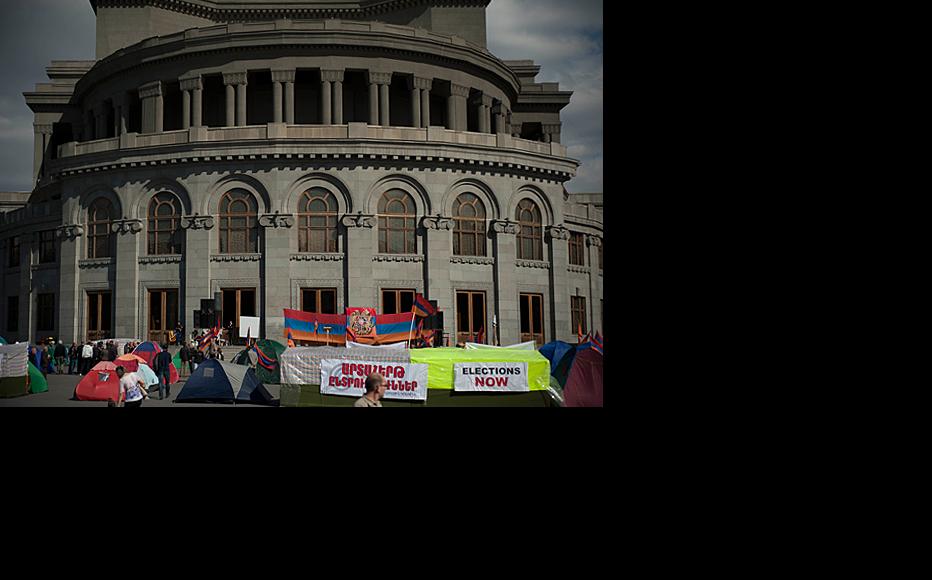 In the end, the opposition asked demonstrators to disperse without having achieved any of its aims. (Photo: Nazik Armenakyan) 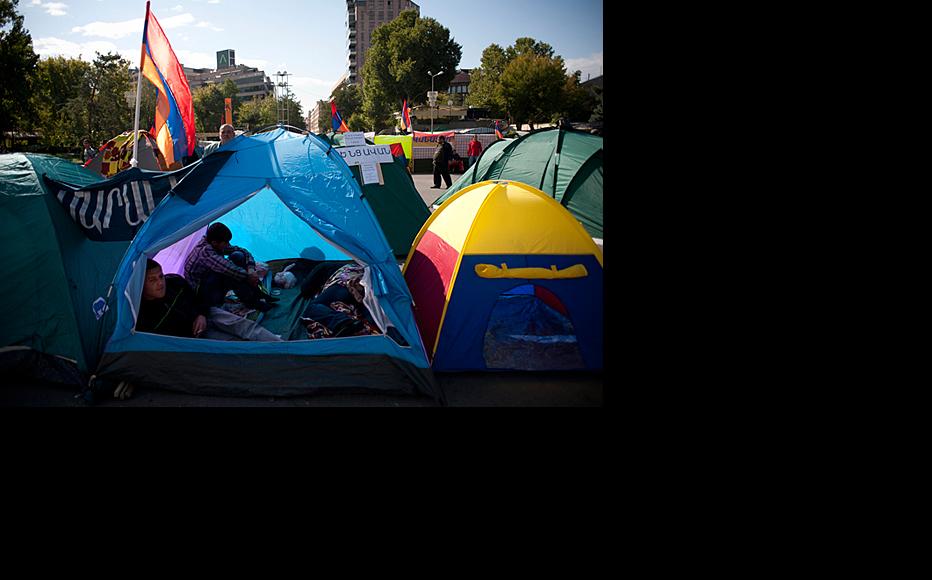 The decision disappointed supporters, and some said they wanted to carry on until their show of forced produced results. (Photo: Nazik Armenakyan) 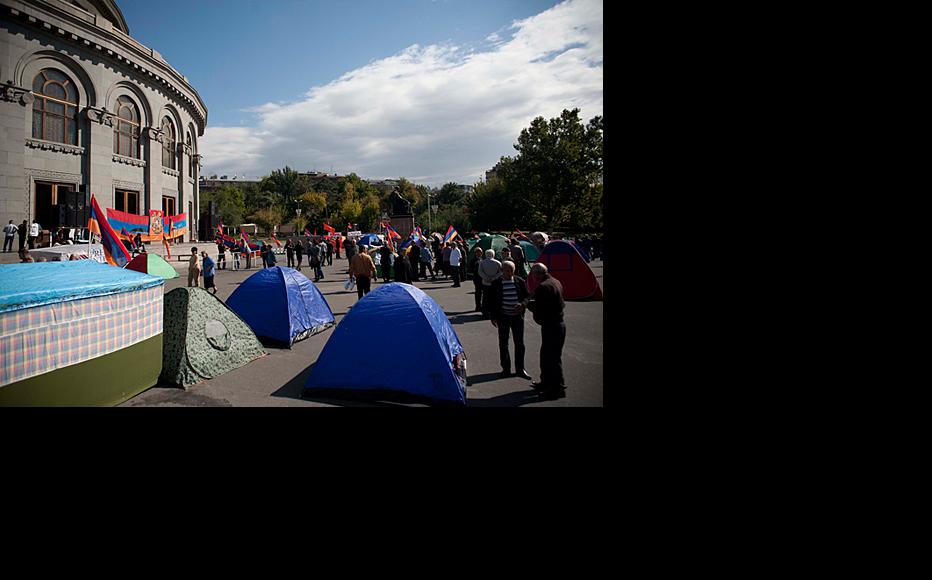 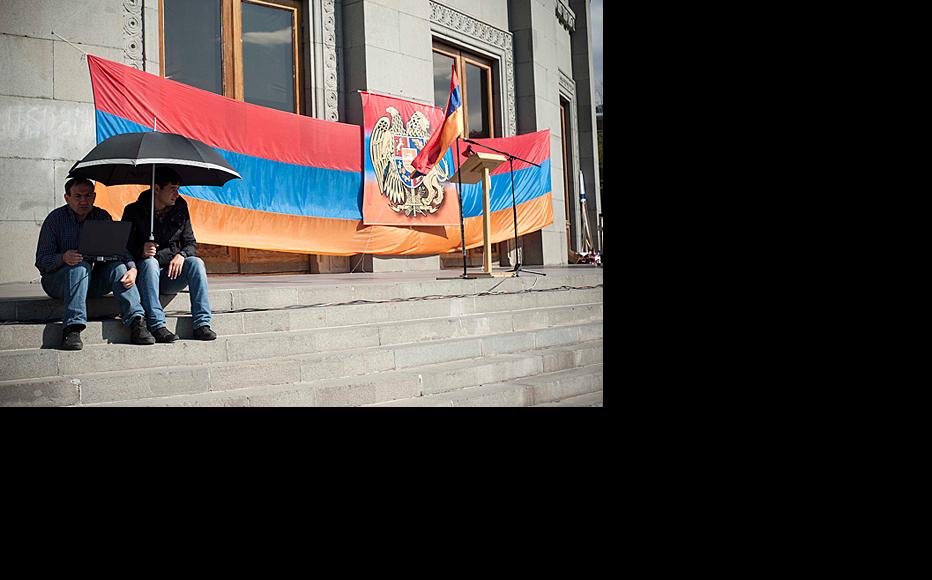 (Photo: Nazik Armenakyan)
The link has been copied

Armenia’s main opposition movement has suffered a damaging setback after public protests against the government came to nothing, analysts say.

The Armenian National Congress, ANC, was in negotiation with the government of President Serzh Sargsyan over the summer, hoping to win concessions and thus cement its position as a leading political force.

The two sides were trying to overcome a legacy of mistrust dating from the 2008 presidential election, after which ANC leader Levan Ter-Petrosyan, the losing candidate, declared the results fraudulent. The mass opposition protests that followed were broken up by police, resulting in around ten deaths.

This year’s attempt at conducting a dialogue ran into the ground in August, and the ANC called out its supporters for round-the-clock demonstrations. Experts said the opposition’s move back to street protests reflected pressures to begin campaigning for next year’s parliamentary election. (See Political Dialogue Breaks Down in Armenia for more on this.)

This time, all sides appeared keen to avoid the confrontations of 2008, and police did not intervene, although they regularly warned protesters that they were acting illegally.

The press nicknamed the protests “the Potty Revolution”, since public toilets and cafes near the square where they took place were closed for the duration. The deputy head of the president’s Republican Party, Galust Sahakyan, suggested that the ANC install its own public toilets or distribute chamber pots.

Eventually, Ter-Petrosyan himself asked the protesters to go home, saying he would call them back when they were needed.

As well as loss of face for the ANC as a major political actor in Armenia, the decision has also angered the rank-and-file supporters who came out in force.

“It was anger that drove me here,” Regina Temkina, a 50-year-old doctor, said. “I’m going to demand that the sit-down protest continues. It’s no life when you’re perpetually trampled underfoot and pretty much driven out by your own country.”

Analysts said Ter-Petrosyan risked alienating large chunks of his own support-base, and his tactics would make it difficult to call out demonstrators en masse in future.

“I think the ANC’s decision to hold round-the-clock protests was a strategic error,” Yervand Bozoyan, a political analyst with the Dialogue think-tank, said. “The decision didn’t result in anything. The ANC’s popularity has declined and it is no longer the same force that was able to dictate terms in 2008. It’s the authorities who can do that now.”

A resumption of dialogue between the government and the ANC now seems unlikely. The opposition suspended talks after a clash between police and ANC activists, one of whom, Tigran Arakelyan, was arrested, and the party has been demanding his release prior to restarting talks. The Republican Party, meanwhile, said the protests must end before negotiations could resume.

Ter-Petrosyan has said the ANC will accept any offer of talks, even though they have “ceased being relevant” and the party’s central demand is for Sargsyan to step down as president immediately.

David Harutiunyan, a member of parliament who led the dialogue process on the government side, said a resumption of talks would only happen if the opposition “sobered up and recognised political realities”.

“A dialogue must be based on the good will and intentions of both sides. I think that when the opposition recognises this, we will be able to speak to them again. Until that happens, it would be premature to talk about doing so,” Haratiunyan told RFE/RL radio.

Most analysts agree that the government has won this round, and predict that it will drive home its advantage.

“Sensing the ANC’s weakness, the authorities will definitely assume a tougher position,” Bozoyan said. “If the ANC then takes radical steps, it will become an even more marginal force.”

While the breakdown of the dialogue might point to a repetition of the clashes seen in 2008, Arman Melikyan, who stood for president that year and now works for the campaigning group Refugees and International Law, said neither government nor opposition would want that to happen. In any case, he said, the ANC now lacked the support to mount major street protests.

“The authorities understand that the ANC is not in a position to take resolute measures, and it’s clear that things won’t get as far as clashes. I don’t think these protests will produce any results,” he said, adding, “The ANC must continue with the dialogue.”

Naira Melkumyan is a freelance reporter in Armenia.