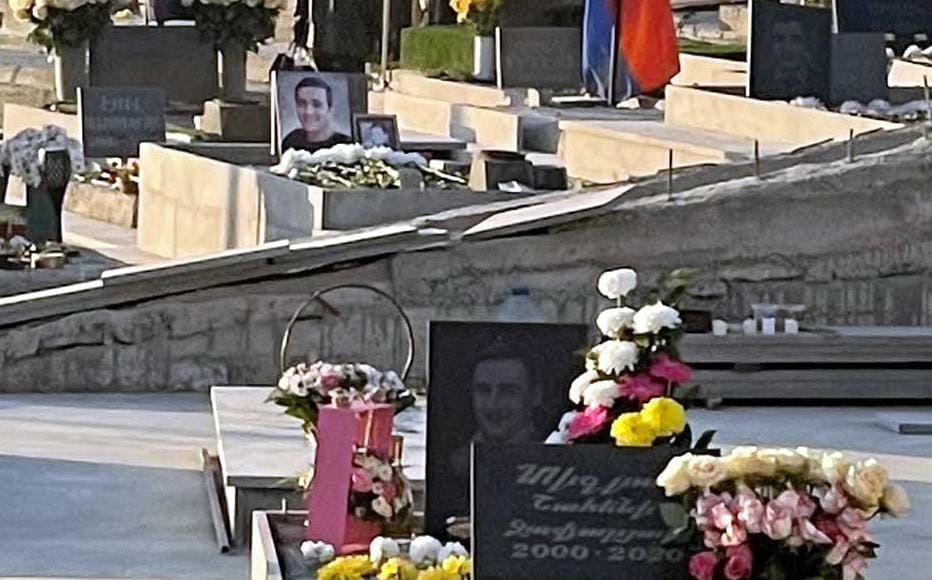 A military cemetery in Yerevan where Armenian soldier's are buried. © Armine Avetisyan
The link has been copied

Hasmik Qaryan is nine weeks pregnant with her second child. The 41-year-old doesn’t yet know the baby’s sex, but says that if she has a boy she will name him Samvel, after her only son who died in last year’s Nagorny Karabkah war.

“I always dreamed of having a second child, but it didn't work out,” she said. “I promised my son a sister or a brother.”

Qaryan became pregnant after six months of fertility treatment under a new Armenian initiative that provides free procedures for parents who lost children during the 2020 war. Some 150 people have already applied for the state-funded programme, resulting in more than 20 pregnancies, including Qaryan’s.

“My Samvel was in intelligence, he had been in the army for a year-and-a-half when the war broke out,” she said, adding that he had voluntarily returned from studying abroad so as to enlist for his national service.  “The last time I spoke to him was on September 26. After that, we had no contact with him.”

Hostilities between Armenia and Azerbaijan broke out last year on September 27. The war lasted 44 days, resulting in thousands of deaths on both sides.

Soon after the war ended, according to Eduard Hambardzumyan, president of the Armenian Association for Reproductive Medicine, the parents of dead soldiers began approaching his organisation.

“They wanted babies,” he continued. “These people have incredible strength of purpose. We realised that we should help them. Treatment and IVF are not cheap. One attempt costs 4,000 euros on average.”

"With the birth of a new baby, I will alleviate the longing for my fallen hero"

Prior to the war, the law provided for free medical care only to residents of border areas, military personnel and relation, people with disabilities and citizens receiving family benefits.

Now, state-funded fertility services have been allocated 917 million AMD (1.93 million US dollars) - three times more than in previous years - via five clinics to women up to 53 years of age. Prior to this, only women under the age of 42 were allowed access to fertility treatment in Armenia. However, as the age of women who lost sons during the war generally exceeded this, the ministry of health has changed the age limit.

Hambardzumyan said that Armenia was the first country in the world to implement such a programme.

“We take into account the woman’s health condition and contraindications, and then take the necessary steps. You know, most of the women who come to us dream of having a son, they say, ‘Doctor, please give us our son back.’”

Family psychologist Naira Kharatyan acknowledged that a woman who becomes pregnant again after losing a child may face psychological challenges.

“The victim cannot be identified as a newborn child; these are different people,” she continued, adding, “In this case, we do work so that the mother understands that a new person was born, and not the dead person.”

However, amid the ongoing trauma of last year’s defeat, there has been little discussion of the ethical implications of such a programme.

“We are not talking about one or two victims,” Kharatyan continued. “Thousands were killed, it was a national disaster. In this case, there was no alternative. A whole generation rose to defend their homeland. An entire generation needs to be rebuilt”.

If anything, she continued, the programme should be made available to all who wanted to participate.

“Armenia has a demographic problem. We are considered an aging nation,” Kharatyan concluded.

Gayane, not her real name, has been trying to get pregnant under the state-sponsored scheme for the last eight months but with no success. Her son was also killed during the last Karabakh war.

“Every month I waited for my period, trembling,” the 45-year-old said. “I didn’t want to see blood, I dreamed of getting pregnant, but it did not happen yet. It will, I know.”

Gayane has one other child, whom she says currently gives her the strength to carry on living. Come what may, she continued, she would have one more.

“At first my husband was against it, he didn’t even want to hear about the programme, but I persuaded him,” Gayane continued. “Our son must be reborn. It doesn't matter if we have a girl or a boy, I feel that with the birth of a new baby I will alleviate the longing for my fallen hero.