Municipal vote heralded as sign of great political change within the country.

Municipal vote heralded as sign of great political change within the country. 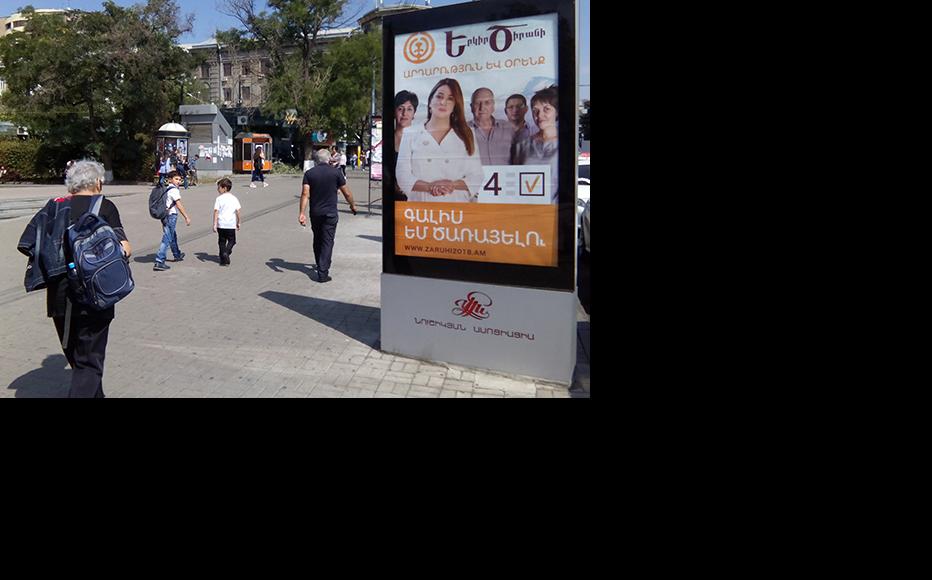 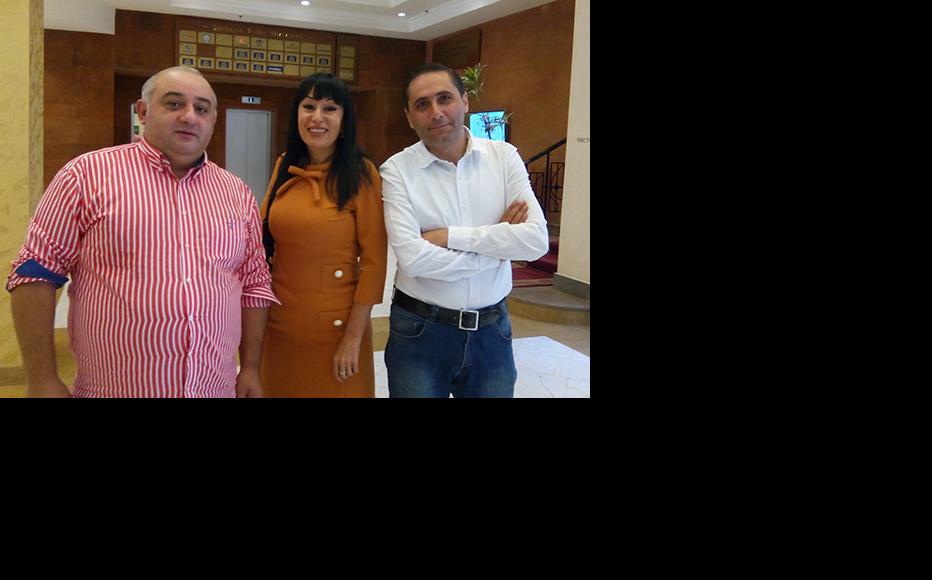 Naira Zohrabyan (middle) from Prosperous Armenia believes she is one of the country’s most influential politicians. (Photo: IWPR/Suren Deheryan) 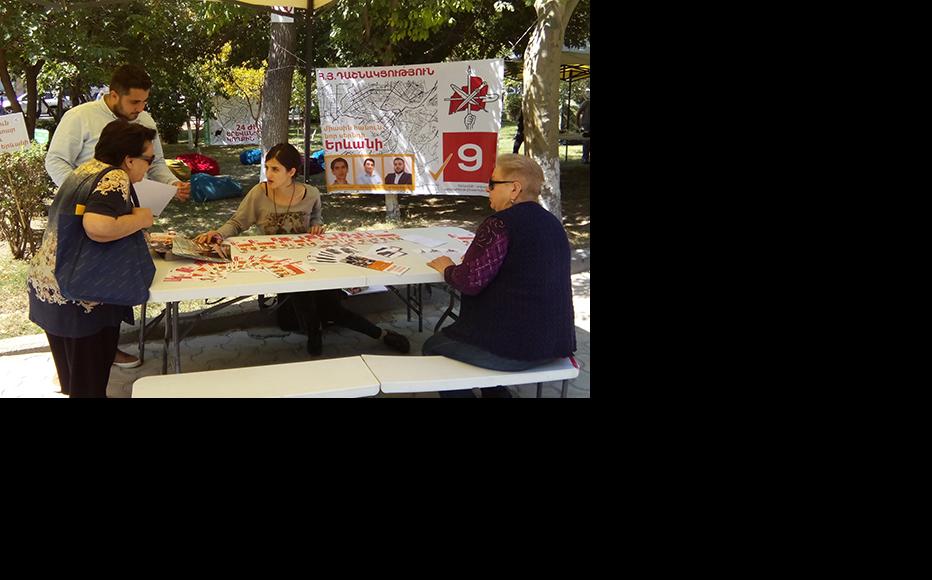 One of the pre-election campaigns of the Armenian Revolutionary Federation Party. (Photo: IWPR/Suren Deheryan) 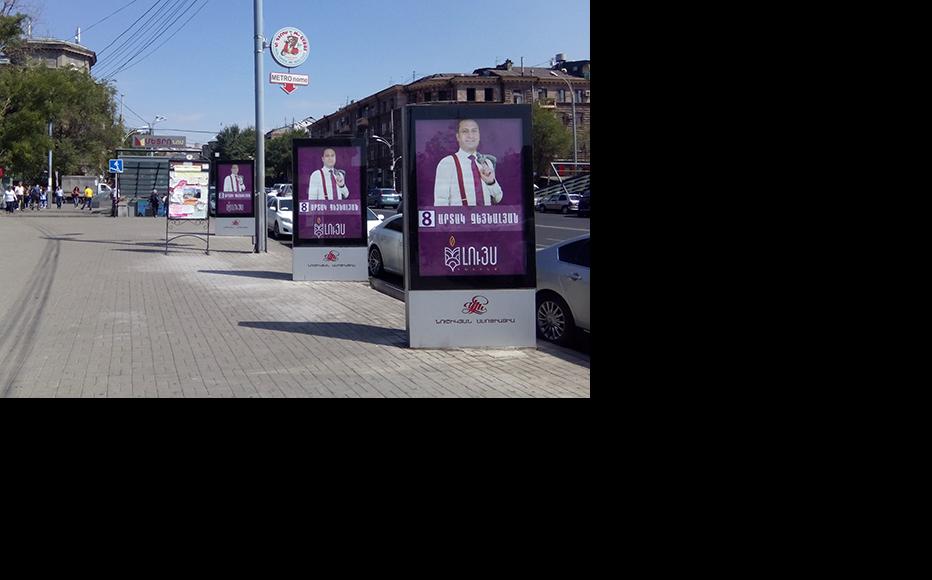 Posters of Artak Zeynalyan, the current justice minister who is running for the position of mayor as the head of the Luys Alliance. (Photo: IWPR/Suren Deheryan) 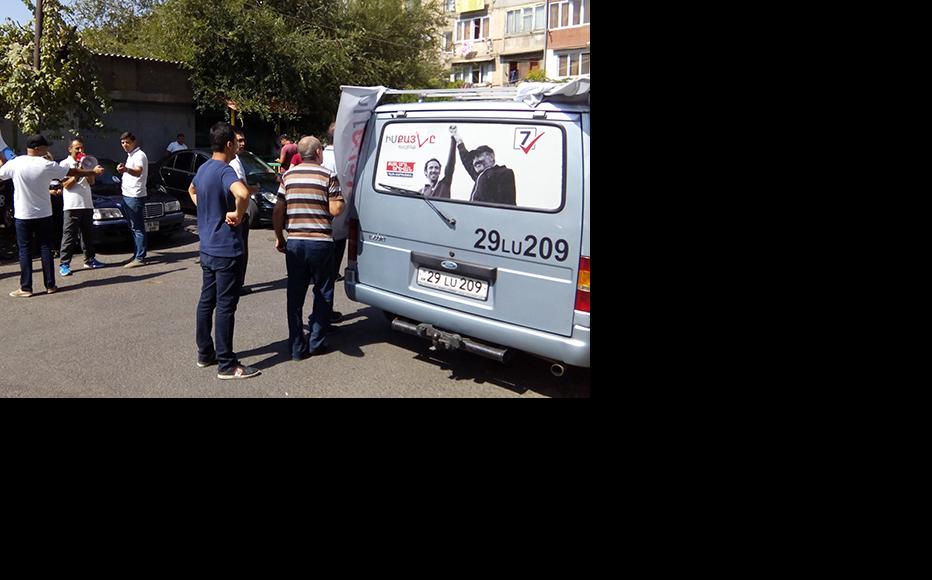 Members of My Step Alliance campaigning across Yerevan. (Photo: IWPR/Suren Deheryan)
The link has been copied

Yerevan is set to go to the polls to elect a new mayor in Armenia’s first major electoral test since a so-called velvet revolution toppled the government earlier this year.

There are 12 factions competing in the September 23 city council elections, spurred by the resignation of former mayor Taron Margaryan who had spent seven years as the Republican Party representative.

Prime minister Nikol Pashinyan, who led the anti-government protests and replaced former premier Serzh Sargsyan after he stepped down on April 23, has taken an active role in campaigning for his My Step Alliance list.

Political analyst Mikael Zolyan said that it was crucial for Pashinyan's party to do well in the election to prove that he actually did command public confidence.

"This will also end speculation from some members of the Republican Party that the revolution was a concession to an aggressive minority, whereas the silent majority continues to support the former authorities,"he said.

"It is a very important election for Armenia, as this is the first time when the citizens will make a choice after the revolution, and we hope this will be the first free election without rigging, bribery and other manipulations,” agreed Mikael Zolyan, a political analyst and associate professor at University of Languages and Social Sciences of Armenia, adding that it would be particularly significant as around 40 per cent of  Armenia’s population lived in Yerevan.

The mayor is elected through a secret ballot during the first session of the 65-member council. If one party recieves more than 50 per cent of council seats, the head of its list becomes mayor.

According to official data, 853,390 people are eligible to vote in these elections. There are 979 candidates nominated by 12 factions running for 65 seats on the council, three times more than ran in the 2017 race.

Levon Barseghyan, head of the Asparez Journalists' Club, believes that this renewed interest is a sign of great political change within Armenia.

“One of the reasons for such activity is that many parties that didn’t try to participate in previous elections now see a better opportunity,” he explained. “The other reason is that these elections are linked to the forthcoming parliamentary elections and there is great momentum for some political forces to use the council election campaigns to raise their ratings and public profile.”

The lists of three political parties are headed by women, which is rare in Armenia’s heavily male-dominated political culture.

Lawmaker Naira Zohrabyan, of the Prosperous Armenia Party, heads the party list for the Council of Elders and has her eyes set on the top job pf mayor.

"I think I am one of the most influential politicians in Armenia,” Zohrabyan, a former journalist, told IWPR. “I would like to see a lot of women leaders, because there are fewer conflicts in the countries which are led by women. In this regard, I welcome the participation of the other two women candidates and wish them success.”

Another major change is that, for the first time in 25 years, the Republican Party refused to run in the municipal elections.

Its previous candidate Margaryan was re-elected twice as mayor, most recently in 2017. However, he was accused of failing to live up to key pledges such as improving the city’s public transport system and prioritising environmental issues.

"It would have been tremendously risky for the Republican Party to participate,” Barseghyan said, arguing that for years the incumbents had been able to exploit administrative resources and vote manipulations to ensure their success.

This time, he anticipates a mostly fair and transparent fight, which risked drastically reducing their vote share, he continued. “A small percentage [of the vote] would become a timebomb for their participation in the upcoming parliamentary elections.”

The main opponent of Pashinyan's My Step Alliance is Prosperous Armenia, led by influential billionaire Gagik Tsarukyan. It has consistently been the second most powerful force after the Republican Party over the last decade and most often part of the ruling coalition.

Zolyan said that it was crucial to see how much support Prosperous Armenia, Luys Alliance and the Armenian Revolutionary Federation, known as Dashnaktsutyun, won in these elections.

Although they were part of the current government, he noted that these parties “joined the revolutionary wave at the very end when it was clear that a revolution would take place.

“These forces have their own interests in these elections, and probably Dashnaktsutyun and Prosperous Armenia will not remain in the coalition after success in the next parliamentary election.”

As far as Pashinyan’s party was concerned, Zolyan said that the municipal elections could make or break its future success.

"If  - unexpectedly  - the My Step Alliance get few votes, I don’t rule out that the current government coalition will collapse and Pashinyan will remain without his supporters in parliament,” Zolyan said. “But it is unlikely, since these forces have always backed the incumbent, and in my opinion the My Step Alliance will win a convincing victory, and these forces will forget the sharp rhetoric they used in their pre-election campaigns against each other and try to find a common language with Pashinyan's team.”

Suren Deheryan is the founder-editor of data-news website Ampop.am and a former IWPR Armenia editor.

Giving Voice, Driving Change - from the Borderland to the Steppes
Armenia
Elections
Connect with us