Armenia-Azerbaijan: Behind the Rhetoric

Armenia-Azerbaijan: Behind the Rhetoric 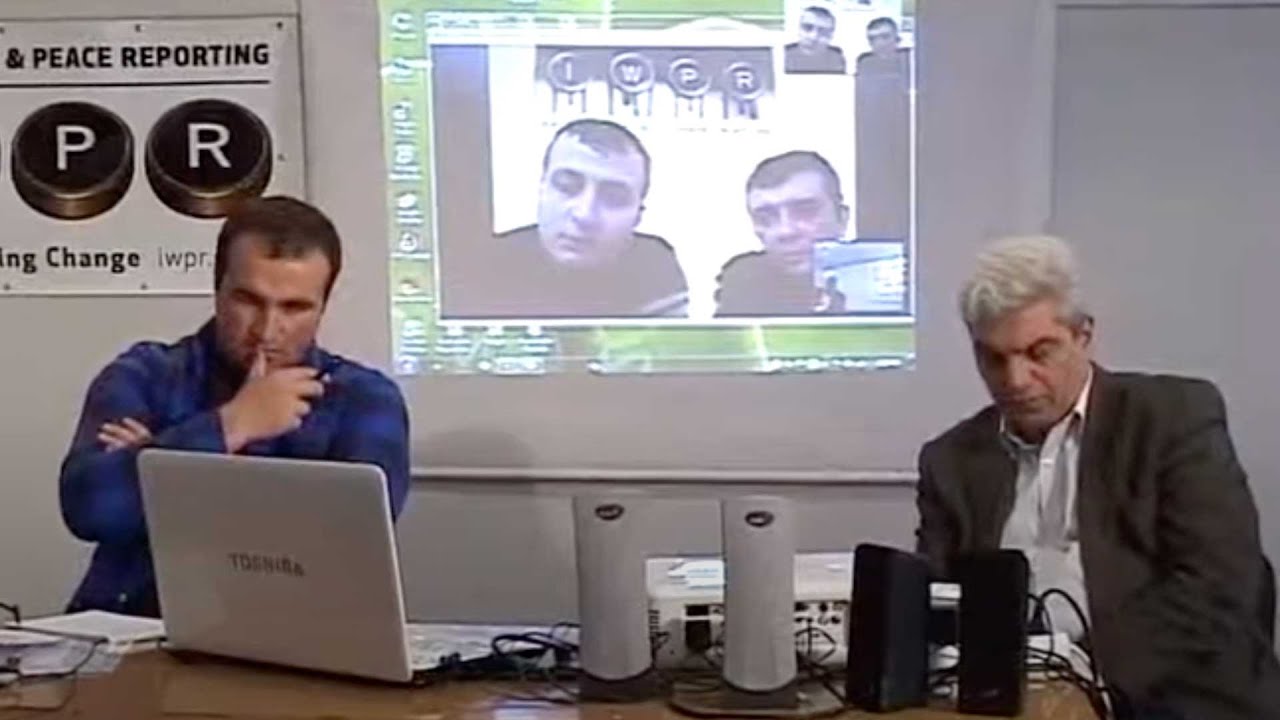 IWPR’s offices in Yerevan and Baku provided a rare opportunity for open Armenian-Azerbaijani debate when they hosted a joint discussion on the issues behind the hostile relationship between the two states.

Nijat Melikov, head of social affairs at the Zerkalo newspaper and spokesman for the REAL (Republican Alternative) movement, went on Skype to link up with IWPR’s Yerevan office, which hosted Stepan Grigoryan, a political analyst who heads the board of the Centre for Globalisation and Regional Cooperation,

Grigoryan and Melikov began by discussing the current state of negotiations on the Nagorny Karabakh conflict, which ended in 1994 with a truce but no political settlement. The protracted talks process is being mediated by the OSCE’s Minsk Group, chaired by Russia, the United States and France.

As well as diplomacy, Melikov and Stepanyan looked at the upsurge in frictions on the border between Armenia and Azerbaijan. Over many years, sporadic shooting incidents have generally been a feature of the “line of control” around Karabakh, but more recently there have been casualties further to the north, on the state border.

They also touched on the case of Ramil Safarov, an Azerbaijani soldier who killed an Armenian studying on the same course as him and was jailed in Hungary. Extradited to Azerbaijan last autumn, he was swiftly pardoned and accorded a hero’s welcome. (IWPR reported on the case here). The incident worsened the country’s already poor relationship with Armenia.

Following are excerpts from their remarks:

TALKS AT A STANDSTILL

Stepan Grigoryan: The reality is that there hasn’t been a meeting between the Armenian and Azerbaijan presidents in the last year. Even our foreign ministers haven’t meting recently. You’ll be aware that there was an attempt to get the foreign ministers to meet in Paris, but actually they met the co-chairs of the Minsk Group, but not each other. So the general picture seems to be that the talks process is at an impasse.

Recently the central issues of the Karabakh conflict have been evolving, expanding, and shifting to a different plane.

Previously we’d have been talking about ceasefire violations along the line of contact, shootings, snipers and people killed – it was largely about the line of contact between the Azerbaijan army and the Karabakh self-defence forces. Now we’re hearing more about what’s going on in Noyemberyan district [border area in Armenia], about Khojali [Azerbaijani civilians killed in 1992 during Karabakh conflict], about Sumgait [1988 killings of Armenian civilians in town near Baku], the Safarov case, and the current issue around Stepanakert airport [which Karabakh authorities plan to reopen; opposed by Baku]. In other words, we’re hearing more about these things than about anything directly connected with a resolution to the Karabakh conflict.

And the Madrid Principles [new framework for Karabakh talks devised in 2007] have been entirely forgotten over the last six months. As you’re aware this was a foundation document that didn’t offer a solution but was nevertheless something around which there were official negotiations, disputes, disagreement and agreement.

There have always been a lot of historical references – we Armenians and Azerbaijanis are very fond of citing history. But now everything is about history, genocides and so on.

I have to say openly that this creates a very difficult environment; it increases the level of pessimism. I recall being in Baku in December 2010 for a major conference on the European Union and the South Caucasus. There was a degree of optimism there.

Now its much harder to say anything optimistic. Terms like “compromise” and “concession” have almost become swearwords for the Armenian public – I don’t know about Azerbaijan – and I try to use them with care, or not at all.

Nijat Melikov: On the issue of why the talks have reached an impasse – that was only to be expected. It’s the continuation of a trend that’s been evolving over the last 20 years, in which there is some kind of talks process, there are proposals on the table, and there are some basic principles that at least make negotiations a possibility. But all this – international law, the various proposals and conditions – are stuck in a dead end.

In reality it isn’t about agreeing principles; often it’s about how ready the public is to accept any kind of compromise, and how it would receive them. Also, there’s the question of the quality of the political elites that have conducted these negotiations over all this time.

It isn’t clear how to take things forward, what process nto pursue in these negotiations. The OSCE Minsk Group and the countries involved in it [Russia, US and France] play a significant role but to many people that process has looked like a sham over many years. There’s long been a public perception that it’s a pretend process; that it’s talks about talks.

Grigoryan: That point about the quality of the elite is excellent…. I don’t just mean the political elite but all the rest, from the historians to the academics and technocrats. The logic they apply is most often drawn from the communist way of thinking – that everything should be resolved by force.

Unfortunately, the elite is being replaced only slowly, so many of the people at the top in this country and in yours belong to the old elites. They aren’t inclined to heed or react to changing realities.

On the positive side, there are the analysts and NGOs.

DOES ANYONE WANT PEACE?

Melikov: Sometimes one asks oneself who is actually interested in resolving the dispute. I mean the parties to the conflict, the international mediators and the regional geopolitical actors. How interested are Armenia, Azerbaijan or the Minsk Group members?

Grigoryan: I think it’s worth examining the role of external factors. Take Russia – it may be playing a positive role at the moment, in the sense that it doesn’t want war in the region. But at the same time, it doesn’t have a massive interest in seeing a rapid resolution to the Karabakh conflict. If that were to happen, both Armenia and Azerbaijan would become a lot more independent.And it’s obvious which way we’d turn. Our two nations are sensible and they want a decent life, and they’d achieve that by moving towards Europe.

I’ve been quite surprised by the American position recently. In 2005-06 you’ll recall that they wanted a rapid resolution. When you meet Americans these days and ask them what they see happening on Karabakh, they just look away. It’s very close to the Russian position.

Arshaluys Mgdesyan: I’d like to turn to a more down-to-earth question. In this specific sector, Noyemberyan and Tavush [Armenian districts adjoining Azerbaijan], there are clashes, shootings and fatalities. Who has an interest in that happening? Who benefits?

Melikov: First one should probably ask who is provoking these shooting incidents. The Azerbaijani side will say the Armenians are provoking it, while the Armenians will say no, it’s the Azerbaijanis. It all comes down to how possible it is to monitor the situation . and again we have to ask what the OSCE Minsk Group and other international organisations are doing. It all comes down to “who started it?”, every time.

Grigoryan: Why is this [tension] reflected in shootings in Noyemberyan, in other words on the border between Armenia and Azerbaijan rather than just around Karabakh?

But why is it happening there [on the Armenian-Azerbaijani border]? I don’t have an answer. I honestly don’t understand how the Noyemberyan clashes benefit either us or the Azerbaijanis.

Grigoryan: There’s a stereotypical and fairly widespread view that the status quo is to Armenia’s advantage but not to Azerbaijan’s. So the Azerbaijani government launches initiatives in international organisations, or tries to move discussion of the Karabakh issue beyond the Minsk Group to other institutions like the United Nations.

I think this is true in a sense. It seems to me that Azerbaijan fears that the Minsk Group process isn’t working, so it constantly tries to raise the Karabakh issue with other institutions, the UN or the Organisation of the Islamic Conference.

There’s also a view that for the same reason, Azerbaijan refuses to withdraw its snipers from the line of control.

Moroever, in Armenia there’s a very strong stereotypical view that the status quo is to our advantage. I take a different view. But I often encounter this view when people ask me why I’m proposing some initiative to make rapid progress or offer compromises, when they believe we should just wait and see what happens.

I understand the logic of the Azerbaijani position. It’s that if everything carries on by the force of inertia, everyone will forget about the Karabakh conflict, especially in the context of events in Syria and Egypt – regional states with immense influence. So there’s a concern to keep raising the issue and keep on reminding people about it.

The dominant logic in Armenia, and one that I think has grown even stronger, is equally understandable – why take sudden steps? Let’s just wait and see.

Yet I don’t believe it’s in our strategic interests or in those of Azerbaijan and Georgia to leave this issue unresolved.

Melikov: Certain sections of the Azerbaijani public often take the view that the authorities use the Karabakh issue as a political and moral instrument for drumming up domestic political support. They suspect that efforts to raise the issue in the international arena are a PR exercise to cover up domestic problems with human rights and freedom of speech.

Grigoryan: What’s interesting is that the opposition in Armenia takes a harder line on Karabakh than the government does. At least publicly, the government says it’s prepared to engage in negotiations. The opposition comes along, in the shape of its main figure at the moment, Raffi Hovhannesyan, and says no, we just have to recognise Karabakh as independent.

Grigoryan: I stopped using the word “compromise” after the Safarov case. I don’t want to go into it or rake it up again. It’s a really sad story.

Afterwards, it really became hard to suggest to Armenians [in Karabakh] that they might agree to live under Azerbaijani rule. That’s a very hard argument to make, believe me.

There are some events that qualitatively change the situation. I can’t think of another event that has cause so much stress in our society as the Safarov case. You understand the gist of it – “if you kill an Armenian you’re a hero”, crudely speaking. At one stroke, it undermined anyone inclined towards democracy and compromise.

Melikov: I wouldn’t say society was totally divided on the issue. Of course most people saw him if not as a hero, then as a positive figure. But among the more active section of society [NGOs] it was hotly disputed and there wasn’t a homogenous view….Everyone had their own opinion. There wasn’t a blanket view that Safarov was a national hero for Azerbaijan.

Melikov: The public must come to the view that in order to resolve the Karabakh conflict, war is not a necessary evil; and that peace is the essential good for which we must strive.

The argument needs to be made that Azerbaijan and Armenia do not need to have conflicting interests in any solution to the Karabakh problem . Of course that will be difficult to achieve, since it will initially appear that their interests have nothing in common and are completely opposed.

Grigoryan: What might we consider doing? One idea that we’ve discussed several times, as have some of our Azerbaijan partners is to jointly call for the snipers to be withdrawn, without going on about who’s to blame.

As public figures, we would propose withdrawing the snipers. It would reduce the number of fatalities. Every death is a step further away from a solution.