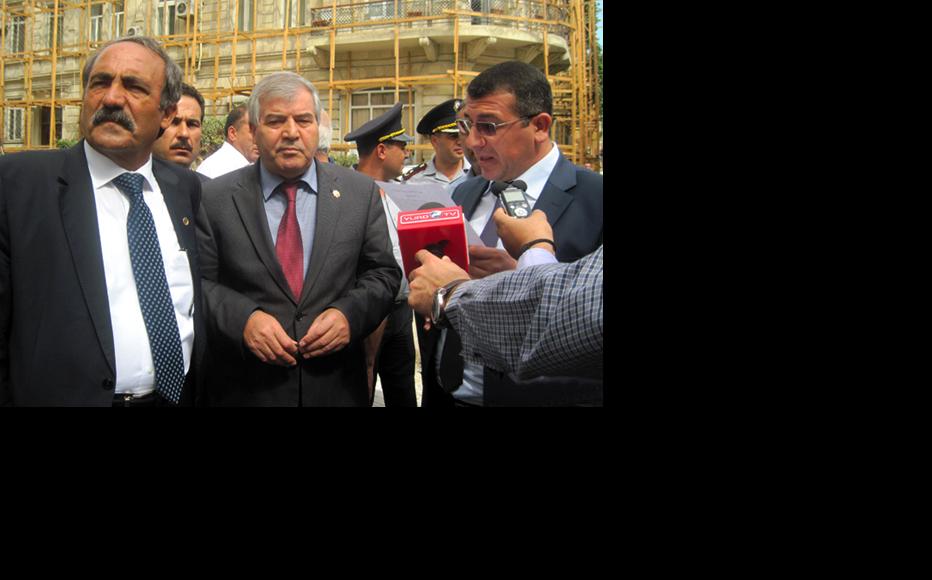 Sabir Rustamkhanli (centre), head of the World Congress of Azerbaijanis, during the protests outside the Iranian embassy. (Photo: Sabuhi Mammadli) 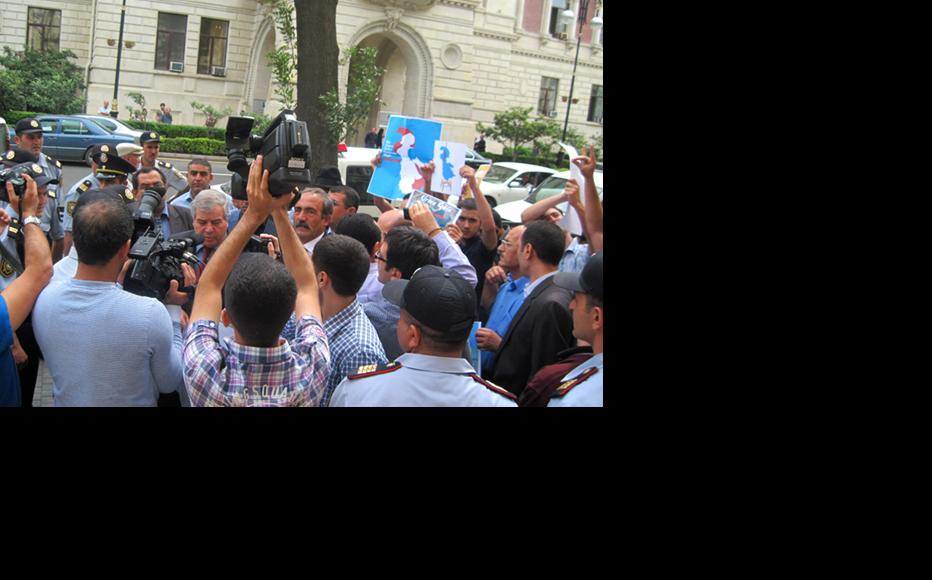 Azerbaijani nationalists protesting at Tehran&amp;amp;#039;s embassy in Baku focused as much on their ethnic kin in Iran as on the environmental protests going on there. (Photo: Sabuhi Mammadli)
The link has been copied

Protests in northwest Iran demanding action to stop a major lake drying up have been echoed across the border in Azerbaijan, where a demonstration took place outside Tehran’s embassy in the capital Baku.

The hundreds of people who took part in the Baku protest, which was broken up by police, went beyond environmental concerns about Lake Urmia and expressed support for Iran’s large ethnic Azerbaijani minority.

Chants of “Unite Azerbaijan with its capital in Tabriz” were heard – a reference to nationalist aspirations for their former Soviet republic to one day join up with ethnic Azerbaijan-majority regions of northwest Iran..

“Our demands are not political,” Seymur Hasanli, head of the youth section of the World Congress of Azerbaijanis, insisted. “We just think it’s our duty to support our Azeri brothers in Iranian Azerbaijan.”

Lake Urmia, located between Iran’s East and West Azerbaijan provinces, is the largest lake in the Middle East, but its area has shrunk drastically through damming, overuse of water, drought, and evaporation. Because it is a saltwater lake, the minerals deposits left as the lake’s edges recede pose potential health hazards.

Javad Jahangirli, an Iranian parliamentarian from the region, told the BBC that if the lake were to disappear, the salt-covered bed could create an environmental catastrophe affecting up to 14 million people.

Protests in August in the cities of Tabriz and Urmia, which sit on either side of the lake, met with the usual heavy-handed police response.

“Instead of listening to people’s demands, the Iranian authorities launched mass arrests,” Vahid Garadagli, spokesman for the Baku-based Association for the Defence of Azeri Political Prisoners in Iran, said. “On September 4 alone, more than 200 protesters were arrested in Urmia – both in the street during the protest, and in their homes. It’s very hard to put a figure to the total numbers arrested, but it’s already in the thousands.”

The environmental issues are real enough for people living over the border in Azerbaijan, who are well aware of what happened to the Aral Sea in Central Asia. Excess use of river waters in the Soviet era reduced the sea’s area, and harmful dust and salt residues on the exposed Aral seabed were dispersed over surrounding areas of Uzbekistan and Kazakstan.

In Azerbaijan, however, much of the focus has been on minority politics in Iran.

“The Iranian authorities’ indifference [to the lake] shows their antipathy to us Azerbaijanis,” Sabir Rustamkhanli, a member of parliament who heads the World Congress of Azerbaijanis, said. “If Lake Urmia, one of the world’s saltiest lakes, dries up, then all of southern Azerbaijan [in Iran] will be affected by salinity. People will lose not just their homes but their livelihoods. Just think of the threat our brothers face from the Iranian authorities.”

The World Congress has promised to keep up the pressure on Tehran.

“Despite the brutal police response and the dispersal of the protesters, we are going to continue protesting until the problem is resolved,” Hasanli said. “Following our protests, the government closed the road outside the Iranian embassy, supposedly for repairs. But that isn’t going to stop us – we will find ways and places to show our support for our kin.”

The nationalists have already shown some ingenuity in voicing their views. At a football match between Kazakstan and Azerbaijan on September 6, a group of fans chanted: “Azerbaijan is our life, Urmia is our blood”, and “Persians, Russians and Armenians are the [Azerbaijani] Turks’ enemies”.

The police moved in, arresting 14 fans and dispersing the rest.

The grassroots protests leave the Azerbaijani authorities in a difficult position, given that relations with Tehran have never been easy.

Mubariz Gurbanli, a parliamentarian from the ruling Yeni Azerbaijan party, called for moderation.

“Of course we understand that Azerbaijanis in the cities of Tabriz and Urmia are justified in protesting against the evaporation of the lake. We cannot be indifferent to that. But they are citizens of Iran, and we can’t interfere in the internal affairs of another country," he said. "All the same, no amount of force and violence can stop people standing up for their rights. I am certain that sooner or later, the Iranian authorities will come to understand this.”

Iran, Azerbaijan
Protests
Connect with us