Ma’dan tribal leaders say they will resist impact of oil boom and urbanisation on their traditional culture.

Ma’dan tribal leaders say they will resist impact of oil boom and urbanisation on their traditional culture. 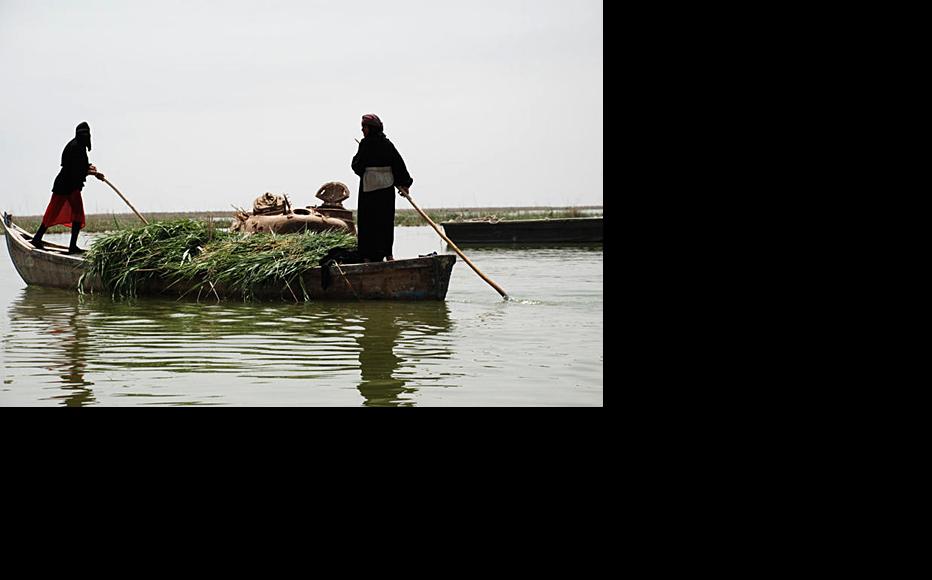 Elders of the Ma'dan tribes - otherwise known as Marsh Arabs - of Iraq's southern Basra province insist they won’t relocate or alter their millennia-old way of life even as plans proceed to industrialise their oil-rich ancestral wetlands.

Former Iraqi leader Saddam Hussein sought to destroy Ma’dan society by draining the vast marshes which sustained them. Now, with many members of the younger generation increasingly urbanised, tribal leaders see oil production as the coming threat to their traditional culture.

In recent weeks, Iraq has upgraded its estimated oil reserves by 24 per cent to 143.1 billion barrels and announced a goal of producing 12 million barrels per day by 2016. Although industry experts have been sceptical of the production target, it’s clear that Basra, the country’s oil-production and export centre, can expect further exploration, extraction and infrastructure building.

There is already talk among Basra’s estimated 40,000 remaining Ma’dan of mass evictions and environmental problems. Some tribal elders see the onset of oil production as a threat to their life and livelihoods, despite the promise of jobs and possible financial compensation.

Sheikh Wasmi Hallob, 68, the head of the Abra tribe, told IWPR that an oil company had already approached him about relocation. Hallob declined to disclose the name of the company or any terms of resettlement, but said he had refused. Hallob said there are already 18 oil fields on his tribe’s land.

“We do not want anything from the government; no reparations, no investment, no companies. All we need is that the government and companies let us live here peacefully,” said the tribal leader, who claims he can trace his family’s roots in the area back for 700 years.

“Where can we go? We don’t have any way to make a living except for our buffalos,” he continued. “In Saddam’s era we were targets of military attacks and attempts to drain the marshes. Now, after all that, we could be forced to move away.”

Anthropologists estimate that the Ma’dan have lived in Basra’s once-fertile marshlands between the Tigris and Euphrates rivers for some 5,000 years. Some historians believe the Ma’dan are the last remaining descendants of the long-extinct Sumerian culture which vanished from the region in around 1800 BC.

Living in secluded villages, sometimes situated atop man-made islands of reed matting and mud, the self-sufficient Ma’dan lifestyle, along with strong familial and tribal bonds, allowed them to withstand pressures from the outside world.

“Iraqis call those who live in the marshes Ma’dan. In the past, they were people who lived outside of civilization,” Mohammed Atwan, a professor at Basra University, said.

“The Ma’dan depend primarily on [water] buffalo, and they farm, fish and hunt. They also weave the reeds in the marshes into products they can sell or trade.”

Atwan also said that the fact that the term Ma’dan can be used as an insult is evidence of the history of discrimination.

Sabri Saddam, the leader of the al-Bedhan tribe, has a different interpretation of the name Ma’dan. He said it comes from the Arabic word for opponent and suggests the tribes’ fierce independence.

“We have been opposed to central authority since the times when we fought the Ottoman empire,” he said. “We refused to put their symbols on our tribal flags. We are still the same way. You will not find many of our sons joining the Iraqi military.”

This resistance to authority triggered Saddam regime crackdowns on the Ma’dan. Uprisings in Basra were crushed after the 1991 Gulf War and the government embarked on massive drainage and dam projects, ultimately drying out some 90 per cent of Iraq’s 20,000 square kilometres of marshland. The United Nations Environmental Programme called the draining campaign “one of the world’s greatest environmental disasters”.

"We were in heaven until the former regime dried the marshes,” tribal leader Hallob said. “The marshes are our home, our source of life. Saddam dried the marshes twice; once in the 1970s to look for oil and again in the 1990s to chase his opponents. We were hurt a lot. We migrated from our homes and many of us went to cities to keep alive.”

Even as progress has been made since 2003 in restoring the wetlands to some 37 per cent of its original size, concern over the impact of the oil industry, as well as integration into city life, looms ever larger for Ma’dan elders.

“We have lived in this area for many generations, but you can see now that things are changing,” said Hussein Mohammed Mubarak, an 83-year-old tribal leader in the Karma area. “In the past, the women would sell milk and cream from the buffalos and the men would fish and hunt. But now many of our sons work in shops in the city. Some are even employed by the government. The head of the Basra traffic police is Ma’dan.”

“It has also been taken into consideration that a priority is given to hiring the local Ma’dan people in security jobs and other positions that don’t require specialised skills.”

Hashim Laibi, a member of the Basra provincial council, pointed out that increasing numbers of young Ma’dan men have already abandoned traditional ways to seek work in nearby cities.

“In spite of plans by the government to revive the marshes over the last seven years, including building schools, clinics, housing compounds, the Ma’dan can’t ignore the opportunities in the city. They have been saturated with city values,” Laibi said.

For a younger generation, reliance on the city is now a way of life.

“Ever since I was 15, I have woken up every morning and gone to the city,” Salema Abed, 30, said. “My father is an old man and my mother milks the buffalos and makes cream. I must sell the cream in the city because the customers are there. This is how we stay alive.”

But elders are still adamant that their traditions will remain unchanged.

“We laugh at city people who get their salaries from government, while we get whatever we want and sell them our remains,” Hallob said. “In the past, if a rich city person had asked me to change places with him, I would never agree. We are proud that we are Ma’dan.”

Ali Abu Iraq is an IWPR-trained journalist in Basra.