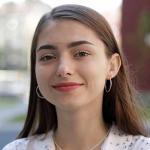 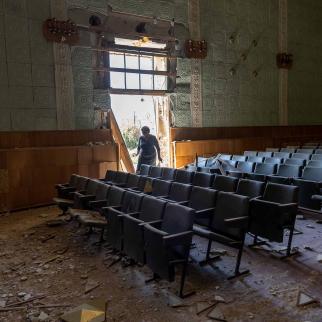 Village leader Dina, 62 enters a bomb-damaged auditorium in a town which was partially occupied by Russian forces until recently in Kherson Oblast on May 08, 2022 in Zagradivka, Ukraine. Most of the Kherson Oblast region fell to Russia shortly after the Feb. 24 invasion, as Russia sought to create an overland corridor from Crimea to separatist-held areas in the east. © John Moore/Getty Images 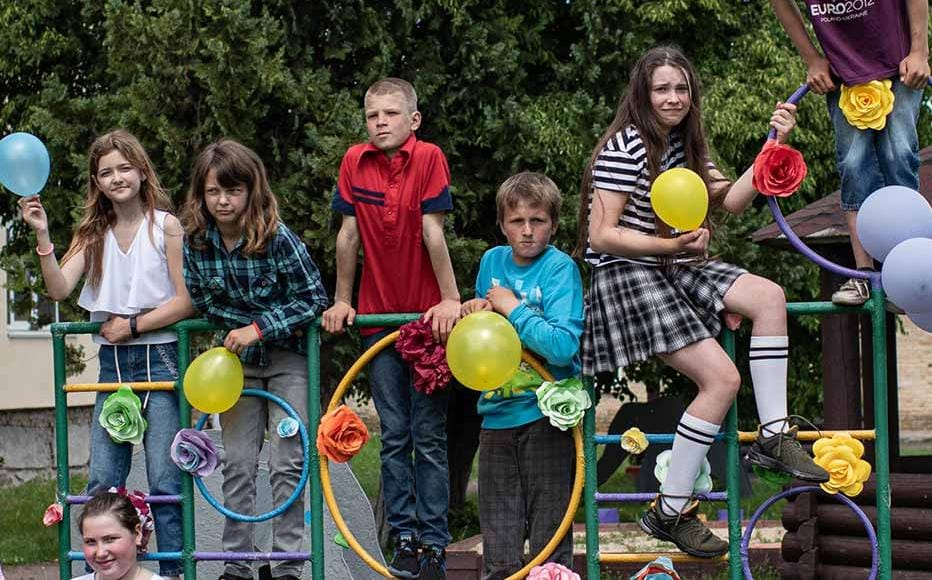 School students pose for a portrait with blue and yellow balloons in the colours of the Ukrainian national flag during Childrens Day activities on June 1, 2022 in Rusaniv, Ukraine. © Alexey Furman/Getty Images
The link has been copied

Education has emerged as a key factor in Russia’s full-scale invasion of Ukraine, experts warn, with a key test due when the country’s new school year starts on September 1.

“The issue of education is fundamental for our country,” said Ukrainian lawmaker Inna Sovsun, a former deputy minister of education.

“The first thing the Russian army does after it occupies Ukrainian territory is enter schools,” she continued. “Russians burn textbooks and try to persuade teachers to cooperate because they understand that the occupation of education will guarantee the loyalty of the population to the invading so-called authorities in the future.”

Meanwhile, schools in Ukrainian-controlled parts of the country are under attack. So far, more than 2,000 educational institutions have been damaged in Russian strikes, with 261 buildings completely destroyed.

Schools still in operation will be able to choose the format of studying for the new academic year – whether online, in person or hybrid - depending on the availability of shelters and the security situation in the region.

“The Ukrainian system of educational institutions was built in peacetime, without the expectation of a full-scale war,” education ombudsman Sergii Gorbachov told IWPR. “It takes time and money to set up bomb shelters. The schools are currently undergoing a security audit. That is, local authorities create groups of rescuers, educators, police and communal services, who inspect the premises of the educational institution and conclude whether conditions are safe for studying, as well as provide recommendations on the necessary arrangement for bomb shelters.

“Only after such a security audit is the school able to determine in what format - online or in person - to teach children.”

According to the ministry of internal affairs, about 41 per cent of Ukrainian educational institutions are fully equipped with bomb shelters. However, Sovsun noted that this did not include an assessment of how appropriate provision was in terms of size, availability of food, water, the internet or toilet facilities.

In the areas occupied by Russia, conditions are dire.

“Due to the constant shelling, electricity often goes off in villages and towns. As soon as the power supply is restored, we continue teaching lessons,” said the principal of a village in the southern region of Kherson region, who asked to remain anonymous for security reasons.

In addition, the Russian de facto administrations have been quick to change the curriculum in the occupied territories, first targeting Ukrainian language, literature and history. Emblems such as Ukrainian flags, coats of arms and signs are removed from buildings, and Ukrainian music banned.

Some local education officials have been recruited from the ranks of pro-Russian collaborators. Others plan to continue teaching children from the legitimate national curriculum, although communication with the ministry of education and science is hard because Russia blocks mobile network operators and the internet.

“If there is no internet, we are ready to teach children right in our own homes. But the most important thing for us is not to lose children's and teachers' lives,” the principal concluded.

Education professionals stress that the conflict cannot be allowed to derail ongoing reforms in the sector, which argue are vital for Ukraine’s future development, not least in raising a generation of children with the critical thinking skills needed to challenge Russian disinformation.

"The main thing is for studying to continue.”

Since 2017, the New Ukrainian School project has been ongoing, which focuses on supporting students to not just acquire knowledge, but also to learn to apply it in practice.

“Over the years, the reform has shown qualitative results, but first coronavirus and now the full-scale invasion of Russia allow opponents of change to manipulate and criticise The New Ukrainian School,” said Petushkova.

“For the primary school, an in-person learning format is absolutely necessary: contact with the teacher, socialisation, adaptation to school life. Therefore, it is necessary to start the educational process live, wherever it is possible in the security sense,” Gorbachov added.

In addition to the students currently in Ukraine, there are millions who have left with their parents and plan to start their studies in other countries.

“There are fears that children will see other schools, a different attitude to themselves, better textbooks, and will not want to return to unreformed Ukrainian educational institutions,” Sovsun continued. “Thus, we can lose a whole generation of Ukrainians if we do not, despite everything, take decisive steps to reform education. After all, now in Ukraine, there is even no qualitative monitoring of educational losses caused by coronavirus and full-scale war.”

“Russians are deliberately destroying the Ukrainian education system because they understand that fighting for the minds of future generations is key,” Sovsun said. “The Kremlin is working with this both in Ukraine and around the world.”

Oleksandr Udovytskyi is from Kharkiv, a city in east Ukraine just 50 kilometres from the Russian border. Before the full-scale invasion, 1.4 million people lived here, a number which has dwindled to no more than 800,000.

The 17-year-old is due to start 11th grade on September 1, but this will be online as the school was badly damaged in shelling by the Russian army. Since February 24, Russia has shelled Kharkiv more than 5,000 times, according to local police.

“My school management has already procured and is installing new windows to allow us to resume in-person learning when possible,” he said. “Teachers and administration are being fully responsible for the organisation of the educational process, both during the coronavirus and now. We had evacuation drills during the air raid sirens even before the full-scale war. Of course, the in-person format is better, but the main thing is for studying to continue.”

Despite the full-scale war, the student does not plan to leave Ukraine. Udovytskyi has already chosen a university in Kharkiv to apply for when he graduates.

IWPR approached UNICEF for comment, but the organisation did not respond by time of publication