Farming has been devastated by the ongoing conflict.

Farming has been devastated by the ongoing conflict. 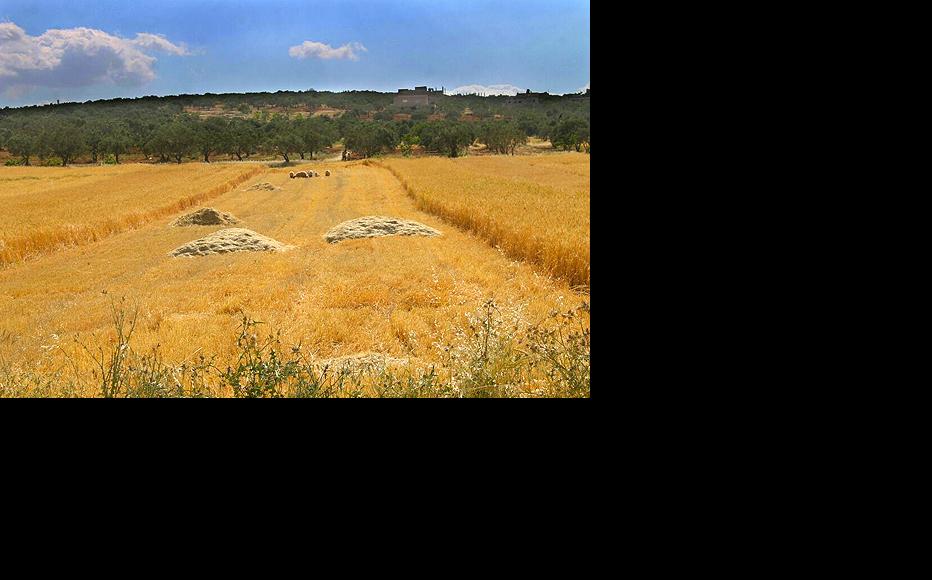 A wheat field and olive grove in Kfar Nabel. (Photo: Hadia Mansour)
The link has been copied

Abu Amer’s once-flourishing farm in rural Idlib is now in a terrible state.

“Agriculture has become one of the most difficult and most demanding jobs these days. It is extremely difficult to secure the most basic requirements for farming, including water,” the 42-year old told Damascus Bureau.

Although Abu Amer has an artesian well and water pump on his land, he cannot afford the high fuel prices to run it, or to pay for maintenance and repair costs.

In the past, he was able to irrigate his fields all year round, producing winter and summer crops he sold at a great profit.

Now Abu Amer must rely on seasonal rainfall which generates a poor and unreliable harvest.

Abu Amer is one of hundreds of farmers in Idlib’s countryside – a fertile area that used to be nicknamed the Green Governorate – whose livelihood has been hurt by the ongoing war.

The astronomical prices of crops has also left consumers at a great disadvantage.

Umm Alaa, a resident of Kfar Nabel city, attributes these high prices to the greed of both producers and sellers.

“They complain about the rise and fall in fuel prices, but they are making huge profits,” the 45 year-old said.

“For example, let’s say it costs 100 Syrian pounds to produce one kilogramme of tomatoes. Farmers sell them for 200 pounds, and traders then sell them for 300 pounds.

Umm Alaa said that both parties should show some consideration to the present harsh reality in which many people live.

Farmers say that the hardest hit crop in the liberated areas is wheat.

Locally produced wheat can no longer meet demand, which has led to bread shortages and concurrent price hikes.

One wheat farmer, Ahmad al-Omar, told Damascus Bureau that cultivation had diminished due to the steep price of fuel and the lack of fertilisers.

According to the 38 year-old, after the government bombed Idlib’s animal feed and fertiliser factories, these products could only be found in regime-held areas. That meant they were impossible for farmers like him to obtain.

“Post-harvest handling of crops is also a main challenge for us,” al-Omar added.

“If we transport it to regime-held areas, we run the risk of having it confiscated at checkpoints, which has happened to many farmers.

“If we do manage to get it across the checkpoints, the regime will have the upper hand and will buy it for very cheap prices because it comes from liberated areas,” he said.

This has forced many farmers to sell their produce cheaply on the black market to traders or mill-owners.

Farmers have even resorted to offering their land to investors, who pay them a fixed salary for irrigating, harvesting and selling the produce.

One investor named Salem told Damascus Bureau that sometimes even he made a loss.

“Losses are inevitable when the price of diesel doubles or quadruples as compared to its price when the deal was first struck with the landowner,” the 34 year-old said.

Trader Abu Mohammad explained the reasons for the dramatic fluctuation in fuel prices.

“Sometimes, Islamic State (IS) militants block the roads that fuel tanks take to reach opposition-held areas. Other times, the Kurdish Democratic Union Party (PYD) cuts it off,” the 41 year-old said.

“This can happen due to a whim or a disagreement amongst factions. Ultimately, we are at war, and nothing is normal,” he said.

Olive production, once a crop Idlib’s countryside used to be famous for, has also declined significantly.

The UN Food and Agriculture Organisation (FAO) has estimated a 40 per cent drop in olive production since the beginning of the revolution.

“The agriculture sector in the Idlb’s countryside has been hugely affected,” said Abdo Humaida, head of Idlib’s chamber of agriculture.

“The increase in fuel prices has led some people to cut down olive, fig and cherry trees for firewood, to keep their families warm in winter. This practice undoubtedly threatens the destruction of vegetation in the area.”

Humaida also blamed the government, accusing it of destroying olive groves stretching across hundreds of kilometres of land south of Maarat al-Numan and at the southern entrance to Idlib.

Some organisations operating in northern Syria have implemented projects to ward off an agricultural crisis they fear could lead to mass starvation.

The Syrian Business Forum (SBF), for instance, sponsors farmers with no other source of income to cultivate their land. (See Replanting Hope in Idlib).

A different project run by the Violet organisation offers loans to internally displaced people to invest in nurturing and harvesting olive trees.

Yet another initiative launched by the Islamic Sham Organisation saw the organisation rent a large plot of land in the town of Hass to cultivate wheat for the local population.

“We are trying to address shortages in wheat flour and offset high prices of bread which put huge pressure on people,” said project administrator Mohammad Zeidan.

“We are also trying to employ local people, and hope to implement more similar projects in the future to prevent further deterioration to Idlib’s agriculture sector.

“After all, this sector is the reason why Idlib is known as the Green Governorate.”

Hadia Mansour is the pseudonym of a Damascus Bureau contributor from Idlib, Syria.

Syria
Land
Connect with us