After Syrian Army's Defeat, People Trickle Back to Idlib Towns

After Syrian Army's Defeat, People Trickle Back to Idlib Towns 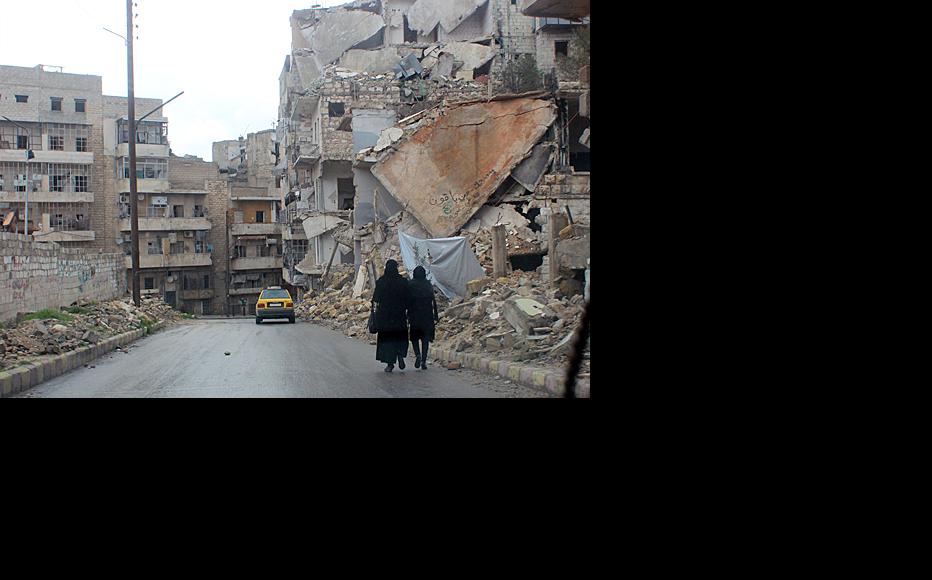 Two teachers pass through a street filled with demolished buildings on their way to a school in the Ansari neighbourhood of Aleppo. Photographer: Salah al-Ashqar
The link has been copied

Families have begun returning to towns and villages in the southern countryside of Syria’s Idlib province since rebel forces seized the Wadi al-Dayf and Hamidiya army bases in December 2014.

Most of those who fled the fighting took shelter in schools in neighbouring towns, or in refugee camps on the Turkish border.

Mohamad al-Salmu returned to Hamidiya hours after it was liberated. He went to check on the home he had left three years before, to find that the army had turned it into a makeshift military base.

“Today I am able to cast off the humiliation of exile, return to my work and take back my olive groves which they occupied, and most of which they burned,” al-Salmou said. “I can’t describe my happiness. We hadn’t even dreamed of being able to return.”

Some people stayed in Maarat al-Numan throughout the fighting. Abu Khaled owns a restaurant there, selling falafel and bean stew. Despite the battles, he refused to leave, even though most other residents fled.

“Some emigrated to Europe, others went to the camps, and others still took refuge in neighbouring towns,” Abu Khaled said. “I stayed here because my roots and my heart are here. It’s better to die under the ruins and rubble than undergo the humiliation of the camps.

“The regime worked by the principle of invade and occupy, and we say to it, go and read the history books,” he continued. “Our town has been burned seven times and rebuilt anew, ousting the occupiers every time. This is what has happened today with Bashar’s armed forces. They have brought us nothing but murder and destruction, but they left with their tails between their legs.”

Not all families have been able to return to their homes. The departing forces left landmines behind, and the area was devastated by heavy aerial bombardments – hit by planes and military helicopters as a form of revenge for the army’s loss of territory.

After government forces withdrew, aircraft bombed the Hamidiya mosque during Friday prayers, causing many civilian casualties. There was also systematic bombing of areas nearby.

This continuing violence means that some people are nervous about returning at this point, among them Abu Mohammad, who is still in the town of Hass.

“It’s too early to talk about returning to our home in Maarat al-Numan,” he told Damascus Bureau. “Military aircraft are still circling overhead and dropping bombs, and everyone knows the level of barbarism the regime is capable of. That’s why we have to wait until the regime is distracted by battles on other fronts.

“The other thing is that we’ve already begun working, establishing shops and business interests in the places where we’ve been displaced to, and it’s hard to move these back right away unless we feel there’s a relative sense of security and stability await us at home.”

The local council has already launched efforts to rebuild Maarat al-Numan. Sapper units from the 30th Division of the Free Syrian Army have begun defusing mines and munitions planted on the approaches to the town.

The municipality has begun clearing away the rubble of fallen homes and buildings destroyed during the shelling, cleaning the streets, dismantling barricades, reopening the main highway and restoring vital areas like the vegetable market and other central marketplaces.

The Maarat al-Numan council has put out a call to citizens to return to their homes, to bring life back to the city, as it puts it.

Council head Mohamad al-Shahna explained that the purpose of the call was to invite people to simply come and see their homes and assess the state of the damage, and to begin reopening shops and revitalising the marketplaces for which the city is famous.

“We began with a wide-ranging campaign to clean all the streets,” he said, “removing rubble and barricades, employing all the instruments at the council’s disposal to streamline the work as quickly as possible. We will continue with the work until the city is even more beautiful than before.

“We borrowed a lot of equipment from the councils of neighbouring towns in order to get the work done as quickly as possible, but we were unable to secure any funding to help us. There’s a huge amount of damage to the city. We will need to install a whole new electricity network, clean up vast areas of the city, and remove the rubble of destroyed buildings. This will take an immense amount of money, so we are asking the interim government and the National Coalition find ways of increasing their support so as to bring life back to this devastated city.”

Many here believe that now that the army bases have been cleared, about 250,000 people can return to their homes if they so wish.

But some have no plans to come back. Wissam al-Ahmad no longer wishes to return to a country governed by Bashar al-Assad, whose army destroyed Maarat al-Numan. There is not a single home in the city that has escaped the bombing, shelling and rockets, and not an inch of space that unscarred by war. Ahmad regards Turkey, where he now lives and works, as his new homeland.

Speaking Out: Women's Voices from Syria
Syria
Conflict, Refugees
Connect with us