President refuses to accept decision by a gathering he himself called.

President refuses to accept decision by a gathering he himself called. 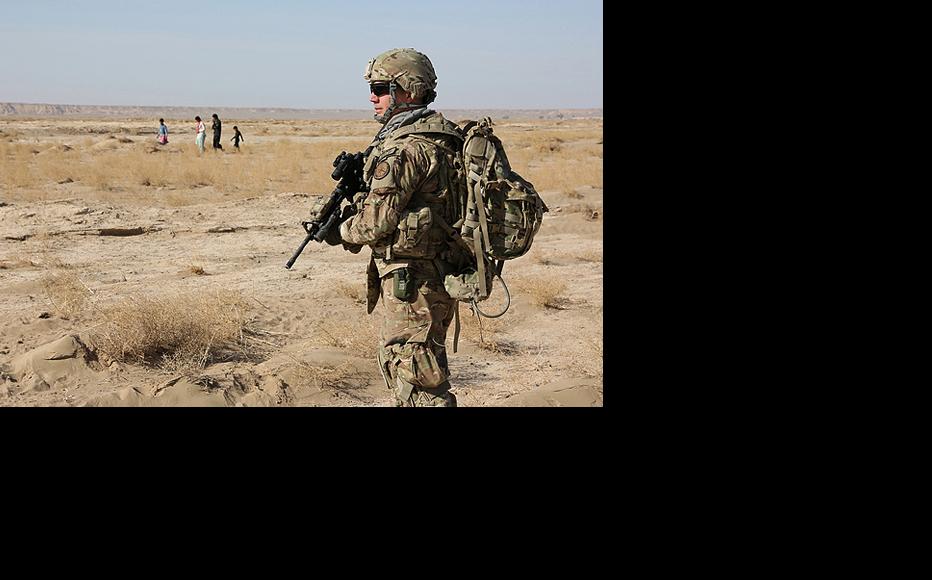 US Navy serviceman on security detail in Farah province. The Afghan president is resisting conditions set out in a security pact which Washington says are essential if American forces are to remain beyond 2014. (Photo: ISAF Public Affairs)
The link has been copied

An assembly of 2,500 notables in Afghanistan has approved a controversial security pact with the United States without major hitches. But the meeting threw up an unexpected and very public dispute about how soon the deal should be signed.

It was President Hamed Karzai who convened the Loya Jirga or “grand assembly” to discuss the Bilateral Security Agreement. Many observers think he did so to avoid taking direct responsibility for concluding a hugely sensitive but ultimately essential deal with Washington. By getting representatives of the Afghan nation to decide, Karzai would be able to remain at arm’s length while they argued against controversial points like granting American soldiers legal immunity or ending unpopular raids on private home.

In the event, though, the Loya Jirga overwhelmingly approved the security pact on November 24 after four days of deliberations. More than that, it called for it to come into force almost immediately.

The conference issued a resolution proposing compromise solutions to remaining points of difference in the security pact.

According to these recommendations, the US would get the immunity from prosecution it wants for troops remaining after most NATO-led forces leave next year, but any trials would take place in American courts convened in Afghanistan. In principle, US soldiers would be barred from raiding Afghans’ homes – except under “exceptional circumstances”, when they would be accompanied by Afghan forces.

The resolution said the Bilateral Security Agreement should be signed within one month. This will have pleased Washington, which has stressed the urgency of getting arrangements for the post-2014 period in place as soon as possible.

That is not, however, Karzai’s plan – he wants signing to be delayed until next spring, a point he reiterated in his opening speech at the Loya Jirga.

These differences spilled over into public argument in the assembly hall. The Loya Jirga’s chairman, elder statesman Sebghatullah Mojaddedi, gave Karzai an ultimatum.

"The president should promise to sign the pact soon. If he does not do so, I will be forced to leave the country for all my white beard [advanced age], because no one will listen to me," Mojadeddi said.

At this, Karzai took the floor to object to any agreement that gave US soldiers the right to enter Afghan homes.

In response, Mojaddedi said, "If the Americans commit offences, they will be met with public demonstrations. This nation is not dead – it is alive."

Karzai interrupted here to warn that the security pact would become void if house raids continued. Addressing the delegates, he said, "You are asking me to sign this agreement within a month. Will peace and security be ensured in Afghanistan in a month’s time? If not, who will take responsibility? Of course it will be me."

The president then veered off into matters not covered by the security pact, suggesting that Washington planned to fix the April 2014 presidential election, in which he is not eligible to stand.

He said that in recent discussions, US Secretary of State John Kerry had underlined the importance of getting the security pact signed soon, rather than after an electoral process that might be delayed by the need for a second round.

“I then realised that the US intended to interfere in the election. The reason I am saying we want a transparent election is because I was scared in that meeting with Kerry," he told his audience.

Loya Jirga participants have expressed consternation at the attempt to postpone the pact. Bostan Ali Ferozian, from Daikundi in central Afghanistan, said the security agreement was very much a product of the Karzai era, so it should not be left to his successor to sign it.

As might be expected, public opinion is fractured on the security agreement, the Loya Jirga, and Karzai’s handling of the whole thing.

Abdul Ghafur Lewal, a political analyst who was a delegate at the Loya Jirga, said the circumstances favoured a swift signing of the deal.

"Afghanistan’s eastern and western neighbours [Pakistan and Iran] have invested in instability and influence here over the last ten years. They will use all their power to derail the pact and destabilise Afghanistan," he said.

Lewal said that whatever Karzai’s concerns about attempts to influence the outcome of next year’s polls, “a delay to signing the pact would be more damaging than the US interfering in elections".

One major opposition party, the National Coalition of Afghanistan Front, boycotted the Loya Jirga on the grounds that it was not a legitimate forum for making this kind of decision, but now says Karzai should get on with signing the security pact.

"Since Karzai convened this consultative jirga and said he would respect its decisions, and the jirga then decided that the pact should be signed within a month, why did he raise new issues on the final day day?" National Coalition spokesman Fazel Hussein Sancharaki asked. "A delay to signing amounts to a kind of abuse – Karzai wants to extract concessions from the Americans so that they support his favoured candidate in the upcoming election, and his team retains political power."

Political analyst Jawed Kohestani said that while it was impossible to tell what Karzai was thinking or how far his statements were self-serving, taking time to sign the pact made practical sense.

“If the recommendations made by the consultative jirga are incorporated into the agreement, and these addenda are shared with the Americans, it’s obvious that this could take several months,” he said.

Kohestani has his own reservations about the Bilateral Security Pact, as he does not believe it unambiguously commits American forces to defend Afghanistan in the event of external aggression.

"If our interests are not protected in the pact, it’s irrelevant whether it gets signed sooner or later," he added.

On the streets of Kabul, uncertainty about the best way forward.

Ahmad Farid, who works for an international organisations in Kabul, agreed with Kohestani’s view that sorting out the final details would mean a delay to signing the security pact. He also accused the Americans of breaking so many promises to the Afghan people that “one needs to secure guarantees from them in any kind of deal".

As Washington continues to press for signing before the end of 2013, Karzai is still holding out. As well as specific conditions like a ban on house raids, he is setting vaguer preconditions like fair elections and general peace and stability.

“Ambassador Rice reiterated that without a prompt signature, the US would have no choice but to initiate planning for a post-2014 future in which there would be no US or NATO troop presence in Afghanistan,” a White House statement said.

According to the statement, Karzai set out “new conditions” for signing the agreement, and indicated once again that this would not happen “promptly”.