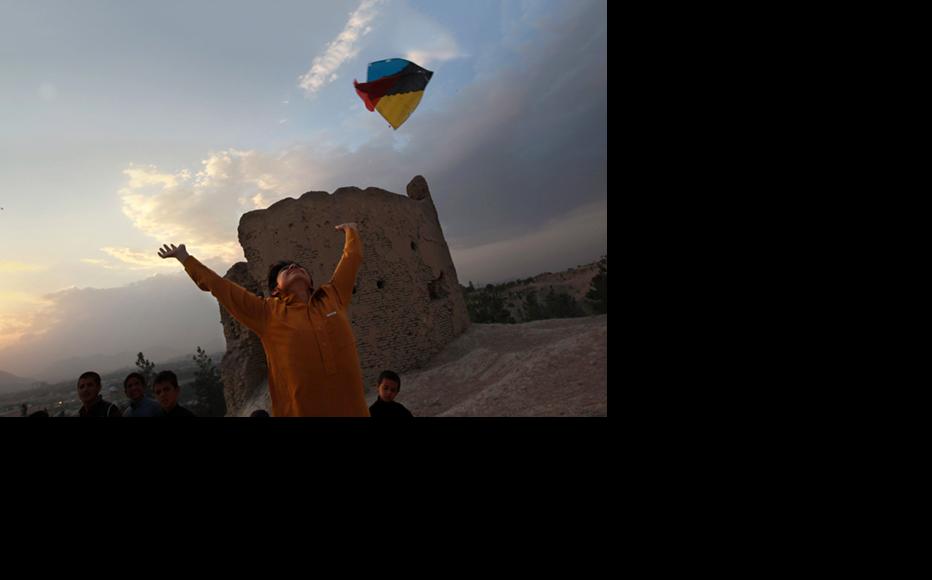 A boy flies a kite in Kabul. (Photo: John Moore/Getty Images)
The link has been copied

Peace activists who marched 600 km from Helmand to Kabul to call for peace have vowed to continue their activism with a series of protest tents outside foreign embassies in the capital.

The movement started when a handful of men from Lashkar Gah decided to launch a protest following a deadly suicide bombing on a local wrestling tournament. Crossing five provinces, numbers then swelled to more than 100 by the time they arrived in the capital.

“This was the first time that such a move has happened in the contemporary history of Afghanistan,” said Helmand Peace Caravan spokesman Bismellah Watandost.

He explained how the movement had grown.

“On March 24, 2018, a car bomb exploded in the Ayob Khan stadium located in Lashkar Gah, killing 16, including children, and wounded 52. So far, no one has claimed responsibility. A day after the incident, we set up a protest tent and called for peace and for the Taleban to announce a ceasefire, but they refused. Then we launched a hunger strike, but after 60 hours, our female relatives came to us and cried, asking us to end the strike.”

Despite the burning summer heat and the Ramadan fast, more and more people joined the marchers along the way.

“I tagged along with this convoy from Kandahar,” said one participant, Haji Nikzad. “Before this, I was working with a polio vaccination team in Kandahar, but since I felt this action had been launched for good reasons, I wanted to join in.”

Nikzad said that whenever they had talked to either Taleban fighters or Afghan forces along the way, all had said they were tired of war and wanted to live in peace and security.

Watandost agreed that this had been the overwhelming message of the march, but stressed that those involved were in no way partisan.

“Taleban members have told us that they have been forced to fight, and they’re tired of this situation, and the soldiers from the government side are also tired of fighting,” he said. “We are independent; we neither represent the Taleban nor have any connection to the government. We want reconciliation between them.”

The marchers have gone on to set up peace tents outside a series of foreign embassies to highlight the role of outside actors in the ongoing war.

Their arrival in Kabul coincided with an unprecedented truce between the Afghan government and the Taleban during the three-day festival of Eid which follows Ramadan.

Tens of thousands of Taleban fighters visited cities and some even took selfies with government soldiers and ordinary people.

Kabul resident Nisar Ahmad, 25, said, “When the Taleban agreed to the three-day truce during Eid and came to Kabul, we welcomed them. We hugged them and took pictures with them, and told them to come and live in peace because we are all tired of fighting. Women, children, the elderly, a future generation need peace.”

He added, “I personally told [a Taleban fighter] that if you and I compromise, and put an end to the disputes, we can reach a permanent, countrywide peace, on condition that we also avoid being exploited by foreigners.”

Watandost said that the three-day truce had, at least temporarily, met one of the four demands they had agreed on during their march: a ceasefire, peace talks, a jointly agreed law and the withdrawal of foreign troops.

Although the government offered to extend the ceasefire after Eid, the insurgents refused.

In a telephone call, Taleban spokesman Zabiullah Mujahid told IWPR, “As long as there are foreign troops in Afghanistan, we will continue our jihad. Currently, both the land and airspace of Afghanistan is controlled by foreign forces, so we see it as our duty to fight them.”

Marchers were welcomed by residents of the capital like Sayed Mahmood Hashimi, 22, who said, “As a young person, I appreciate the actions of Helmand peace caravan, and hope that it will remain impartial as it has been from the beginning, and not take on board any political views. I am optimistic about its goal, which is solely the restoration of peace, not the formation of a new group to stand against the government.”

Hashimi said that he had little faith in what the formal process had achieved so far.

“Reconciliation is only possible when negotiations between the two sides of conflicts take place and the lawful demands of each side is accepted. Previous government negotiations have gone round in circles. For example, the government paid a very high price to bring Hezb i-Islami [ an armed faction led by Gulbuddin Hekmatyar] to the peace process, but since it joined it has not done anything for peace except inciting tribal and political prejudice.”

Political analysts also lauded the grassroots nature of the movement, arguing that it could have a far-reaching impact.

“This is a very good initiative because it shows the world that Afghans are tired of war, and want to live in a peaceful atmosphere,” said political analyst Javid Kohistani. “It could also change public opinion in neighbouring countries and encourage them to make their governments stop intervening in Afghanistan’s internal affairs.”

The Taleban have said that they will not join the peace process as long as foreign troops remain on Afghan soil. Coalition forces withdrew from Afghanistan in 2014, although a limited number of US troops remained in an advisory and support capacity.

Kohistani noted that this was also a precondition of Hezb i-Islami, who nonetheless joined the process in 2016.

Nonetheless, he also sounded a note of caution over just what the Helmand Peace March could achieve.

“These types of moves do not lead to peace,” he concluded.

But Attiqullah Amarkhail, another political analyst, said that there were previous examples of grassroots movements influencing their government’s policies.

“When America was fighting in Vietnam, the people of America formed anti-war marches that finally led to the withdrawal of American forces We also regard this a good move; others might be inspired to participate and raise their voices.”