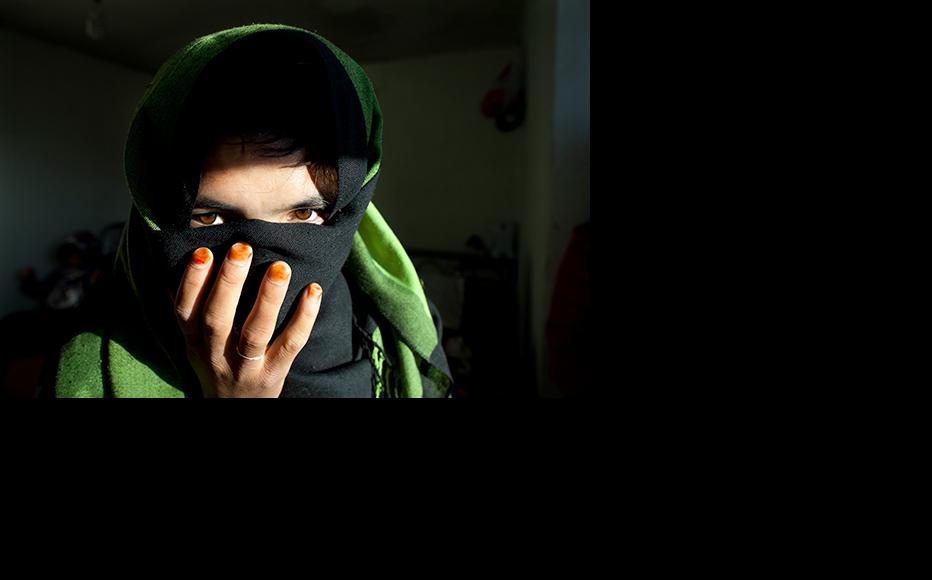 The beatings began soon after Zahra, now 22, was married off to a 75-year old man in exchange for a large bride price.

“My father was blinded by money and he gave me in marriage to this man,” she told IWPR. “Every time my husband was violent to me, his family members used to tell me, ‘Your husband has these rights over you, you should put up with it.’

“On many nights during the cold winter I was dragged out of the house for no reason, my hands and feet were tied with chains and I was forced to spend the whole night outside the back door in the snow, and no one would help me.”

The abuse became so severe that eventually Zahra’s case was brought before a community Jirga, or council of elders, for resolution.

But their intervention made no difference, and Zahra was forced to flee her marriage and take take refuge in a women’s shelter in Kabul, one of a handful of safe houses that NGOs have set up across the country.

Zahra, who managed to get a divorce from her husband, said she was happy living at the women’s refuge. Her family, however, wanted her to return home.

“I’m pleased with my life here, but my family still doesn’t leave me alone and says I should leave the safe house,” she explained. “I want my family to let me be and let me live my own way, because my life belongs to me and I need to decide my own future.”

In Afghanistan, women facing forced marriage or domestic abuse have few options. If they escape and ask for help from the police, they face either being returned or imprisoned, as Afghan women who run away from home or refuse to get married are commonly accused of “moral crimes”, a vague concept that does not exist in formal law.

Sometimes community elders are asked to intervene or host the runaway, but this is only a very short-term solution.

The idea of a safe house is to provide emergency accommodation where women and girls at risk can access legal advice and healthcare. Mediation is also available.

Nazia Faizi, head of the department of women’s protection centres, said that the first such refuge was set up in 2002, the year after the fall of the Taleban regime.

Since then 12 safe houses have been built in Kabul, Herat, Kapisa and Nangarhar province and are currently hosting some 600 women.

Faizi said that girls and women were not referred to a safe house with the intention of separating them from their family. It was rather an opportunity for them to resolve their differences and solve their problems through dialogue. This was not possible when a woman’s life and safety was at risk.

She explained that women received psychological and medical services during their stay in the safe house, and a lawyer was hired to defend their rights.

Literacy courses, vocational training and religious education were also provided, and women who wanted to return to study were referred to appropriate institutions.

Taahirah Faizi, a psychologist who visits the west Kabul safe house twice a work to work with the women there, said the aim was to support women in overcoming their trauma.

“We prepare women psychologically to be active in society and stand on their own feet once again, and it’s up to them if they want to return to their families,” she said.

But the whole concept of women’s refuges remains controversial in deeply conservative Afghanistan.

Some argue that they encourage women to leave their families and lead to immoral behavior, and persistent rumours circulate that women are often sexually abused inside the refuges.

In June 2012, the then Afghan justice minister, Habibullah Ghaleb, told female parliamentarians that shelters were “centres of prostitution”. He later apologised after coming under a barrage of criticism from human rights groups.

“The creation of safe houses in Afghanistan, which is a conservative society, has caused more social and family problems than it has solved,” said Sayed Abdul Ghafar Ibrahimi, a lawyer.

He claimed that women felt free to make trouble at home since they were confident of finding shelter at a safe house. This in turn led to the break up of families.

In addition, Ibrahimi argued that women’s refugees were viewed by the public as a foreign concept, incompatible with Afghan traditions, and called for the government to take a more active role in supervising them. Otherwise, he continued, they risked further alienating citizens from state institutions.

But others argue that establishing places of safety for women was essential in a society rife with gender violence.

“The Afghan government must work to strength and improve the rule of law in society, so that women get their rights and it won’t be necessary to brought them to safe houses,” said Sayed Maroof Jahid Hashimi, a lawyer. “But we can see that the dominant culture in our society, especially in villages and small towns, violates [young women’s] rights.

“Since women in the country are deprived of the authority to make decisions, and it’s men who rule and decide the fate of the entire family, women need government intervention to achieve their rights.”

“The rumours that safe houses are morally corrupt are completely false and I deny them,” agreed Shabnam Sima, head of women’s affairs at the Afghanistan Independent Human Rights Commission (AIHRC).

She noted that the AIHRC, the ministry of women’s affairs and the police all referred women to safe houses for their own protection.

Any allegations of sexual impropriety in a safe house would be thoroughly investigated, she insisted. If the allegations were proved, the refuge would be shut down.

But Sima said that such tales of abuse were simply malicious rumours spread by perpetrators of domestic violence whose victims were forced to seek refuge in safe houses.

Some women do complain about the treatment they received at safe houses.

Madina, 17, said that her experience at a safe house in the west of Kabul had not been positive. She had fled her in-laws house, explaining that soon after she got married in December last year, her mother-in-law began drugging her to drug her to make her sleep with unknown men.

She explained that after she was betrothed to her future husband Yama, who was living in the Netherlands, she discovered that he was already married man and had teenage children.

“I fought with Yama to break off the engagement, but he deceived me with his lies and slept with me before we were married,” she said.

“When my husband went back to Holland, my mother-in-law used to drug me so that I could be sexually abused by men. She told me that I had to take these pills to stay beautiful, but they were sleeping pills so I passed out.”

“One day when I had not taken any tablets – it was only nine in the morning - two men entered our house. They looked at me and said, ‘She’s normal today.’ I wondered what they were talking about, and realized that they had evil intentions towards me. When they came close I cried and screamed and all three of them began to beat me.”

Madina escaped and made it to a police station. From there she was taken to a safe house.

“Although there were scars on my body and my hand was injured, instead of treating me, I was abused with all kinds of vulgar language at the safe house,” she said.

Shamila, 23, spent eight months in a Kabul safe house and also said that it had been a frightening and intimidating experience.

“Women in safe houses fight among themselves, they are seeking dominance and supremacy over each other, from chairman to lawyer all are abuse women with ugly language,” she said, adding, “Families should treat their daughters well so that they don’t end up in safe houses.”

Benafsha Afaf is head of Women for Women in Afghanistan, an NGO working across 13 provinces of the country, said that nonetheless numbers of applicants for spaces in refuges were rising.

She said, “Since the beginning of 2007, the number of women referred to safe houses has been increasing.”

Afaf said that women could spend between six months and a year in a safe house, during which time they were supported by government funds.

As far as the allegation that safe houses were detrimental to women’s welfare, she said that there would be no need to provide a place of refuge if families and communities did not abuse women and girls.

Faizi, of the department of women’s protection centres, acknowledged that it was hard to combat rumours that safe houses were a western plot to undermine Afghan society when they were supported by foreign donors with little government oversight.

Up to now, the state had lacked the resources to fund their own refuges, but Faizi said that the ministry of women had proposed this as a alternative relying on the services of NGOs and had receved a positive response. She said that the president had indicated that state-run refuges would be set up in the future.