Afghanistan: Producing "the Queen" of Oils

Afghanistan: Producing "the Queen" of Oils 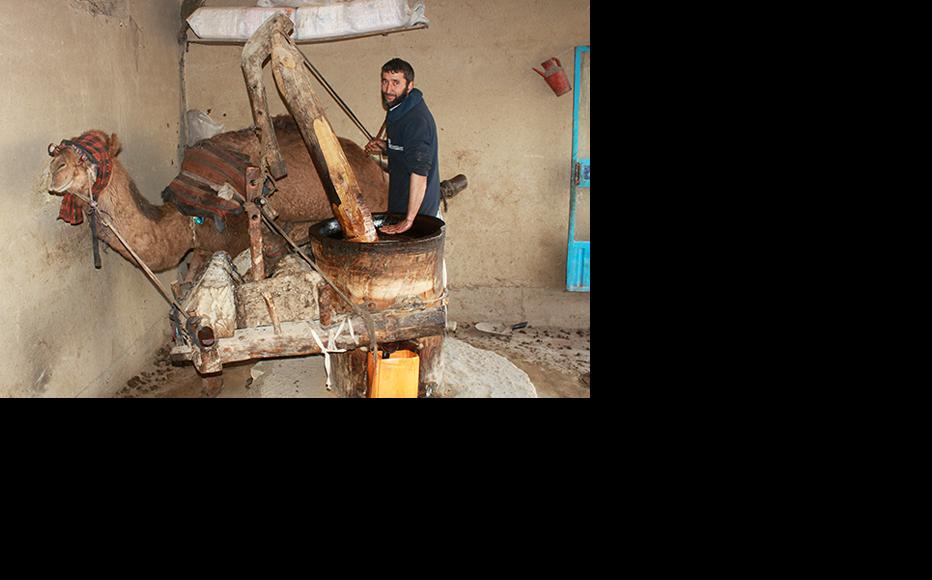 Producing sesame oil the old-fashioned way - with a camel. (Photo: Barat Ali Jafar)
The link has been copied

Abdul Rasul’s family have been using traditional methods to process sesame and linseed products in their Mazar-e-Sharif workshop for decades.

“I inherited the sesame oil business from my grandfather, who ran it for 40 years,” the 30-year-old told IWPR. But he said that rising prices combined with cheaper imports were now affecting sales.

“Sesame oil was widely sold 20 years ago in Mazar-e-Sharif city, but it’s not bought and sold very much nowadays,” he continued.

“Thirty years ago, we used to sell 120 kilos of sesame and linseed oils a day, but now we sell about 40 kilos each day.”

Sesame and linseed oils were once highly prized in Afghanistan, used both for culinary and medicinal purposes.

However, producers say that demand has dropped due to the high price of raw materials and the spread of cheaper foreign products. While there were once at least 80 sesame oil factories in Balkh province, locals say that no more than 20 are now in operation.

They also warn that this traditionally-made product and its numerous uses represents a part of Afghan heritage that should not be lost.

“My father told me that 40 years ago people used to bring sesame oil in containers made of animal skin to the markets from remote and mountainous areas,” said Mohammad Juma, who owns a small sesame and linseed oil factory in Mazar-e Sharif city.

Like many others in the sector, he still processes the seeds in the old-fashioned way using millstones turned by camels.

“If we work day and night, we can produce 60 kilos of sesame oil in 24 hours,” the 45-year-old said, adding that he sold his product in batches of seven kilos, each sold for 18 dollars.

Juma said that his customers were mostly interested in sesame oil as a treatment for conditions such as diabetes, high blood cholesterol and blood pressure.

The health benefits of the oils are backed up by medical experts.

“Sesame oil is known as the queen among all the edible oils,” said Mohammad Aman Haidari, a doctor at the Abu Ali Sena-e Balkhi Hospital. “Sesame oil has amazing qualities and can be either taken raw or used in the cooking of other dishes and meals.”

The unique qualities of sesame oil include lowering LDL and boosting HDL cholesterol, as well as combating high blood pressure and heart disease, he said. The vitamin E it contained might even help prevent Alzheimer’s disease.

Linseed not only helped keep blood sugar and pressure stable, but also protected the heart and vascular system. In addition, its anti-inflammatory qualities were useful in treating asthma and bone diseases, the doctor explained.

However, those who used linseed oil tended to buy cheaper foreign imports which were often adulterated with harmful additives, he warned.

“Traditional products are so costly and expensive that in our current conditions people aren’t interested in buying them,” he continued, adding that the government had failed to shore up domestic production.

Nabizada said that with state support, factories could improve their products and even begin exporting the oils abroad.

In Balkh province, sesame is still cultivated in distrcits including Chimtal, Chahar Bolak, Sholgarah, and Koh-e Alburz. Further afield, it is also grown in Jowzjan province as well as the Kohistanat district of Sar-e Pul.

Munir Farhad, the spokesman for Balkh’s governor, agreed that this could be a growth industry for Afghan farmers, and even a useful tool to counter the drugs trade.

“We should encourage our farmers to cultivate sesame, cottonseeds and flaxseeds instead of opium poppy because they bring more benefits,” he said, warning that the entire industry was under threat.

“With the development of new technology and with mechanisation, these traditional sesame and linseed oil factories are at the risk of disappearing,” he continued. “It’s difficult for sesame and linseed oil factories to compete with the plant oils which are imported to Afghanistan from abroad. For example, a kilo of plant oil is sold for a dollar… so it’s clear that people will buy the oil with the lower price.”

Farhad said that it would be a huge loss if the sector was allowed to wither away completely.

“Like Afghan culture itself, these sesame and linseed oil factories have been passed down from generation to generation,” he said. “These traditionally processes, the same as they were a century ago, [need to be] preserved as part of our culture.”