Ground-breaking election coverage sent out to Afghans across the country during crucial election period.

Ground-breaking election coverage sent out to Afghans across the country during crucial election period. 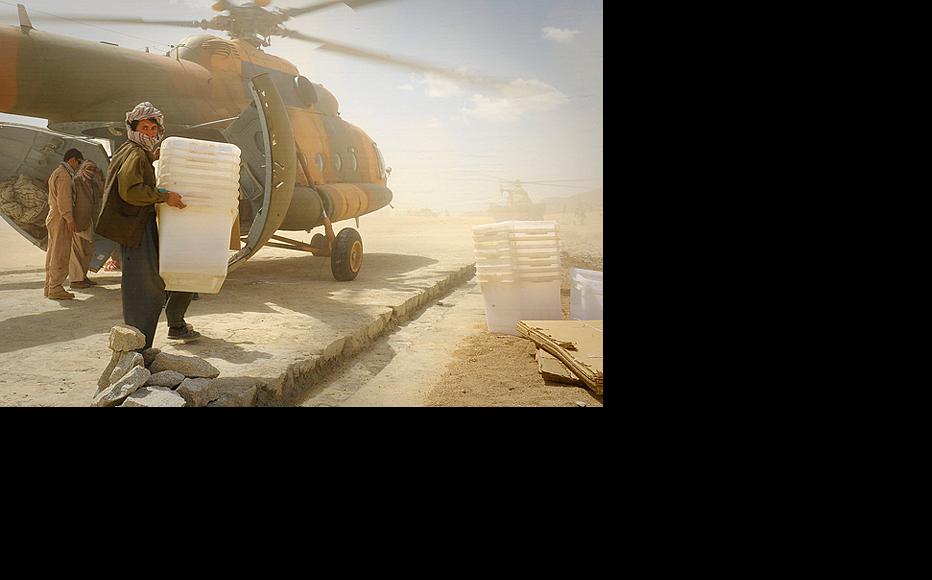 Afghan civilians and members of the Afghan National Army unload ballot materials from an Mi-17 helicopter in Jaghuri, in preparation for the September 18 election. (Photo: ISAF/U.S. Air Force Staff Sgt. Joseph Swafford/released)
The link has been copied

Millions of voters across Afghanistan have received election news on their mobiles as part of an innovative IWPR voter awareness cell phone project during the parliamentary election period.

Some 5.4 million text messages are being sent out to around 2.2 million people across the country before and after the September 18 polls.

A selection of ten SMS messages in Dari and Pashto – providing election-related information – were created by IWPR in cooperation with the Afghanistan Independent Election Commission, IEC.

The project has also incorporated an Interactive Voice Response system, IVR – an audio news service via mobile phones - allowing thousands of Afghans to access up-to-date election news, sent out several times a day from a team of editors in the Kabul office.

The user is sent a toll-free number, which then calls the recipient back free-of-charge. The option is then given to access audio stories in Dari, Pashto and English, with five election-related stories available daily in each language, each lasting between 30 seconds and one minute.

There are currently a number of IVR services operating in Afghanistan offering news and entertainment, but these all charge, and are expensive.

IWPR’s initiative – which also includes mass mailing technology where users are rung at random and played news recordings – is a fresh approach, allowing far more content and in-depth news to be distributed than via text messaging, the other main use of cell phones in news and information provision.

As part of the initiative, civil society organisations were additionally trained in the use of texting as a future means of civic education. During the election period, these groups sent out an informal election quiz text messages to gauge voter interest and participation.

Peter Eichstaedt, IWPR’s newly-appointed Afghanistan country director, who previously worked as IWPR Africa editor, said the project was a ground-breaking way of reaching those in more unstable parts of the country.

"It is exciting to once again be with IWPR on the front lines of journalism and technology. The cell phone voter project in Afghanistan is a new way to use existing technology to get news to people in remote and troubled areas,” he said.

“In many parts of the world where IWPR works, cellular phones are the only means of communication. Using IVR technology, we can deliver accurate and unbiased news to anyone who has a cell phone.

“The cell phone voter project has been remarkably successful just a short time after becoming fully operational in Afghanistan and has generated curiosity in many corners.

“The possibilities of this news and journalism technology being used in other countries seem boundless, especially in countries where oppressive government keep a choke-hold on the free flow of information. In short, this is the next frontier of journalism.”