Relatives of both of state security operatives and insurgents say they are subject to harassment from the other side.

Relatives of both of state security operatives and insurgents say they are subject to harassment from the other side. 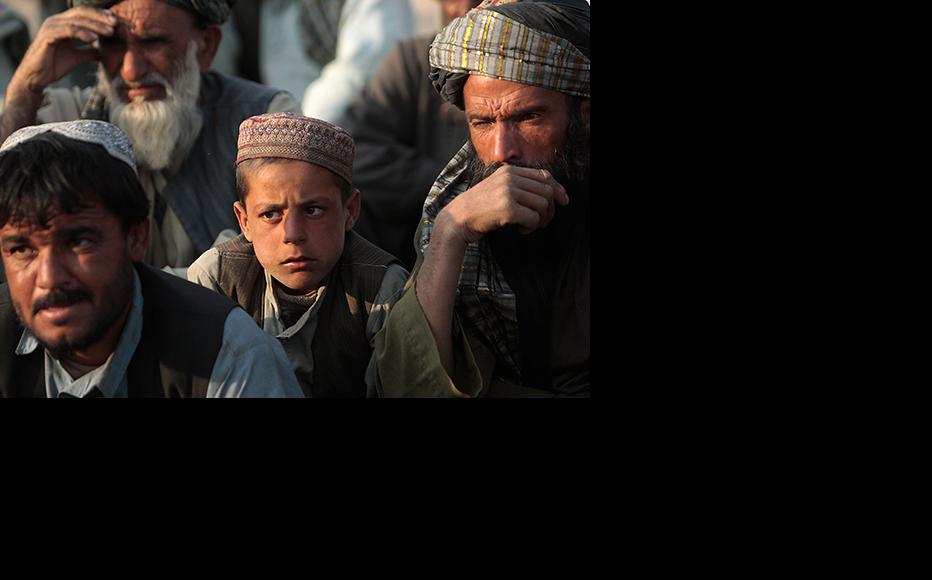 Ordinary Afghans face harassment due to their family links. (Photo: Chris Hondros/Getty Images)
The link has been copied

Gul Khanim, 30, was forced to leave her home in Parwan province’s Shinwari district after the Taleban killed her husband four years ago.

Now living in the Ashaba valley of Jabal us Saraj district, she is spending the freezing winter months living in a threadbare tent with her five children.

“One day the Taleban stopped my husband’s car, took him out and murdered him just because my brother-in-law Abdul Maalik was a local police commander,” she told IWPR. “I was so scared, I didn’t say a word because I thought they would kill me.”

While she is now safe from insurgent threats, she struggles to support her family.

“My brother-in-law helps us financially, but the amount of money he can give me is not enough,” Gul Khanim said.

Her two daughters and three sons, aged between three and 13, spend their days trying to find scraps of wood to burn so they can warm their tent.

Eight-year-old Rafiullah said that he used to love going to school, but understood that the family was now too poor for him to continue his education.

“My uncle was a policeman, but my father wasn’t,” he said. “So why did the Taleban kill my father?”

A three-month IWPR investigation has revealed how numerous civilians in Parwan province have fallen victim to retaliatory attacks by insurgent forces. Some have been forced to flee their homes, while others have been murdered.

But IWPR also found that local people whose family members had joined the Taleban also found themselves targeted by the state security forces. In some cases, merely coming from an area outside government control made people instantly suspicious.

Despite the overwhelming evidence, both sides deny resorting to such tactics.

Najib Danish, the deputy spokesman of the ministry of interior affairs, said that such harassment was one way the insurgents’ tried to discourage local people from working for the state.

“The Taleban want to use various tactics to harm the security forces,” he continued. “Threatening and intimidating their family members is one of their methods. The Taleban aim to dishearten and frighten security officers through pressure and coercion.”

Sometimes people were summarily executed for no other reason than their link to police officers or soldiers.

Alozai Ahmadi, the commander of the security forces’ joint base in Parwan, told IWPR, “More than 20 people have been killed by the Taleban in Shinwari, Siyahgird and Koh-e Safi districts just because members of their family were in the Afghan police force and national army.”

Ahmadi continued, “In the second week of December 2016, the Taleban seized three relatives of a member of the security forces, including two brothers, in the Ashtar area of Shinwari district in Parwan. All three were shot.”

In other cases, relatives were forced to flee their homes because of threats from the Taleban, Ahmadi explained..

IWPR met and interviewed tens of families who had been displaced due to such threats.

Bibi Ayesha, 60, is from Kuhn De in Shinwari district but now lives in rented accommodation in the centre of the province.

“The Taleban killed my 18-year old young son because he refused to join them. The fighters accused him of spying for the government,” she said. “I, along with my five grandsons and my daughter-in-law ran away from our home and came to the centre of Parwan province. If we had not escaped, we would have been killed by the Taleban too.”

She said that her experience was far from unique, adding, “The Taleban harass, torture and even kill the family members of those who work for the Afghan government.”

Abdul Samad, a 50-year old tribal elder from Hofyan Sharif in central Parwan center, said, “Two hundred families of security forces, of whom 30 are relatives of local police officers, have moved to Hofyan Sharif and the Tatmadra area of central Parwan from Shinwari district and these families now have many problems.”

Those who stay put risk injury or kidnapping.

Noor Mohammad, who lives in the Qawl Heer area of Shinwari district, said, “Because my brother was a local policeman, his daughter-in-law was held hostage by the Taleban and now the Taleban want her husband to divorce her wife so that one of the Taleban fighters can marry her.”

Local people in Parwan also accuse the government forces of unfairly targeting those with family links to insurgents.

Mirza Gul, whose son joined the Taleban six years ago, said that the security forces regularly harassed him despite the fact that he was not in touch with his child.

The 40-year old, from the village of Qamchaak in Siyahgird district of Parwan province, said, “I have been threatened by the security forces, especially by the local police, just because my son is with the Taleban. My son is living a separate life and doesn’t have any contact with me.”

Mirza Gul continued, “Whenever I went to the bazaar in Siyahgird I was arrested by the local police, who would take me in for questioning and keep asking why my son was with the Taleban. I told them that my son doesn’t listen to me and does whatever he wants.”

This harassment had become so bad that he was too frightened to go to Siyahgird for fear of arrest. Other family members had also been targeted, he said, including his other son Syed Mohammad.

“Last year when he went to the bazaar on his motorbike to buy some food, he was arrested by local police just because his brother had joined the Taleban. The local police took his bike and his cash and it was only after spending many days in prison that he was freed.”

Mirza Gul said, “My brother-in-law had two gas shops in Siyahgird bazaar which were set upon by the police and burnt down just because his nephew was with the Taleban. He had to escape the area for fear of his life.”

Mirza Gul said that he knew of 20 other families who were forced to leave their homes and seek refuge in other provinces because of harassment from the security forces.

“If the security forces keep torturing and oppressing us, we will have to join the Taleban ourselves,” he concluded.

Others said that they had been harried by the security services just because they came from areas under insurgent control.

Ghulam Mohammad, 65, lives in Gharo in the Siyahgird district of Parwan province, an area ruled by the Taleban. He said that this made him instantly suspicious to the security services every time he had to travel to the provincial capital.

According to a 2016 Human Rights Watch (HRW) report, insurgents were responsible for most of last year’s 8,000 civilian casualties.

However the 687-page report also noted that the government had made little progress in improving its human rights record.

Mosa Mahmoodi, chief executive of the Afghanistan Independent Human Rights Commission (AIHRC) said, “The protection of civilians’ lives and properties should be the priority in both politics and during military operations, but unfortunately this has not happened. This issue needs across-the-board improvement.”

Mawlawi Abdul Rahim Shah Hanafi, head of Parwan’s council of religious scholars, said that the Koran prohibited any retaliatory action.  This applied to both state actors and insurgents.

“Islam doesn’t permit parties involved in war to attack and injure civilians and vulnerable people who are non-combatants and not involved in the war, even if these civilians are unbelievers and non-Muslim.”

Deputy Parwan governor Shah Wali Shahid acknowledged that relatives of security forces personnel had been targeted, but denied that there had been any retribution.

“The Taleban have killed some family members of the security forces, but government officials have not tortured or threatened relatives of Taleban. Their claims are false.”

But Parwan police chief Mohammad Zaman Mamozai appeared to contradict this when he described an incident that took place some months ago.

Although IWPR interviewed dozens of families threatened by the Taleban, the armed group also denied all such allegations.

Taleban spokesman Zabiullah Mujahid said that it was the state’s forces that were carrying out revenge attacks and intimidation campaigns.

“Thirty relatives of Taleban members have been tortured, wounded and even killed by the Afghan security forces in Shinwari, Siyahgird and Koh-e Safi districts,” he told IWPR in a telephone interview

“If the relatives of members of the security forces are tortured, harassed or injured by our group, we investigate such cases,” he continued. “Our policies do not permit us to abuse these families.”