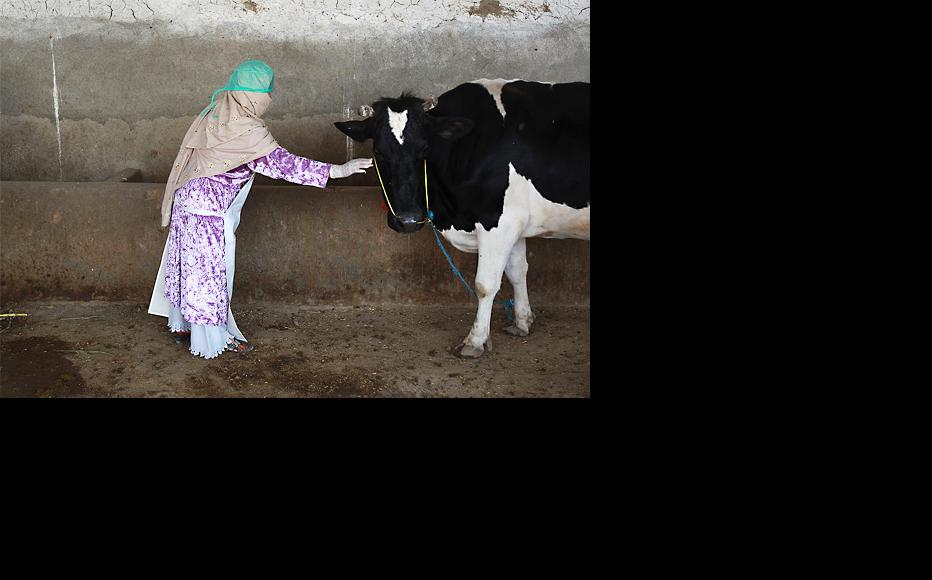 Afghan women are getting involved in dairy farming. (Photo: John Moore/Getty Images)
The link has been copied

Peaches, apricots and apples have transformed life for Nadia, a 32-year-old from the village of Tajikan in the northern province of Baghlan.

Six years ago she planted an orchard with the aim of becoming a small-scale fruit producer.

“The orchard became productive three years later,” she told IWPR. “Now I make over 1,000 US dollars from the fruit each year, as well as from growing vegetables and selling wood.”

It has not been easy. As well as obstacles in marketing her produce, Nadia worries about security and has to contend with prejudice because she is a woman.

“It really irritates me when I meet shopkeepers to talk about the selling my fruit and they tell me, ‘Go and send a man from your family because you are a woman.’”

Agriculture, a central pillar of Afghanistan’s economy, has traditionally been dominated by men. Women are sometimes recruited to work the fields or tend livestock, but have no say in any of the profits.

A number of schemes, however, have had considerable success supporting women who want to start small-scale agricultural enterprises.

Nadia is one of those who have benefited from the aid of the National Solidarity Programme (NSP), a flagship scheme set up to help local communities in Afghanistan run their own development projects.

Created by the Ministry of Rural Rehabilitation and Development in 2003, its Community Development Councils (CDCs) in villages across Afghanistan are funded to implement infrastructure or agriculture projects.

As well as receiving government money, the NSP is supported by the World Bank, the Aga Khan Foundation, the United States development agency USAID and the Afghanistan Reconstruction Trust Fund.

Zia Jan Noori, a 28-year-old from Pulkhumri city, is another beneficiary of the NSP programme.

“When I got married, I faced a very difficult and hard future because my husband was jobless and we were so poor,” she said. “But then someone told me to go to the NSP and seek their help. My husband was against it, but I went to their office despite his opposition. They provided me with 30 egg-laying chickens.”

That was all she needed to get started, Noori continued. “Now I have 100 chickens and I earn about 200 dollars a month from selling eggs. My husband also helps me in my work and our lives have changed dramatically.”

Nasratullah Shaheer, the NSP head in Baghlan, said, “We have been working over the last ten years to provide funding to women and our foundation has so far supported about 1,000 women.”

He continued, “We work in different sectors; for example, agriculture, livestock, making handicrafts, handbags and purses, embroidery and sewing. At first our helps is limited, but women who develop their projects are guaranteed under our constant and continuous support.”

“We are working across various sectors to improve women’s working capacity,” added She Beg Talibi, head of human resources at the Agha Khan’s office in Baghlan province. “For example, as part of development in the villages we help women in education, agriculture and handicrafts.

“We help women to be independent and stand on their own feet,” he continued, adding, “We have also built a health care institute for women in Baghlan from which many midwives and nurses graduate each year.”

Once the women’s schemes are up and running, they can expect additional support in terms of marketing and tax breaks.

“We help provide opportunities for women to sell their products in Afghanistan and internationally,” said Shah Hussain Hussaini, director of Baghlan’s chamber of commerce.

“With the help of the Agha Khan’s office, we have exhibited many products produced by women at Bibi Sabri Garden [a women-only park] to showcase and boost women’s agricultural efforts in Baghlan.

“We’ve also conducted many seminars with the help of other agencies to develop women’s business enterprises, and provide advice to women in various sectors,” he continued, adding that women running small businesses did not have to pay tax until their enterprise reached a certain size.

Khadija Yaqin, director of women’s affairs in Baghlan, agreed that agriculture and livestock farming were great ways for local women to boost their incomes.

“We know many women who led very difficult lives before starting their farming projects, but now they are busy in agricultural work which has changed everything for the better. In fact, they’re really happy with their work.

“Various organisations have held lots of useful workshops and seminars for these women,” she continued. “Customers who buy their products said they are of high quality and appreciate the honesty with which these women do business.”

Pulkhumri resident Gul Ahmad Yakta, who runs an ice cream shop, said, “I have contract with one of the businesswoman who has a dairy farm. For three years now I have bought milk from Bibi Bibi Sidiqa. She provides me with 20-30 litres of milk every day. Her milk is very pure and she is very trustworthy.”

She added, “In the past I had a milk contract with another businessman, but the quality was not good.”

Even some of those who were at first opposed to women starting farming projects have now been won over.

“Before my wife started the agricultural work with the help of the NSP, our life was not so good,” said Nasim Gul, a farmer himself. “Although I had five hectares of land in the Doosh district of Baghlan, they weren’t enough to support our daily needs.”

But working together has transformed their economic situation, he continued.

“Not only our life has become so good, but we also have savings,” Gul said. “I realise now that I was wrong, because women can do anything that men can do.”