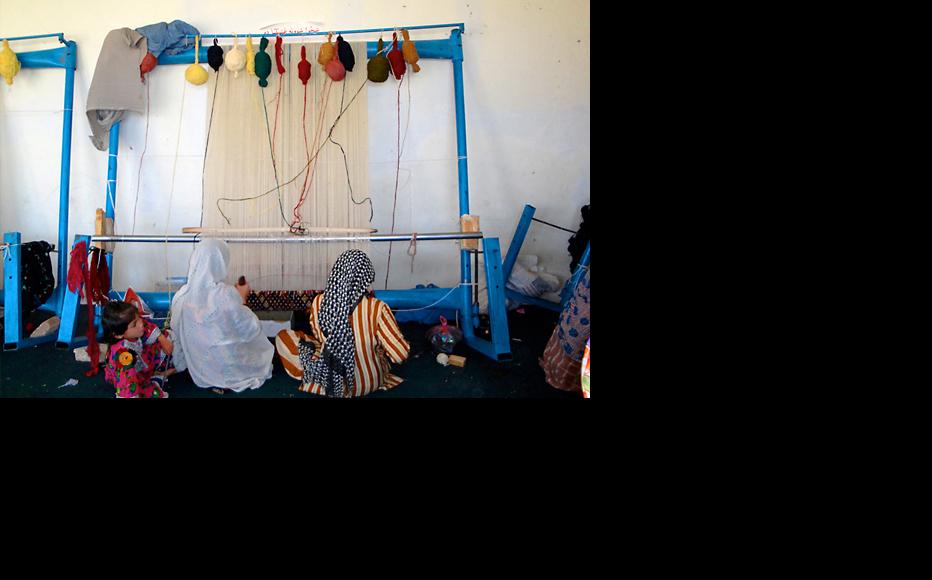 Afghan women prepare to weave a traditional rug. (Photo: Canada in Afghanistan/Flickr)
The link has been copied

“I used to beg,” said 30-year-old Wahida. “Now, I work as a seamstress and feed my whole family.”

Wahida, a resident of the Parwan’s provincial capital Charikar, told IWPR that her life had been transformed due to a training course run by the provincial department of women’s affairs.

She had been the only breadwinner for a family of five as her husband was a drug addict and unable to work. Waheeda’s only previous income had been from begging and occasionally taking in laundry, but her new skills had changed all that, she said.

“I [now] charge three to eight US dollars for each set of clothes I prepare; I have an income of up to 100 dollars a month,” Wahida continued. “My life is very good. I will always remember those taught me this profession in my prayers.”

Vocational training for women in a range of marketable skills has proved highly successful in the eastern province of Parwan, although female entrepreneurs say more government investment is needed to ensure their financial independence.

Safia heads the training centre run by Parwan’s provincial department of women’s affairs and supported by the charity Care. She said that 600 women had so far graduated from courses ranging from sewing, weaving, baking and quilt making to English language classes, computer skills and beautician training.

Most of these women, trained in six rounds, were now economically self-sufficient, she said.

“Every training period lasts three to six months; during this time, the trainees are given two dollars a day for transport expenses and the trainers are paid a monthly salary of [around] 130 dollars by Care,” she said.

Work tools and equipment were also provided free of charge to the students.

Suraya, 25, learned how to sew in the training centre three years ago and now supports her parents and her two younger brothers. Although she has put her own life on hold to look after her family, she says she has no regrets.

“I am compelled to not marry until my brothers grow up, because there is no one else to feed them apart from me,” she said, adding that nonetheless she can now earn between 150 and 200 dollars a month.

Safiullah Shams, head of the regional office of the UN’s Habitat development programme, highlighted the long-term effect of vocational training.

Shams told IWPR that nearly 7,000 women had graduated from a scheme they ran from 2005 to 2012 in conjunction with the National Solidarity Programme, a scheme intended to empower local communities to manage their own development projects.

He said that the courses they had offered, including carpet-weaving, poultry breeding, sewing and animal husbandry, were still showing dividends.

“According to our findings, these trainings led to significant changes in the lives of needy women,” he said.

“The root of most violence in the family is poverty,” she said. “This process has reduced the violence against women by making them financially independent.”

She added, “Some women have managed to set up their own small businesses.”

GIVING BACK TO THE COMMUNITY

Siah Moy Hashimi runs a beauty parlour in Charikar city, having learnt her trade in Iran. She charges between seven and ten dollars for a regular makeover and up to 100 dollars to prepare a bride for her wedding.

Business is booming; she can expect takings of 50 dollars each day with a bridal party booked in at least once a week.

Hashimi is passing on her skills to other aspiring beauticians through the vocational training centre, where more than ten students are enrolled in her course. She is paid 150 dollars a month for her teaching work.

“I have trained 120 students so far,” she told IWPR. “Each of them has established their own beauty salon in Parwan city; they have enough work and are doing well financially.”

A challenge for those entering the handicraft market is how to increase demand for traditional products.

Nadia, 20, a resident of Charikar, learned how to weave with beads six months ago in the training centre. She has now abandoned that to learn tailoring.

“Bead weaving is good work, however there was no demand for it,” she said. “I could barely sell what I had made. There’s a good market for tailoring and now I’ve learned this profession, I want to use my skills to look after my family.”

Other female entrepreneurs warn that expanding their businesses is impossible without government support.

She struggles to keep up supply as she only has the resources to commission work that has already been paid for.

“I [tried taking] various designs to sell in the market, but there was no demand. They offered low prices for them, I had to bear losses,” she said. “The government should help us market the clothes these female trainees prepare.”

Gia, from the provincial department of women’s affairs, agreed that this lack of additional investment was a problem. She said she had raised the issue during a meeting with Rola Ghani, the wife of Afghan president Ashraf Ghani, who promised her support.

She added, “Improving the lives of women was a central aim of the government in the meetings I had with officials.”

For now, the training schemes continue to make a big difference to women in Parwan.

Gul Chehra, 40, was widowed ten years ago and moved to the provincial capital from Ghorband district with her two sons and a daughter.

They struggled financially, but she never gave up hope.

“In the beginning, I made quilts; then, I learned tailoring through Parwan’s department of women’s affairs. Now, I earn at least 10 dollars a day. Our life is good now; my children attend school. I thank all those who prepared the ground to provide such opportunities for women.”