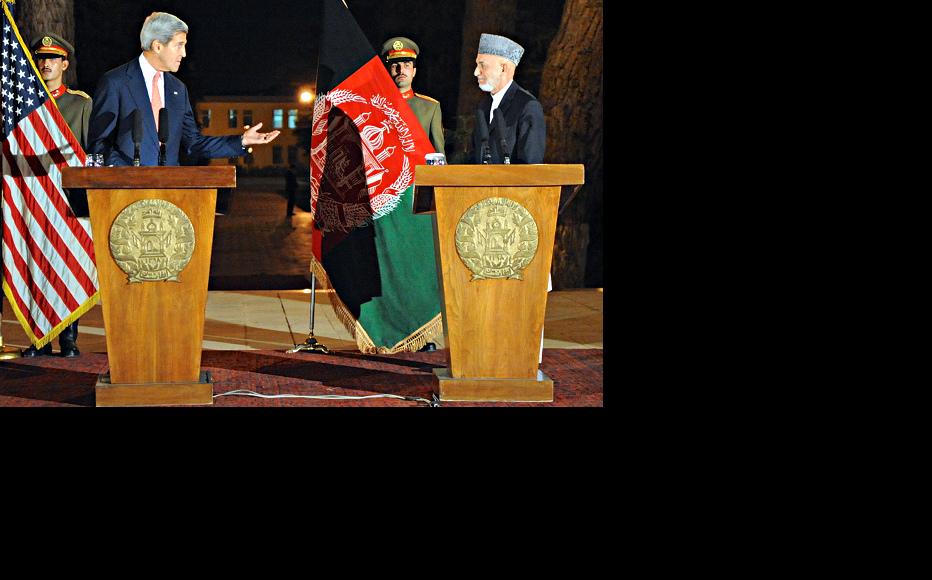 US Secretary of State John Kerry and President Hamed Karzai in Kabul, October 12, 2013. (Photo: US State Department/Flickr)
The link has been copied

The long-awaited Bilateral Security Agreement is intended to govern US-Afghan defence cooperation after most of the NATO-led troop contingent leaves Afghanistan next year. Its full terms have not been made public, although Kerry and Karzai indicated at that end of their October 11-12 talks that most of the major issues had been resolved.

Karzai said he had received written guarantees respecting Afghan sovereignty, detailing Washington’s commitment to defend the country from external attack, and ensuring that American forces would not carry out independent operations.

However, the gruelling two-day negotiations failed to produce an agreement on the crucial issue whether the US soldiers who stay on in Afghanistan to train the national security forces should have immunity from prosecution.

President Barack Obama has said immunity is essential if the troops are to remain, but Karzai said this would need to be debated by a loya jirga or nationwide assembly, which he said would be held within the next month.

“Legal immunity does not lie within the powers of the Afghan government, but is a matter for the people of Afghanistan, and the loya jirga will decide on it,” he told reporters during a joint press conference with Kerry.

The Secretary of State, for his part, said the legal position would need to be the same as applied wherever US troops were stationed around the world.

“Immunity does not mean freeing US forces accused of wrongdoing. If our soldiers in Afghanistan commit a crime, they would be prosecuted under US law in the US,” he said. “We need to say that if the issue of jurisdiction cannot be resolved, then unfortunately there cannot be a bilateral security agreement.”

Ramazan Bashardost, an Afghan lawmaker frequently critical of the government, said the true outcome of the Kerry-Karzai talks was far from clear.

“What is broadcast in the media is different from what is going on behind the scenes. Neither the Afghan government nor the US ever tells the truth to their peoples,” he said. “I have no confidence that these negotiations conducted by Hamed Karzai are sincere and in the interests of Afghanistan.”

Bashardost compared the draft pact to the US-Afghanistan Strategic Partnership Agreement, signed last year, which laid out the basis for bilateral relations post-2014. He said the US had failed to honour that agreement, which envisaged that American-run detention facilities and responsibility for special operations would be transferred to Afghan forces, and which also covered aid and development.

Bashardost said the Bilateral Security Agreement should extend to protecting Afghanistan from the rocket attacks Kabul has repeatedly accused Pakistan of launching across the border. Pakistani officials have denied that their forces have carried out deliberate strikes.

“The US, just as it neglected [action on] the rocket attacks from Pakistan on Afghanistan and ignored the strategic agreement, will do the same with the security agreement, because there is nothing to guarantee implementation of such agreements,” he said.

Political analyst Wahid Mozhda said there was clearly a great gulf between the two sides.

“There were differences between what Karzai and Kerry said. Kerry didn’t mention the issues on which Karzai said they had reached agreement,” he told IWPR. “He only insisted that legal immunity for Americans in Afghanistan was a requirement that the US could not concede, but he made no comments confirming what Karzai had said. That means Kerry probably didn’t agree with it.”

Mozhda noted other regional tensions arising as a result of the NATO troop exit, such as the 40-year deal which Russia recently agreed with Tajikistan to extend its military presence there. This would help protect the Central Asian state from militant threats emerging in Afghanistan, but would also strengthen Moscow, a long-time US adversary, he added.

Mozhda said there was no need to call a loya jirga to consider granting legal immunity to US soldiers, as the issue had been discussed and rejected by a previous assembly.

He warned that if the security agreement went ahead, it would not result in stability.

“When the agreement with the US is signed, Afghanistan will not benefit, because the United States’ opponents in Afghanistan and in other countries will not remain silent. They will start fighting the Americans, and the countries behind these opponents will increase their backing for them.”

Taleban leader Mohammad Omar, in an address posted online to mark the festival of Eid al-Adha, insisted that the Bilateral Security Agreement “will never be accepted” and warned that his movement would continue its fight.

Some analysts argue that the Afghan government is so vulnerable that it is in no position to drive a hard bargain with the US.

Political and defence affairs analyst Jawed Kohistani said he understood that Afghanistan’s National Security Council had been unhappy with the way Karzai dealt with Kerry, and had complained that he took an unnecessarily tough stand.

Kohistani said a weak state like Afghanistan needed a strong strategic partner like the US, and a continuing American military presence would help protect it against internal strife as well as external threats.

“We already rely on US support, including for our army. We need to continue receiving help from the US and its allies until we become self-reliant,” he said, adding, “Trust me, if the US stops helping our army for one month, our army will dissolve.”

Like other analysts, Kohistani noted Karzai’s and Kerry’s demeanour at their joint press conference, which he said pointed to tensions between the two men.

“During the [press] conference, I saw how they said one thing while their appearance and facial expressions said something different,” said Nur Mohammed, who works for an international organisation. “They seemed like two enemies, without even a normal smile visible, so it’s clear there are still many problems remaining.”

He said Washington would need to respect Karzai’s wishes if it intended to maintain the relationship, adding that the political realities were so complex that it was hard for Afghans to know what would ultimately benefit them.

“If the US leaves Afghanistan, we face the Taleban, Pakistan, and Iran,” he said. “If the US stays in Afghanistan, the war gets longer, more brutal and more complicated. Either way, Afghans suffer.”