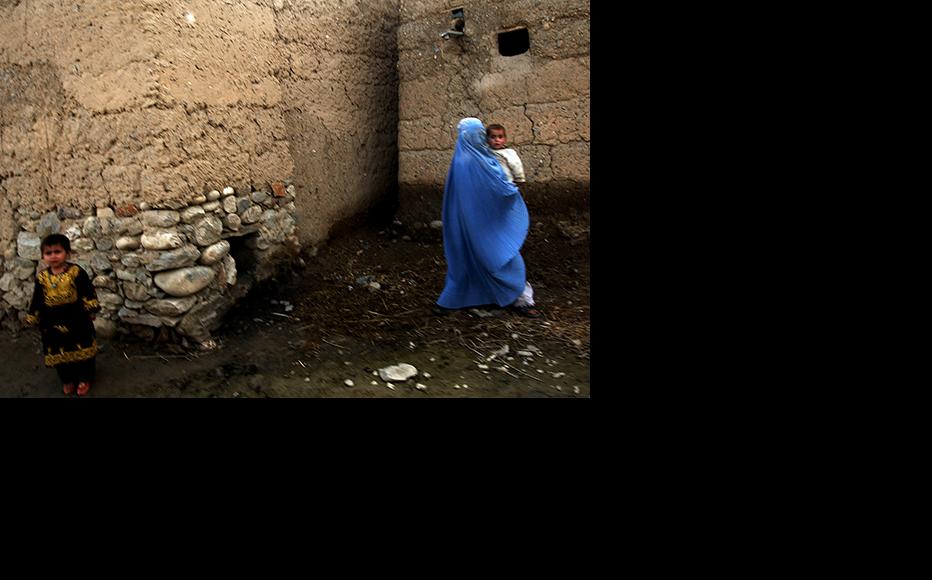 A woman with children in Nuristan province, Afghanistan. (Photo: Spencer Platt/Getty Images)
The link has been copied

Dressed in tattered, dirty clothes, 23-year-old Roshana crouches to weed her vegetable plot. The young mother-of-four says that her life in the village of Zhunia, in the Doab district of Nuristan, is one of constant struggle.

When she was just 15, her father married her off to a local man, Mir Zaman, against her will. Ever since then, she has slaved to raise crops on their small plot of rented land.

Each year she grows wheat, corn, beans, and vegetables that she says is worth at least 1,000 US dollars. But their landlord takes half of it.

Roshana has sole responsibility for all farming and domestic tasks. She plows the land, goes out in the cool of the night to irrigate the fields, and looks after the animals in addition to hauling firewood from the mountain and taking care of the house.

The cost to her health has been punitive. Soon after she married, she lost a child after spending a cold winter night working in the fields.

"I fell in the ditch and got wet,” Roshana recalled. “Suddenly, I felt labour pains. I went towards home. It was a dark night and I fell and got up several times before I got there. My child was born at home, but it died. This is one of my worst memories."

Her husband Mir Zaman, 35, said that local tradition dictated that women took on all such chores.

"It is the custom in Nuristan that women do the farming, look after the animals, bring wood from the mountain, and even when someone builds a house, the women bring the stones, bricks, and soil," he said, adding that local feuding meant that men feared attack if they strayed too far from their own villages.

"I have enemies myself,” he continued. “I can only go to the areas surrounding my village and not far beyond, because people are after me and will kill me."

Nuristan, a province in the east of the country famed for its wild natural beauty, is one of the county’s most inaccessible areas. Daily life revolves around animal husbandry, farming, and hauling wood from mountains heavily forested with pine, oak and spruce.

The province was known as Kufristan - land of the infidels – until a mass conversion to Islam in the late nineteenth century, when it was renamed Nuristan or land of the enlightened.

Residents have kept many traditions from the pre-Islamic era, including a division of labour between the sexes that means it is customary for the women of the household to be tasked with all the household’s heavy work.

Qudratullah, the director of Nuristan’s Doab Hospital, said that local women suffered many health issues as a result of this heavy labour.

Orthopedic problems were widespread, with the vast majority of women treated at the hospital complaining of severe musculoskeletal pain.

"Very bad customs from the past have persisted here,” he explained.” If a man brings wood from the mountain, looks after or feeds the animals, other men taunt him and call him his wife’s servant. So it’s considered shameful for men to do such work."

Women often spend whole days chopping timber and loading it into giant baskets. Each woman will carry between 40 and 60 kilogrammes of wood home, sometimes with disastrous results.

Guljana, 54, has been blind for the last 16 years after an accident while gathering wood.

The Nurgram resident said, "We’ve inherited this tradition of heavy labour from ancient times, but the really difficult part is that despite the work we do, men are still not happy with their wives and often beat them."

With Nuristan one of the most underdeveloped provinces in Afghanistan, women are particularly hard hit by lack of access to healthcare.

Ismail Stanikzai, the director of public health in Nuristan, said that a major problem was the lack of female doctors. Despite their best efforts over the last 16 years, local health care officials had failed to induce a single female doctor to work in the remote province.

The province had 35 midwives, all high-school graduates who had been sent to study in Nangarhar, he continued, but healthcare provision was patchy. The eight clinics in the provincial capital Paron, for instance, had 10 personnel each, but a further 20 in more remote regions only had four members of staff each.

Ghulam Hussein, the local director of education, said that out of the 223 schools across Nuristan, 100 were set aside for girls. More than 22,350 female pupils were registered at these schools.

However, he acknowledged that these figures did not show the full picture, as more than half of those girls enrolled had never come to school and attendance amongst the rest was patchy at best.

Of the 395 students who graduated from high school last year, only 53 were girls. The 200 who went on to take university entrance exams included just 15 girls. There are no higher education establishments in Nuristan, whether state or privately run.

Families routinely took daughters out of school to work or get married, often selling them into marriage for a few thousand dollars.

In Doab, Nurgram, Waigal and Kamdish districts, bride prices are around 4,000 dollars, rising to 7,000 dollars in the centre of the province.  In Mandol district, a girl can be sold into marriage for 200 goats, three Kalashnikovs, 35 kilogrammes of animal fat and 35 kilogrammes of dried yoghurt.

In such conditions, women frequently turn to narcotics to ease their days.

Shakira, 18, is from Khas village in Barg-e Matal district and one of the very few local women to continue her education. She is now studying to be teacher, but she said that the bleak lives of most women she knew meant that at least a third of them turned to drugs.

"After having to carry out heavy work women use hashish, and opium to relieve their fatigue and soothe their pains," she said. Both drugs were easily available as marijuana was locally grown and opium imported from the neighbouring province of Badakhshan.

"Most women in Barg-e Matal are addicts,” she added.

Sahira, 40, has three daughters and two sons. Her husband, Mir Gul, is a shepherd but Sahira farms their land and returns home late each night.

Exhausted after a day spent in the fields, she smoked a dollar’s worth of opium every night to relax her and relieve her aching muscles.

Her husband Mir Gul said that he never used opium himself, but that it was just a fact that most local women were addicts.

A HANGOVER FROM THE PAST

Locals attribute the situation in Nuristan to the legacy of previous centuries. A local religious scholar, Mawlawi Mohammad Sharif, said Islam did not mandate the division of labour common in Nuristan.

"Islam gives women a special position,” he said. “It made it obligatory on the man to support his wife and children. Women are only responsible for looking after their homes and children, not farms and agriculture, irrigation, taking animals to pasture, bringing wood from the mountain and other such activities."

"Back when Nuristan was still called Kufristan, men would take part in wars and also work as shepherds when necessary, but gathering wood and working the farmland was women's responsibility,” agreed tribal elder Mohammad Shah Rahimi, the head teacher of Nangraj Girls High School in Nurgram district. “Most shepherds in Nuristan are men, and women have kept their previous role of working in the fields and gathering wood."

Rahimi said that virtually nothing had been done to address the rights of women in the province since the fall of the Taleban 16 years ago.

The only solution, he continued, is to provide girls with proper schooling. But local and national officials, despite paying lip service to women's rights, had failed to do anything to encourage this.

Deputy governor Mohammad Hashim Faizi said that it was hard for the government to change such deep-rooted traditions, but that they were trying to draw national and international attention to the situation in Nuristan.

One of the reasons local communities were so resistant to change, he continued, were particularly low levels of literacy, a view supported by local women’s rights' organisations.

The director of women's affairs in Nuristan, Zahida Faizan, said that problems were so deep-rooted that she sometimes despaired of ever making progress.

"We have had numerous meetings with tribal elders, religious scholars and young people in Nuristan,” she explained. “We’ve informed them about women's rights and problems, but it has been futile, because everyone here, from administrators to religious scholars, has the same problem; it suits them that the women in their families work.

“The tribal elders and religious scholars do not participate in these programmes as they should. It is also beyond the capacity of the government."

Abdul Ghafoor Ahmadi, the chairman of Nuristan’s civil society coordination council, also said that local officials had failed to have any impact on women’s’ lives in the province.

Over the last two years, his organization had managed to form a 10-member committee of women to try and raise awareness about women’s rights, but they were very limited in what they could do.

“The security situation as well as the harsh traditions in Nuristan have restricted our activities only to the centre of the province, Paron," he concluded.

Sabrina Hamidi, the director of the eastern branch of the Afghanistan Independent Human rights Commission (AIHRC), said that perilous security conditions presented them with the same problem.

Until ten years ago, AIHRC delegates had repeatedly travelled to central and western Nuristan to meet with local woman and help educate them about their rights. Since 2007, however, the security situation had deteriorated to the point where they could not even travel to the centre of the province.

The AIHRC could now only obtain information about the situation in Nuristan from local volunteers.

Yet despite the challenges, local activists and officials said they saw some hope for optimism.

Faizan said that her department had organised a number of public meetings with local women so as to better inform them about their rights.

"These activities can be effective when women have a little bit of knowledge and education," she continued, adding that their current plan was to request support from the Kabul government and international organisations for small-scale projects such as poultry farming and carpet weaving for women. This was one way of providing them with a level of independence, she said.

"We are planning to organise vocational courses for women in cooperation with the department of women's affairs, which will include handicrafts training," added deputy governor Faizi, noting that a small minority of women had obtained permission from their families to study, pointing to the province’s 90 female teachers as a small victory for progress.

Mariam is one of the lucky few who managed to complete high school and is now attending teacher training college as well as working with the provincial committee of the Red Crescent.

"From childhood, I wished to become a teacher,” she said. “I study at the teachers' training centre as well as working with the committee. My dreams have come true."

She is painfully aware, however, that hers is an unusual story.

With tears in her eyes, she said, "All women hoped for positive change and to leave their problems behind them after the Taleban regime fell, but I think in Nuristan this wish will never be fulfilled."