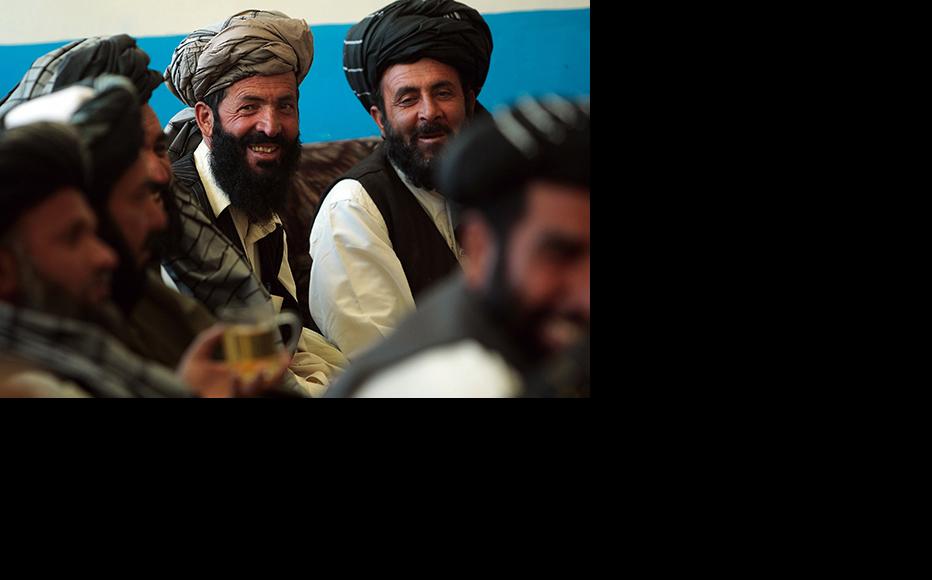 Village elders gather for a weekly meeting called a shura to discuss issues of local governance. (Photo: Chris Hondros/Getty Images)
The link has been copied

Local police units in Paktika province say they want their recent successes in driving out the Taleban to be translated into better pay and more advanced weaponry.

The Afghan Local Police (ALP), which emerged from a range of village militias, are separate from the regular national police. The 2010 Afghan Local Police initiative formalised the status and structure of these units and brought them under the authority of the interior ministry.

As they are drawn from the local community, the ALP has often been able to win a higher level of trust from local people.

Paktika provincial security chief Khalilullah Ziyaee said that local police units had been formed in 19 districts of the province.

Each unit, he continued, was linked to a family or tribe from a specific area, which meant that they had a better chance of establishing security within their own region than other government security forces.

“The strength of local police is that they are themselves residents of these areas,” agreed military expert Toryali. “They are familiar with local customs and traditions, they help people out.”

This meant that local police had proved to be more effective than national forces in Paktika, he continued, particularly in those districts controlled by the Taleban.

One example was Yahya Khail district, which had previously been under the control of the armed insurgents. After local police forces were mobilised there, the Taleban were dispersed.

“The creation of local police has served to bridge the gap between ordinary people and the government, because local people previously had no cooperation with the government in areas where the Taleban had influence,” Toryali continued. “But now due to closer relations… people can share their problems and achievements with the government.”

Abdul Salaam, the commander of the ALP unit in the village of Matakhail in Yahya Khail, agreed that his forces’ great advantage was the support they received from local people.

“Before the local police were formed in this area, the Taleban killed around 20 tribal elders in 20 days and forced more than 80 elders, youths and government officials to leave the area,” he said. “After that, people were forced to rise up against the Taleban and other armed groups in the area to prevent further bloodshed.”

But local police say that as well as better salaries they need more sophisticated equipment, including armoured vehicles. The insurgents, they argue, cannot be beaten back with the limited resources currently available to the ALP.

Bismillah, a resident of Yahya Khail, has been working with the ALP for the last three years. Before he joined, he recalled, Yahya Khail was too dangerous to enter.

“The Taleban killed so many tribal elders, government workers and many other young people in our area,” he said, adding that the ALP’s efforts had transformed the situation. People could now go about their daily lives in peace, he continued.

“We are working hard day and night and risking our lives for the security of the region, but government officials are incompetent, they don’t pay us proper salaries, we don’t have heavy weapons, compared to our enemy our hands might as well be empty,” Bismillah concluded.

Another ALP member, Sheer Ahmad, said that he had to support 22 family members on his salary.

As well as higher wages, he also said local police needed heavier weaponry if they were to defend themselves against the insurgents.

“We currently only have Kalashnikovs, we don’t even have the PK [general purpose] machine guns we need, there is only one DShK [heavy machine gun] and rocket launcher for our entire squad, which we bought with our own money,” Ahmad continued. “If we were well equipped, in addition to our own regions, we could take part in establishing security in other areas as well.”

Ziyaee disputed claims that they lacked weaponry, adding, “We have provided them with a lot of equipment, but I can’t make any decisions about increasing their salaries, as this is the responsibility of higher authorities.”

The idea of raising militias has been controversial from the start, with concerns over a lack of structure and control. Many Afghans have bad memories of the armed factions whose members engaged in widespread violence and looting in the civil war of the early 1990s.

A lack of professionalism among the ALP has drawn accusations of aggressive behavior and corruption.

Toryali acknowledged that the ALP had some deficiencies, including little knowledge of both the law and policing techniques, but said that further training could resolve these issues.

“They are unaware of military and legal principles,” he said. “If these weak points were strengthened, the local police could help ensure security further afield and the nation will be saved from conflict and the fear of violence.”

For his part, Ziyaee stressed that the rule of law was applied to ALP members too, and those found guilty of any offence would be subject to the full punishment due in law.

“Before a local policeman joins the military forces on the ground, as well as to military training they receive training on appropriate behaviour and other principles and regulations, so they will be well briefed and able to put these principles into practice during their service.”

As well as the behavior of some of these village militias, there have been accusations of corruption. Across Afghanistan, there have been reports of so-called ghost police - non-existent employees whose salaries were fraudulently siphoned of.

Paktika provincial council member Nimatullah Baburi also criticized the ALP’s lack of professionalism, arguing that they lacked combat skills as well as basic legal knowledge, and said that ghost police were a real problem in the province.

The number of ALP members on the payroll and the numbers actually on patrol did not add up, he continued.

“The salaries of these ‘ghost soldiers’ go into the pockets of corrupt officials,” he said. “We have some policemen who have not received their salaries for months and come to us to complain.”

Ziyaee denied that there were any ghost police in the ranks of his own forces. He said that to ensure transparency, salaries were mostly paid through the Kabul Bank and the M-Pesa mobile phone-based money transfer.

Only in the remote districts of Waza Khwa, Gomal, Terwa and Wor Mamay were salaries paid through agents, he said.

For now, however, it seems that the ALP are providing a solution to specific local needs.

“People are pleased with the local police, as they are very helpful and the public also cooperates with them,” said Noor Mohammad, a tribal elder in the Khairkot district of Paktika province. “We want the government to provide military trainings to strengthen them further.”