Some 200 militia members operate in one small district of the restive southeastern province.

Some 200 militia members operate in one small district of the restive southeastern province. 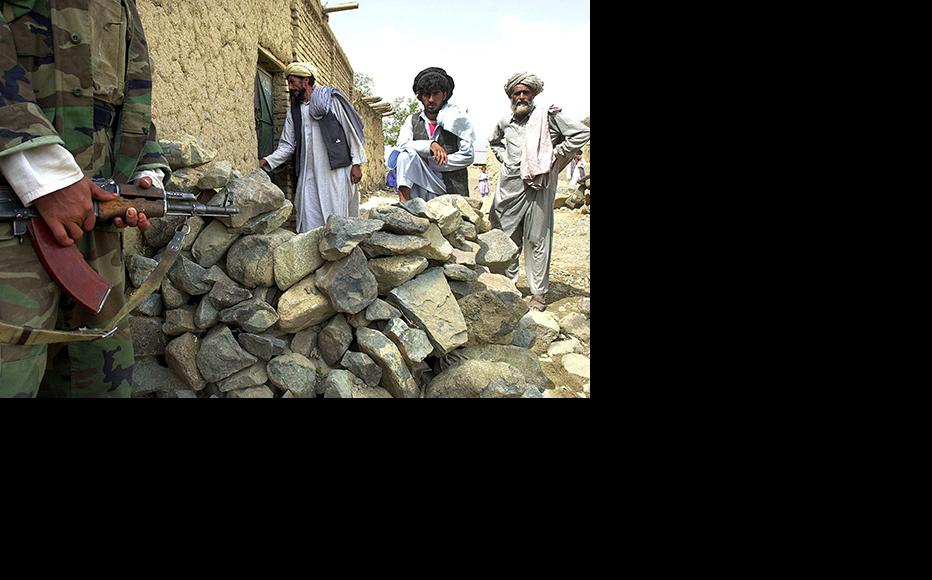 Local police units in a Ghazni district are routinely demanding villagers pay them tributes of money and agricultural goods, a two-month IWPR investigation has found.

The Afghan Local Police (ALP), which emerged from a range of village militias, is separate from the regular national police. Although the 2010 Afghan Local Police initiative brought them under the authority of the interior ministry, there have been repeated accusations that these forces often act with impunity.

IWPR conducted some 40 interviews with residents of a dozen villages in Muqer district, who reported that for the last four years they had been expected to hand over cash payments as well as regularly provide the troops with quantities of wheat, dried fruit, corn and beans.

The ALP local commander acknowledged that his men received supplies of money and food but insisted that they were gifts freely given and were a fair reward for the contribution they made to the community.

As in many other Pashtun-majority areas in the southern half of Afghanistan, the Taleban began regaining influence in Ghazni in the years after 2001. But the harsh policies they imposed, which halted reconstruction and kept schools closed, prompted a backlash. In April 2012, residents of Qadimkhel, a village in the Andar district, organised their own militia to hold off the insurgents.

Similar units were then set up in other district, including Muqer, and these irregular forces became known collectively as the National Uprising Movement. With hundreds of fighters at their peak, members say they improved security and allowed schools and clinics to reopen.

Local policemen now receive three weeks of training, which include sessions on dealing with the public and respecting human rights. The standard monthly salary for an ALP member is 140 US dollars, some 30 dollars less than that of an Afghan National Police (ANP) officer.

Nasrat Rahimi, deputy spokesman for the ministry of interior affairs, said that 30,000 ALP members were currently active across more than 200 districts of Afghanistan.

As they are drawn from the local community, the ALP has often been able to win a higher level of trust from local people. But the issue of local militias remains hugely sensitive in Afghanistan, given the country’s long history of conflict, often involving unaccountable paramilitary groups. Concerns remain about lines of command, discipline and responsibility, and there have been calls by officials and local residents alike for action to curb corruption and abuses.

In Muqer, the district governor Ghulam Habib said that the ALP were active in 50 out of the district’s 160 villages. The district, in the southwest of Ghazni and about 110 kilometres from the provincial centre, has a population of some 160,000.

Locals said that around 200 ALP members had set up security checkpoints in 15 villages, each manned by a dozen men equipped with Kalashnikovs and PK machine guns.

Abdul Matin, the ALP commander in Muqer, explained that his troops’ monthly salaries weren’t enough to cover their basic needs, meaning they relied on what he described as donations from local well-wishers. Matin added that his forces put their lives on the line for the community, claiming that he had lost 110 men in fighting with the Taleban over the last four years.

The 45-year-old denied that his forces extorted money from locals. However, he confirmed that he had ordered troops under his command not to reject money or foodstuffs such as wheat, raisins or beans when people offered them.

Hazratullah, a 30-year-old resident of Kohband village in Muqer district, is an ALP who serves under Matin’s command. He said they collected money three times a year, as well as other goods which were sold to shopkeepers in Muqer’s market and the proceeds handed over to Matin, who distributed them among his men.

But locals allege that these contributions are not voluntary. They told IWPR that people who refuse to deliver such tributes risk have their levy doubled or even tripled. Others face being forced into hard and demeaning work such as cleaning ALP checkpoints or repairing buildings for them.

They explained that wheat was gathered after the summer harvest and raisins and beans after the autumn harvest. In addition, each family had to pay 10 dollars to the ALP each winter.

More than two-thirds of the villagers interviewed told IWPR that ALP were known to exhort money from locals at gunpoint. They recounted how, shortly after the ALP were established in the area, armed men began visiting all the houses in the villages to ask resident to come to meetings held in the local mosque.

At these meetings, the villagers were told that they needed to start handing over both money and agricultural goods to the ALP and that refusal to do so would be met with fines and other punishments.

Local people said that the ALP’s extortion was systematic and organised, with representatives in 50 villages delegated to collect money from people.

IWPR spoke to two villagers who had been recruited by the ALP to gather money and food items from local people.

Abdul Rahim, a 50-year-old farmer from the village of Chambran, said that over the past nine months he had collected 400 dollars in cash, 1,000 kilos of wheat, and 2,100 kilos of raisins and beans from 45 local families.

Ahmad Shah, a 35-year-old shopkeeper in Akhund Khel village, said that he had collected 3,200 kilos of wheat, 1,280 kilos of beans and 960 kilos of raisins from 32 local families in the same time period. He had hauled these goods on a tractor to the police station in Akhund Khel.

Mohammad Ibrahim, a 52-year-old farmer in the village of Chahar Qalah, told IWPR said that he had been forced to pay the annual tax of 10 dollars as well as handing over half of his entire harvest, amounting to 28 kilos of raisins, 42 kilos of beans and 105 kilos of wheat.

“I work very hard all year, but police extort half of my agricultural products from me,” he said.

Despite the extent of these claims, Ghazni officials said that they had received no complaints about the behaviour of the ALP in Muqer district.

Arif Noori, spokesman of Ghazni governor Ghazni, and provincial police chief Mohammad Zaman both said that they had not heard any allegations of extortion.

However, Muqer governor Habib said that he was aware of local resentment over the ALP’s behaviour.

“People complain to me, but I can’t do anything,” he said, arguing that he simply lacked the authority to take steps against the ALP. Habib said that he was about to establish a people’s council in the hope of exerting some pressure on the local police troops.

Asked what he did with the funds, Matin said that even 100,000 dollars would not be enough to ease the financial burden on his forces. Matin said that he also handed out cash payments to sick or wounded ALP members, or to those who needed help paying off their debts.

“My troops still owe shopkeepers in Muqer’s market 70,000 dollars and I have to pay off my troops’ debts of with the money donated to us by local people,” he continued.

For their part, ALP members say that it is only fair that the local community contribute to their upkeep.

Muhibullah, who works under Matin’s command at a security checkpoint in Chahar Qalah village, said that what they received from local people was quite legitimate.

He added, “We protect and defend the people of this village both day and night, so the villagers have to pay us money.”