Afghan Farmers Ask Military to Pay Up for Land

Afghan Farmers Ask Military to Pay Up for Land 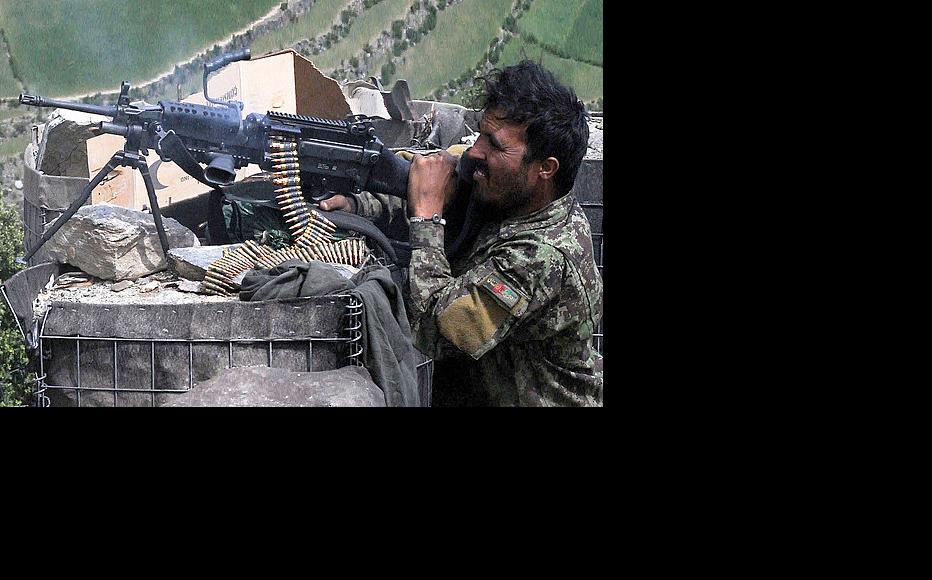 Afghan army soldier returns fire during an insurgent attack on a military outpost in Kunar, April 2010. (Photo: ISAFmedia/Flickr)
The link has been copied

Residents of Kunar province in eastern Afghanistan complain that large swathes of their farmland have been appropriated to build military bases, and the owners have received little or no compensation.

Kunar, a mountainous province bordering on Pakistan, has been a centre of insurgent activity, and around ten international military bases have existed there since 2001. Initially used by NATO troops, the bases have now either been abandoned or turned over to the Afghan National Army (ANA) as international forces prepare to leave the country next year.

The owners – who claim they are harassed by the Taleban for allowing government forces to use their land – say that the transfer of responsibility further complicates their attempts to claim compensation.

He says that all he ever received in return was a one-off payment from NATO’s International Security Force for Afghanistan (ISAF) equivalent to 200 US dollars.

“This is the seventh year that the foreign forces are using my land,” Faqir said. “I work as a school assistant and I’ve got nine family members to support. I can’t feed them.”

A tribal leader in Wata Pur, Haji Muhammad Sher Khan, said the area taken up by the base used to be fertile and productive agricultural land.

“The foreigners have done us serious harm,” he said, adding that the presence of a NATO base had led to insurgent attacks in which local people suffered. Two years ago, he said, a Taleban attack on the base left about 20 civilian casualties.

Several years of lobbying for a solution to the issue had come to nothing, Sher Khan continued.

“Once a commission came from the capital Kabul to resolve the problem with these lands, but it didn’t work at all. Additionally, at the end, the commission collected 100,000 afghanis [1,800 dollars] from people to cover their expenses,” he said.

Promising to raise the issue with central government, Jalala said, “In those areas where the national army is staying on, the defence ministry is obliged to pay something to the owners of the lands.”

The head of Kunar’s provincial council, Haji Mia Hasan Adil, said he had raised the issue with the foreign military on a number of occasions, to no effect.

“This is a huge injustice to the people,” he said. “The foreigners must have their own laws as well… requiring them to pay what is due to those land owners.”

IWPR reporter approached ISAF for comment on the issue, but was unable to obtain a response.

Land seizures for military use have been an issue in other parts of Afghanistan, too. (See, for example, Military Land Seizures Feed Afghan Anger.)

In Kunar, the situation is complicated by uncertainty over who is supposed to pay compensation.

Local residents say that on previous occasions when they have taken their concerns to ISAF headquarters in Kabul, they have been told that the Bonn Agreement, which laid the foundations for the post-2001 state, stipulated that the Afghan defence ministry would pay for land used for foreign military bases.

Defence ministry spokesman General Daulat Waziri confirmed to IWPR that financial compensation, or an equivalent piece of land, would be provided to anyone whose property was occupied by the ANA.

“The ministry of defence does not take, and has not taken, anyone’s land by force,” he added.

The stalemate over compensation has fuelled anti-NATO sentiment in the area.

“In Kunar, the foreign forces have killed and tortured civilians, and they still keep the land they forcibly seized,” said tribal leader Haji Muhammad Qayum. “The foreign forces built their bases in areas where villages and houses already existed. Who should people go to to demand their rights? The government blames the foreigners. Once the foreigners leave, where will we find them?”

Rafiullah Haidari, a member of parliament from Kunar, vowed to pursue the cases of those whose land had been taken from them.

“Once this has been investigated, those whose land was taken from them by foreign forces without compensation will be taken care of,” he promised.

Landowners say they face harassment from the Taleban, who accuse them of aiding their enemies.

Ruhulamin, a resident of Wata Pur district, said he had received threats from insurgents for giving his land to the foreign forces.

“We are caught between two millstones. The foreigners have seized our lands by force and the Taleban threaten to kill us because of this. We don’t know what to do,” he said.

Zabihullah Ghazi is an IWPR-trained reporter in Afghanistan.