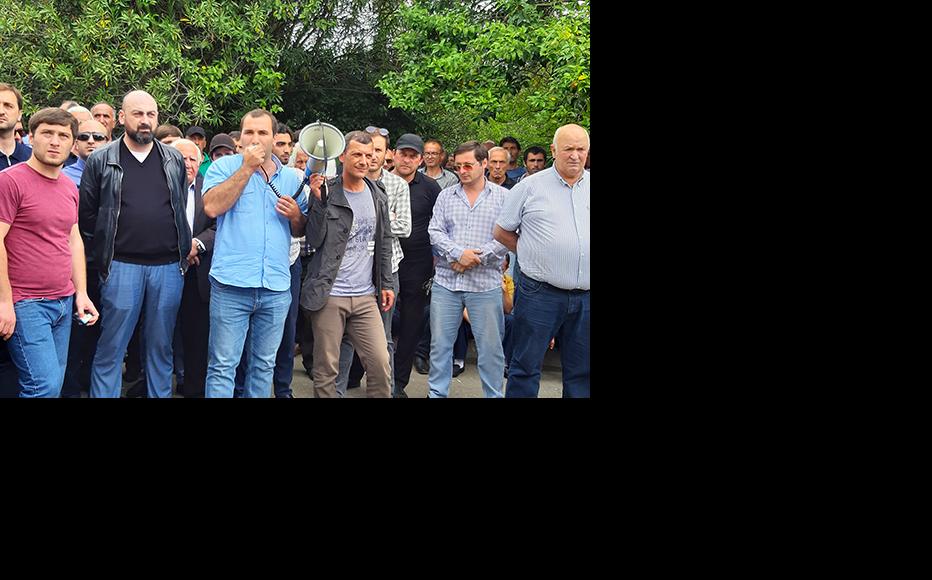 Peaceful protest in front of the parliament of the breakaway Abkhazia. Mizan Zukhba and Teimuraz Khishba, leaders of the opposition party Amtsakhara addressing their supporters. (Photo: Anaid Gogoryan/IWPR) 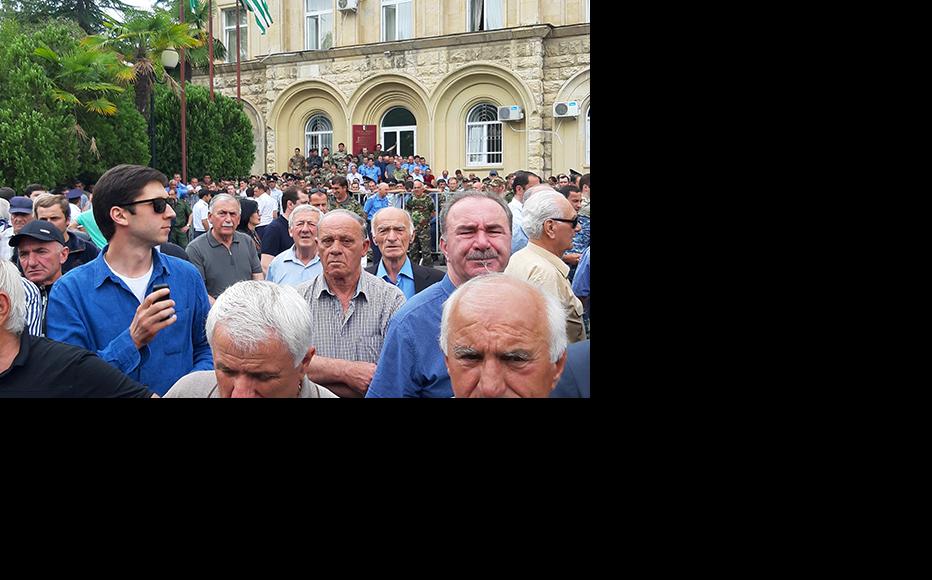 Protesters of the opposition party from the Tamish village demand the postponement of the date for presidential election. (Photo: Anaid Gogoryan/IWPR) 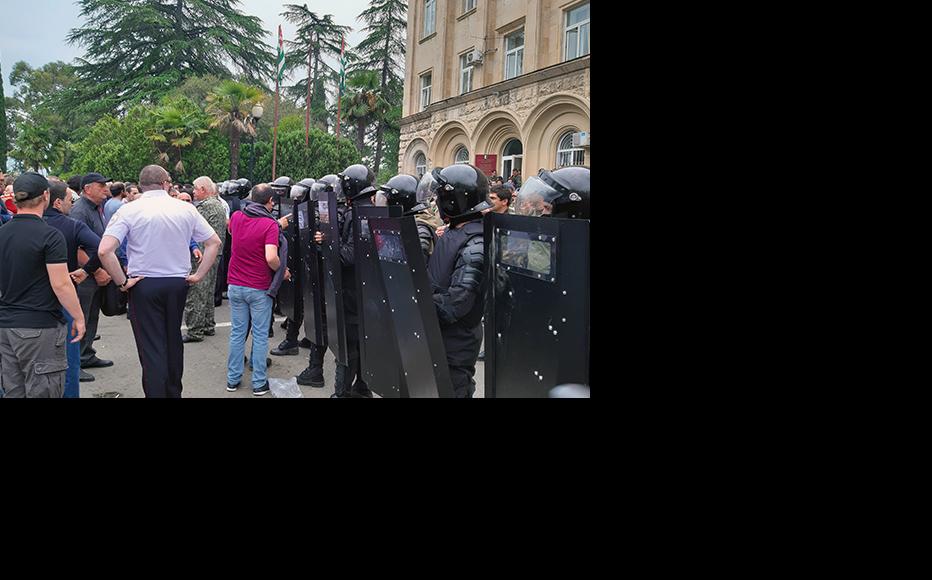 Five hundred policemen were assigned to ensure safety during the peaceful demonstration on May 20-21. (Photo: Anaid Gogoryan/IWPR)
The link has been copied

The decision to postpone elections in Abkhazia following the sudden illness of the opposition candidate has highlighted ongoing political chaos in the breakaway republic.

The decision came as a compromise between President Raul Khajimba and opposition leaders after their candidate Aslan Bzhania suddenly fell ill due to an alleged poisoning in April.  Presidential elections will now be held on August 25 rather than July 21.

On April 18, Aslan Bzhania was hospitalised in Moscow in a serious condition. Shortly after, two of his bodyguards - Kiasou Darsalia and Levan Bzhania - were also taken to the hospital with similar although less severe symptoms.

Results of medical testing in Germany appeared to indicate that Bzhania had been poisoned. On May 16, protestors in his home village of Tamysh in Ochamchire demanded that an investigation be carried out and elections be delayed. The National Movement for Protection of Statehood (NMPSA), the largest opposition party, also called for the vote to be postponed until the autumn.

Khajimba held a security council meeting on May 17 which decided to form a group of professionals to look into Bzhania’s condition, along with Russian counterparts.

However, at an emergency session of parliament on May 20, 17 out of 32 members voted against rescheduling elections to November 23. According to the Abkhaz constitution, parliament must announce elections no later than four months before the current president leaves office and choose a date no earlier than three months and no later than two months before the term expires.

Khajimba told supporters on May 20 that Bzhania’s condition should not be exploited for political purposes.

“The opposition or some other individuals representing this opposition are trying to portray as if the authorities are involved in these processes,” he said. “I'm not going to prove the opposite and make any excuses. There are relevant prosecution authorities for that. I want Bzhania to recover and that nobody could use his name for speculative purposes.”

The decision not to delay elections was greeted by protests, including an NMPSA rally outside parliament and roadblocks in Tamysh and Gagra. Khajimba labelled these “indications of attempts to seize power” by the opposition.

Nonetheless, following negotiations between the opposition and the president mediated by defence minister Mirab Kishmariya, elections were postponed until August 25, despite the constitutional difficulties this will pose.

Teimuraz Khishba, the head of the NMPSA, welcomed the move.

“It was accepted positively, at least those people who supported peaceful action, reacted positively to this,” he said, adding, “We have objective grounds to believe that Aslan Bzhania will be able to participate in the elections.”

Others were less impressed.

“It is miserable, but still a compromise disproportionate to the dramatic situation in the country,” said Irina Agrba, chair of the Women in Politics NGO. “The president’s compromise is like a pittance for the opposition.”

Isida Chania, a journalist, said that Bzhania’s plight had simply been used by the entire political elite for their own ends.

“In my opinion, this is a very bad precedent for parliament, for people who call themselves the opposition and for the whole state in general,” she said. “Everything that has been going on during these two weeks looks like political blackmail. The parliament has proved that it would make almost any decision if even a small number of people exerted some pressure on it.”

Politics in Abkhazia have been unstable since the conflict with Georgia in the 1990s. Tbilisi and much of the international community continues to see Abkhazia as part of Georgia. Russia is still the only major country that recognizes its independence.

Inal Khashig, the editor in chief of the Chegemskaya Pravda newspaper, said that the developments had only served to further complicate this situation.

“Now we have to amend the constitution again and postpone the elections. As a result, nothing good came out of this situation. As for postponed elections, the president and the opposition agreed, but without the parliament,” he said, adding that he was sure Bzhania would not be able to participate.

The entire crisis could have been avoided if the authorities had adequately responded to questions about Bzhania, he continued.

“All through the month there was an information vacuum, which was filled with rumours about poisoning. Later a paper came out from the Munich laboratory and of course, it turned into a kind of detonator for this political crisis.”

Chief forensic expert Genady Bobua also cast doubts on the German report that indicated Bzhania had been poisoned, arguing that the document had only one signature and no seal.

On May 21, prosecutor-general Zurab Achba announced that, according to a Russian medical assessment, Bzhania had not been poisoned. He said that Bzhania had acute motor and sensory polyneuropathy with tetraparesis, cranial nerve involvement and bulbar syndrome, respiratory and vegetative disorders.

“The given diagnosis indicates an autoimmune, neurological disease. And to get sick with all three diseases simultaneously is highly improbable, but on the other hand, we have pneumonia as a secondary disease, which has complicated the course of Guillain-Barre syndrome,” said neurologist Nara Ivanba.

“It is clear that Bzhania was one of the favorites of the election race,” he said. “The authorities started to act only when people went out to the streets. For some reason, only after public protests they were able to take some measures. I think the government’s role in whipping up the situation is crucial. Of course, the opposition failed as well; they have to understand that there must be less fuss and more control in their actions.”

Agrba agreed that the opposition needed to change their tactics.

“Despite the sudden changes, the opposition is not looking for a new candidate,” she continued. “Some of them consider it unethical, but time is against them. There are people who deliberately mislead the opposition about the fast recovery of Bzhania and in this way they fail to activate their resources and prepare for upcoming presidential elections.”

However, Agrba argued that the opposition must unite to agree on a new common candidate.

“We have people who are very decent and well prepared in the context of politics; they just need to be noticed,” she said. “The chances to win are quite serious, but due to a misunderstanding within the opposition forces, they might lose this battle to this sly and inept government.”

Kashig agreed that Bzhania’s illness and the resulting chaos might increase the chances of Khajimba winning a second term in office.

“But even if he is elected,” he continued, “it is less likely that he will stay the whole term in office, because all these five years there have been serious problems of keeping power in the context of protests and social unrest.”

Giving Voice, Driving Change - from the Borderland to the Steppes
Abkhazia
Elections
Connect with us