As opposition considers whether to field one candidate or several, many Abkhaz are alarmed at the precedent set by ousting leaders, even unpopular ones.

As opposition considers whether to field one candidate or several, many Abkhaz are alarmed at the precedent set by ousting leaders, even unpopular ones. 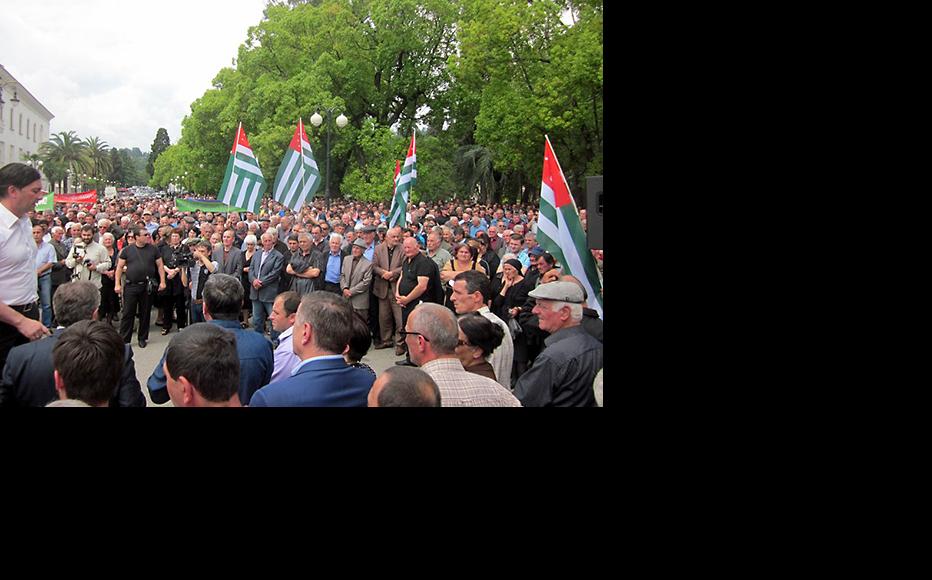 Protests in Abkhazia have forced the president to step down. (Photo: Anaid Gogoryan) 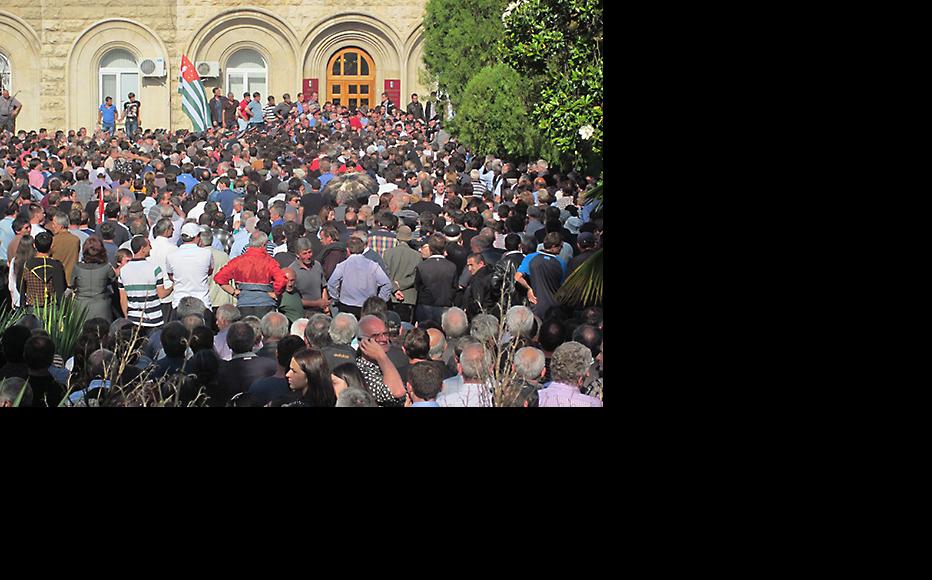 A presidential election has been called for August. (Photo: Anaid Gogoryan)
The link has been copied

Abkhazians will need to wait another fortnight before finding out who is standing as a candidate to replace Alexander Ankvab, who resigned as president on June 1 after thousands-strong protests.

The demonstrations were sparked by economic concerns and by Ankvab’s policy of giving passports to ethnic Georgians. Ankvab said that he was the victim of a coup and that he only resigned to prevent wider conflict in Abkhazia.

Parliament anticipated Ankvab’s resignation by a day, voting on May 31 for early elections and appointing its speaker Valeriy Bganba as acting head of state. On June 5, parliament approved Bganba’s decrees sacking the heads of the Tkuarchal, Gal and Ochamchire districts – the areas where the ethnic Georgian population is concentrated.

Vitaly Gabnia heads the Aruaa war veterans’ union and sits on the Coordinating Council, an umbrella group of political parties and civic organisations opposed to the Ankvab administration. He told IWPR why the protest movement had taken off.

“There were two causes. First, the issue of passports to citizens of Georgia, in violation of [Abkhazia’s] laws and constitution. Second, the lack of growth in the real economy, on which our independence and sovereignty are based. Two-thirds of the budget is being paid by another country [Russia], and this proportion will grow every year.”

It is currently unclear whether the opposition groups that united to unseat Ankvab will field a single candidate for the election, slated for August 24.

Gabia said his group, Aruaa, would hold a congress on June 19 and discuss a political programme and a prospective candidate.

“We are holding internal consultations. They are very emotional, but no one should being in any doubt that we will get the result we want,” he said.

Most observers believe that if the opposition unites behind Raul Khajimba, head of the Forum of National Unity, he is likely to win.

“Everything is changing very fast, and it’s hard to say what will happen in three months. But Khajimba has a good chance as long as he can convince the diverse opposition forces that they will all lose out if the personal ambitions of various leaders result in disunity,” Inal Khashig, editor of the Chegemskaya Pravda newspaper, told IWPR.

“If a unified opposition that embraces 11 different parties presents one candidate, and that candidate is Raul Khajimba, then he will win. He could still win if there are two candidates. But he’s unlikely to make it if there are three.”

In an Abkhaz presidential election held in 2004, Khajimba was openly backed by Moscow, but still lost, after a bloodless uprising in favour of his opponent. Observers doubt the Kremlin will show any preference this time, especially since there is no likely candidate who would alter Abkhazia’s close ties with Russia, its only international ally.

Many commentators agree that if the new president does not, or cannot, turn the economy round, Abkhazia could see a repeat of the protest cycle.

“Whoever comes to power, I don’t envy them, because they will have to launch real reforms,” Khashig said. “And whether things turns out well or badly, they will be constantly on edge, and it isn’t even clear they’ll be able to serve out their full term. It’s clear now that any dissatisfaction, any protest could lead to a storm of the presidential palace.“

Artur Mikvabia, a member of parliament, agreed that this risk would dog any new leadership.

“If the new government does not implement reforms, the same thing will happen again,” he told IWPR. “The executive realised that the protest was strong, and decided not to drive the people to bloodshed. He [Ankvab] did the right thing, but this wouldn’t have happened if he had implemented reforms.”

Liana Kvarchelia of the Centre for Humanitarian Studies worries that a dangerous precedent has been set.

“The president has gone, but the aftertaste lingers on. Even people who really didn’t like Ankvab are saying the same thing,” she said. “Why do many people – even those who didn’t vote for him – feel offended by this? It’s because no one asked their opinion, because this decision was anti-constitutional,” she said. “I don’t know who will win the next election, but I do know that our state has lost out. There are many difficulties ahead, and we have set some dangerous precedents. It will take us a long time to repair the damage.”

Abkhazia
Protests
Connect with us